For funsies, here's an animated gif version I whipped up. 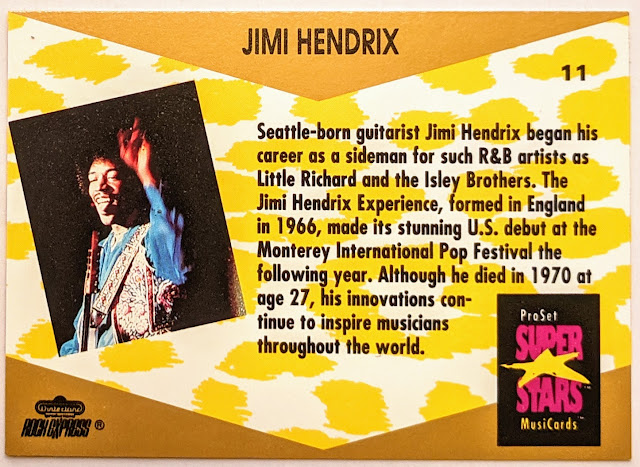 If you had to sum up Jimi's life into just three sentences, I suppose you could do worse than the back of this card. Looks like the back photo may be from the same show as the front photo from the previous card, judging by the angle and outfit.

It'd be tough for me to crown a personal favorite Hendrix song, but I might have to go with "Voodoo Child (Slight Return)". Such a ballsy song. If you ever need to psych yourself up with a blast of confidence, this is a good musical selection.

And the second verse has the beautifully existential line:

I kinda forgot that I wanted to try recording quick covers for these posts. Not that anyone really cares much, but it's a good exercise for me. I used to play and record music a lot more often in the 90s and 00s, but have fallen way off in the past decade. Here's a little acoustic version recorded just for this post: Fiberoctopus-Voodoo_Child.mp3 It's a pretty rough rendition, won't deny, but hey.. for fun. 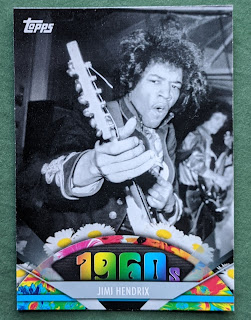 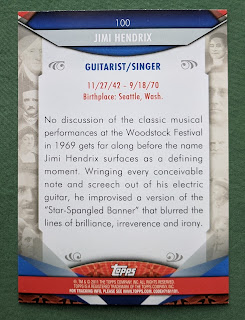 How about other Jimi Hendrix cards? Well, he's got decent cardboard representation besides his MusiCards (see his TCDB list), most recently popping up in a couple "News Flashbacks" inserts from Topps Heritage. And Topps honored Jimi with card #100 in their popular 2011 American Pie set. The back write-up focuses on his Woodstock performance (which strangely wasn't mentioned at all on his two main MusiCards [though he also has a promo MusiCard that does mention the iconic festival.]). 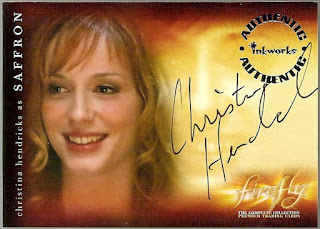 It doesn't count, but my best "Hendricks" card is an autograph of the lovely Christina Hendricks.

JediJeff has owed me a Carlos Correa relic card FOR OVER TWO YEARS NOW but despite that, he's still a homeboy of mine, so when he suggested a Terry Kath custom in the previous post, I couldn't say no. (Not the most flattering photo of Terry, but went with this one for the Blackhawks jersey.)

Jimi Hendrix apparently once mentioned Terry Kath as a favorite guitarist of his based on the seminal Chicago Transit Authority (1969) album, quite the "Praise from Caesar" moment, and the two players both appeared to be influenced by each other. While Chicago would go on to be best remembered for their horns and 80s ballads, back in their early days they were known for "fusing brass and jazz with a soulful rock and roll feel" [1], with Kath's cutting guitar playing being key to their sound. Unfortunately, Kath was a bit of a gun nut, and accidentally shot himself dead at age 31 in 1978. The band ultimately decided to carry on, had a very prosperous run in the 80s, and are still active today. I plan to eventually cover Chicago further in a future post (They didn't get a real MusiCard).

Deep breath, guys. ... Today's main featured band in the Custom Corner is perhaps the most divisive band in rock history: The Red Hot Chili Peppers. They've been around a long time and had a lot of hits. Pretty much everybody has an opinion on them.. either you love 'em or you hate 'em, with not many people being indifferent to the band. My wife and the cardsphere's own Night Owl are among the many people who would enthusiastically be in favor of never hearing another RHCP song for the rest of their lives.

But me? I love 'em. In fact, for this post, I'm just going to focus on their early days of the 1980s. In the future, I plan to do another Custom Corner installment for the 90s portion of their career, eventually followed by an installment for the post-2000 years. (But don't worry, haters; those likely won't rear their heads for several months, perhaps years, with the rate I'm currently churning out posts here.)

The Chili Peppers could have easily been included in the 1991 MusiCards set. Although their mainstream breakout album, Blood Sugar Sex Magik, wasn't released until the cards were already on shelves (September 1991), they still had made a name for themselves by that time, with hits like "Higher Ground" and "Knock Me Down" seeing decent rotation on MTV in 1989 and 1990. 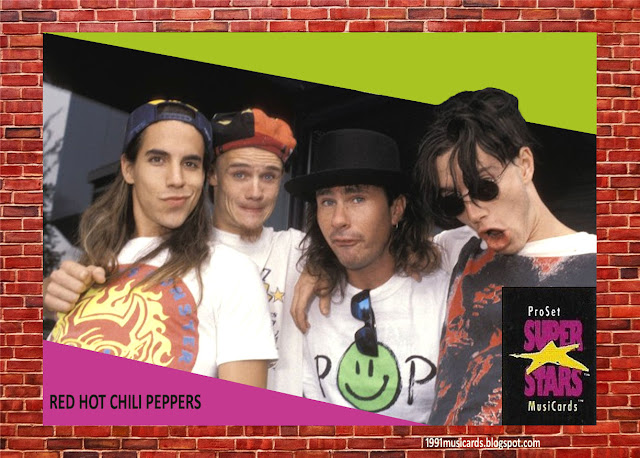 But alas, they received no MusiCard, so here's a custom. Note the Jimi cameo.

As disciples of Jimi Hendrix, I figured they'd be a good choice to pair with this post. The Peppers have covered several Hendrix songs over the years, including "Fire", "Castles Made of Sand", and "Crosstown Traffic", among others. Their hit "Dani California" makes an allusion to "Purple Haze" in the guitar solo. They wear their devotion to Jimi on their sleeve. In fact, Flea literally has a tattoo of Hendrix on his shoulder, which he got as a teenager.

Back in the day, my best friend Doug's favorite band was RHCP, so because of that they were always on my radar. Luckily for me, I liked them. ..not as much as Doug, but I was still a big fan. I remember many afternoons in the early 90s hanging out with him and listening to the Chili Peppers and occasionally watching VHS tapes Funky Monks (behind-the-scenes documentary on the making of Blood Sugar Sex Magik) or Positive Mental Octopus (compilation of their 80s music videos). My first big rock concert was RHCP in 1996, but I suppose that's a story for another day.

My first introduction to the band came circa 1988 when Doug's cousin Sasha (male in his early 20s) visited Doug's family for a couple weeks from Germany. Sasha brought with him a cassette of Freaky Styley that he loved to listen to and talk to people about. Doug and I made fun of him about it behind his back, of the opinion that he was a crazy foreign guy into weird music. But I suppose Sasha had the last laugh, as both Doug and I started to come around to the Peppers by 1989's Mother's Milk. Then when the fall of 1991 rolled around, we both became big fans of Blood Sugar Sex Magik, though Doug dove deeper than me, and RHCP was undeniably his favorite band for 8th grade and all of high school. His allowance would often go towards buying rare import CDs of the band, magazines featuring interviews with band members, RHCP shirts, etc. He had a paperback unauthorized biography on the band that was like his bible, reading and re-reading it, frequently sharing factoids he picked up from its pages.

Was able to whittle this down to a tight 20 tracks. The first half consists of highlights from the first 3 records, then the second half is the majority of Mother's Milk.

The original guitarist Hillel Slovak died in 1988 of a heroin overdose. Both he and replacement John Frusciante were big Hendrix junkies, no surprise. I'm a big fan of Frusciante's solo stuff, and will likely feature him in a future Custom Corner.

Original drummer Jack Irons left the band after Hillel's death-- the four original bandmates were all good friends and remaining guys were all very shaken up by the event, as you can imagine-- but eventually, he had a stint with Pearl Jam in the mid 90s (and in fact, Jack was responsible for originally putting Eddie Vedder in touch with Jeff Ament and Stone Gossard in 1990). Jack's got some cool solo stuff, too, with my favorite songs of his being "Come Running", "Sonic Tonic", and "Doubloons".

And that'll do it for this post. Any thoughts on the early output of RHCP, let me know in the comments. When we'll continue with the Chili Peppers story, I'm not sure.. but eventually. As for Jimi, he's scheduled to make a reappearance on the blog once we get into the Historic Concerts subset at card #249.

But up next, on the runway preparing for takeoff is Jefferson Airplane.
at December 01, 2019