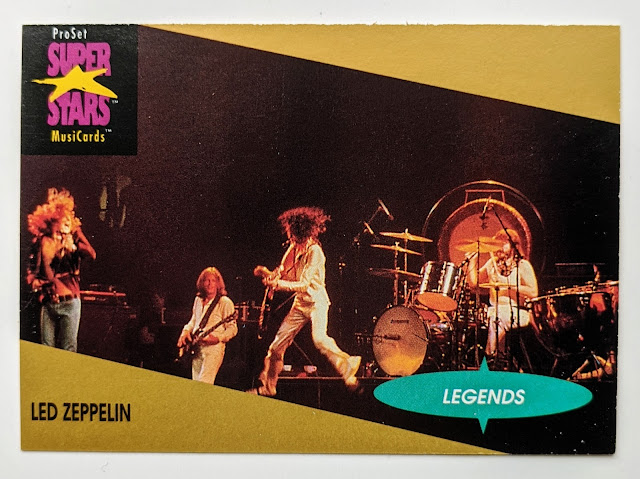 Here's a nice action shot of Led Zeppelin to close out the Legends subset in the first series of the 1991 Pro Set MusiCards SuperStars set. We'll come to a few more of these gold Legends once we eventually hit Series 2. But at the rate I'm going that'll be years from now! LOL 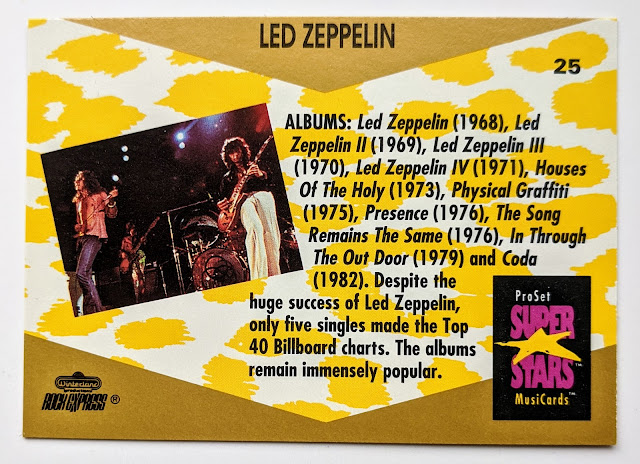 The back features another cool live photo. That picture probably would have made a cool card itself, but alas, wouldn't work with the corner-killing design of the set, relegating it to no more than a back photo. Of course they could easily make it work with a little tweaking like I do with my customs sometimes, but the folks at Pro Set at the time kept things simple without much "photoshop magic" to help them out.

The write-up on the back lists the albums and gives a little dig at them not having more top-selling singles. But hey, hard rocking tunes like theirs aren't exactly easily embraced by the masses. The likes of Olivia Newton John and the Bee Gees were more palatable at the time.

According to Spotify, their most popular song is "Stairway To Heaven". Well, I already featured that in a previous post, so we'll go with the runner up...


"Immigrant Song" is a good one, though I'm a little surprised to see it ranked as their second-most popular track. Hell, it didn't even make the cut for my personal "best of" disc for them!

Even after 5 consecutive cards, Led Zeppelin still isn't done making their mark in the 1991 MusiCards set, popping up again in the Historic Concerts poster subset near the end of Series 1 (#258). Hopefully this blog (and myself!) stay alive long enough to eventually get there, though we've got a lot of early 90s pop to get through first.

Now that we're at the end of the subset, let's take a closer look at the list of Legends in the set.

Note that it's in alphabetical order, but with one funny quirk: Led Zeppelin is sorted under Z instead of L. If those rules were consistent, Jefferson Airplane should have been card #1!

As far as acts that could have taken that alphabetical top spot if they were included, well ABBA would be a strong contender, but sticking with the classic rock leanings of the Legends checklist, there's a clear favorite...

Love 'em or hate 'em, you can't deny AC/DC is one of the biggest rock & roll bands of all-time. 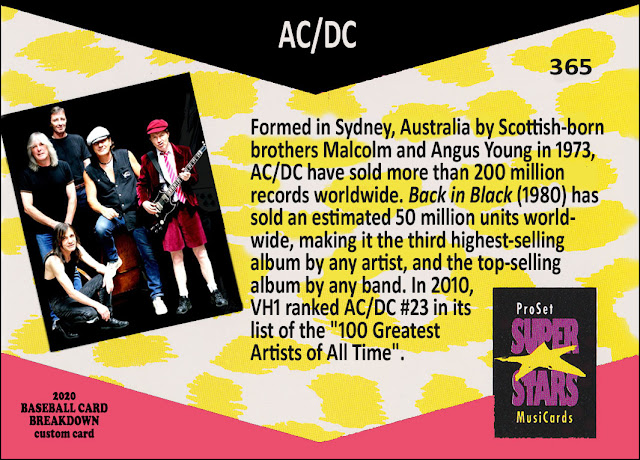 Per usual, I try to keep the bio tight for well-known acts, but if you'd like to spend a while learning more about the band's rich history, I'd point you to their wikipedia entry.

I can't say I'm an ACϟDC aficionado or anything, but I dig their hits. You know, like...

...good stuff. For me, these were all "oldies" by the time I heard them, with the exception of 1990's "Thunderstruck". I can remember when that was a hot new track.

You'd figured they'd be an easy choice for getting a 1991 MusiCard. That album, The Razors Edge, went multi-platinum and reached the US top ten. But I guess Pro Set couldn't secure the licensing or what have you.

As a Padres fan during the Trevor Hoffman era, I sure heard "Hells Bells" a lot. Used as his entrance music, those opening bells and guitar riff helped psych everyone up for Hoffy to nail down another save.


Where are they now? Well, AC/DC is still rocking, technically. They soldiered on after the death of Bon Scott back in the day, and the more-recent passing of Malcolm Young. Singer Brian Johnson is nearly deaf now, and was replaced by none other than Axl Rose for their live gigs in recent years. But rumors are they've got a new (farewell?) album in the can ready to be released one of these days.

I for one wish them the best and hope they never go away. One of the few remaining bands that've been around for my entire lifetime. Rock & Roll will never die. Right?


Do you have any thoughts or memories to share regarding AC/DC? Favorite songs of theirs? Let me know in the comments if you wanna.


Big sea change coming up for the blog, as we leave the classic rock of the Legends subset behind and finally dive into the pop music landscape of the late 80s / early 90s. Should be a fun trip. I'm excited for the journey! (And don't worry, still plenty of rock left in the set, too.) See you soon.
at August 28, 2020 6 comments: