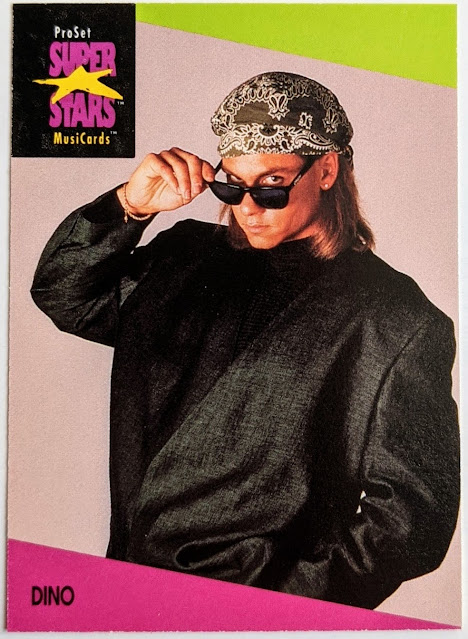 Here's #41 in the 1991 MusiCards set. When I see this card featuring a smooth young dude in a bandana peering over his sunglasses, it makes me think of the guy who did that "Rico Suave" song. But no, that was Gerardo (who isn't in the US set, but has a MusiCard in the UK edition). Dino on the other hand is best remembered for his (That's the Way it Has to Be, Because That's the Way) "I Like It" song, as well as his (I'll Be Your) "Romeo" song.

When old-timers hear the name Dino, they might first think of Dean Martin. That's probably the suave vibe Dean Esposito was going for when he decided on his stage name. But I think most of us probably think of the Flintstones' pet. I remember chuckling about that with my friends when Dino started getting airplay, though I admit I did kinda like both "I Like It" and "Romeo". 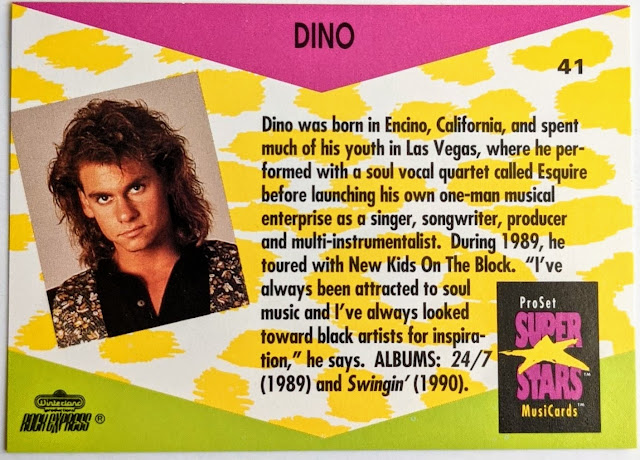 Dino released one more album after this card came out, 1993's The Way I Am, scoring another Top-40 hit with a spunky cover of "Ooh Child", the soft soul classic from 1970. After that, his singing career sputtered out and he focused on writing and producing, working with the likes of Sheena Easton. "Broken Promises", a song he wrote for singer Tonya Mitchell, reached #38 on the US Top 40 in 2001.
The back photo reminds me of a Zelda 2 poster I got from Nintendo Power magazine back in the day: 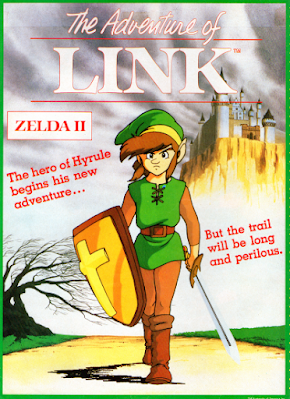 See? Throw some pointy ears on Dino in that back photo and you've got Link come to life.

Or maybe I'm just a weirdo. LOL. I attempted to do a Link drawing based off that poster as a kid (and think I still have it in storage somewhere), so it's stuck in the back of my brain.

I'm tempted to ramble about Zelda 2 for a while now, but that'll have to wait for another day. It's time for the 30-year rewind. 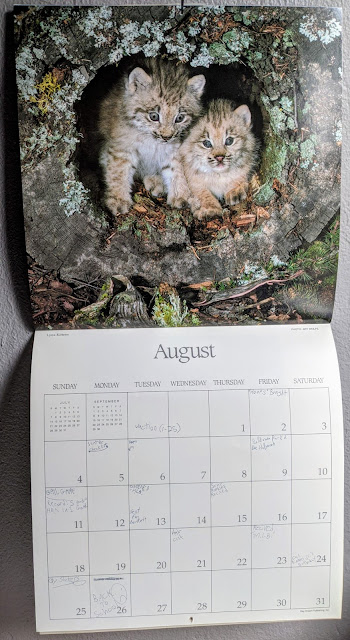 A cute pair of cuddly lynx kittens in a hollow log preside over August of 1991. 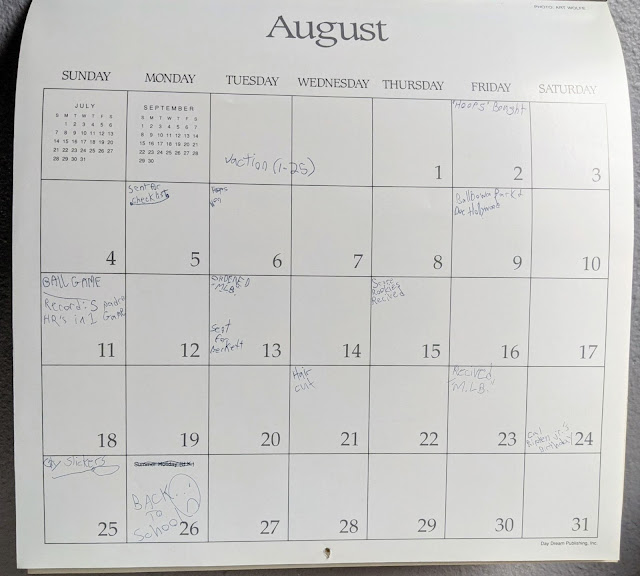 I'm totally confused what my actual summer vacation was in '91, because it seems like we've already seen at least at least a couple "back to school :( " days in the middle of this calendar. But regardless, looks like I packed in some fun before my summer came to an end. 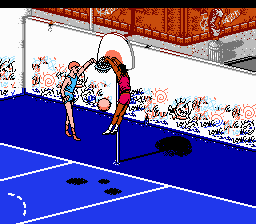 August 2nd saw me add a new NES game to my video game collection with Hoops. I think that's the only basketball game I've ever played much. It's decent. Looks like I played through to the end a few days later-- pretty sure that says "Hoops Won" on 8/6-- though it's not really that kind of game,  more for one-offs. I remember lots of "pick up games" versus my buddy Doug. In later years, we'd also occasionally head down to the old middle school to shoot hoops on the outdoor courts after school hours or on the weekends. Neither of us were all that good, but it was a fun way to kill an hour or two. Even deep into my 20s, I'd sometimes clear my head shooting hoops alone. These days, I've got a box attached to a tree in the backyard that I try to throw pinecones into. It's not exactly a basketball hoop, but still a thrill when I make a deep "3-pointer".

8/5 says "Sent for checklist".. I wanna say that was for a minor league card set checklist? Don't really remember.

Then that Friday 8/9, a few family members and I went to Balboa Park and then saw Doc Hollywood in the theater. The Michael J. Fox film had debuted the week prior. I liked it fine, though it weren't no Back to the Future. My lasting memory of the experience was when the audience is graced with a tasteful scene featuring the lovely female lead (Julie Warner) walking out of a body of water with her funbags out-- very intriguing to a teenage boy, but a bit awkward while sitting in a theater next to your mom. 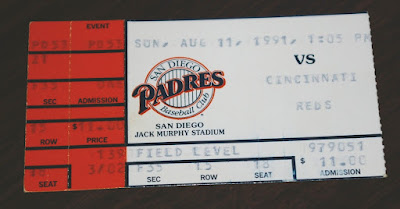 Went to a ballgame at Jack Murphy that Sunday, 8/11/91. It was a good one, with my Padres breaking the team record with 5 homers on their way to roughing up the Reds 13-0. Bip Roberts went 4-4, going deep twice, cementing himself as one of my favorite players. Other Friar favorites I got to watch that day included Tony Gwynn, Fred McGriff, and Benito Santiago. Notable names I witnessed in action from the Away team included Barry Larkin, Chris Sabo, Billy Hatcher, and Paul O'Neill skippered by Lou Piniella, who probably wasn't thrilled with his squad's performance that afternoon.

Cincinnati's front office didn't forget the boppin' Bip gave their team, and after the season, in a black day for Padres fans, they traded jerk-ass Randy Myers to San Diego in exchange for the renowned Mr. Roberts. Man, such a dumb move by then-GM Joe McIlvaine.

But back to the calendar, on 8/13, I was buying more baseball-related stuff, though I can't recall the specifics today ("MLB" doesn't seem to be a video game I remember owning, so I'm not sure what it was; and I don't remember what I was ordering from Beckett, but probably a couple back issues). Then a couple days later I got the 1991 Score 100 Hottest Rookies box set I had sent away for. Frank Thomas was the big card there, but I liked that it had many lesser-known rookies too that I welcomed into my collection. 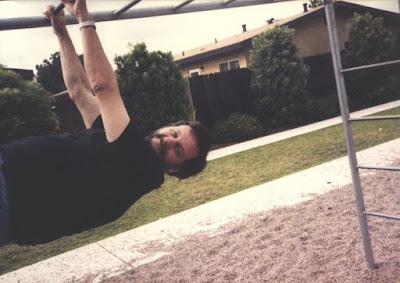 Haircut on the 21st. Around this time, I usually got my hair cut at the barbershop where family friend, the late, great Ken Driscoll worked. Shout out to Ken! Sort of like an unofficial godfather to me for much of my childhood. He was a good guy. Used to help organize ballgames for underprivileged Mexican youths and other generous stuff like that. A very positive personality though he dealt with a lot of painful issues and poor health. He passed away in the mid 90s and that was a major bummer. Rest in Peace, Ken.

Received whatever "MLB" was (another boxed card set, maybe? book?) on the 23rd. Then I acknowledged Cal Ripken, Jr's birthday on the 24th.. which seems funny to me because I don't recall Cal being among my top tier favorites growing up. Maybe this was around the time I pulled a rookie card of his from an old pack of 1982 Topps.. possibly my best pull ever. 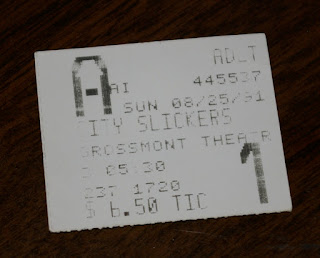 Winding down the month, we saw City Slickers in the theater on Sunday the 25th (the film originally opened June 7, 1991, so this was likely near the end of its theatrical run). I don't have any strong memories from the experience, so there must not've been any nudity in the movie. Then it was back to school on the 26th.

That'll wrap us up for this post. Thanks for reading and please share in the comments if you've got any thoughts regarding Dino or whatever else. 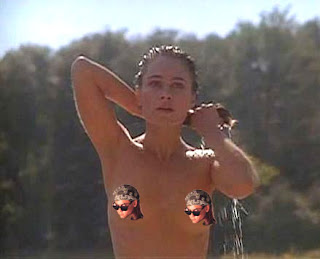