We've finally made it passed the Legends and into the main set. The main set is actually split up into three genres (Pop, R&B/Rap, and Rock) sorted alphabetically, with the occasional outlier making things weird... but we'll get to all that later.

Kicking off the pop section is the lovely Paula Abdul. Looks like the photographer had her dance around a bit to get an "action" shot with her hair bouncing around. I can picture the guy, "Ok Paula, now let's jog in place. Lift those knees! Beautiful!"
Paula has 6 total MusiCards: two more on deck right after this one, plus two more once we get to Series 2, and then one in the UK edition. Also worth noting that her cartoon collaborator MC Skat Kat has a couple cards himself in Series 2. 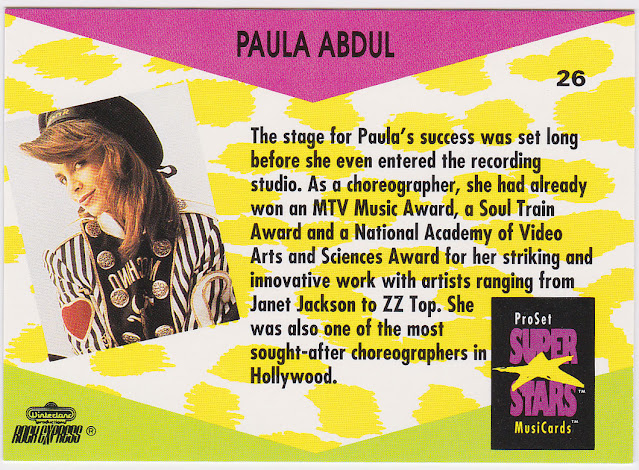 The back write-up covers her background as a successful choreographer. I remember that she was part of the Laker Girls before her singing career, but forgot she did all that other stuff too. Pretty impressive. Younger folks who weren't around for her time on top of the charts probably know her best these days as a judge on American Idol back when that show was a cultural phenomenon, and she's since gone on to judge on other singing/dancing TV shows.
It's not great quality, but this video taken at a live performance features Paula telling the story of how she became a Laker Girl. (It wouldn't let me embed it here.)
Pre-stardom Paula got some screen time in the "Nasty" video.
The Jacksons discovered her through her work on the court and her career quickly took off from there. The music videos she choreographed for Janet Jackson are "What Have You Done for Me Lately", "Nasty" (which netted her the MTV Video Music Award for Best Choreography), "When I Think of You", and "Control". Those were all from 1986, as was the one video she did with ZZ Top, "Velcro Fly". She was also behind the big keyboard scene in Big (1988). Even after she became a pop star, she stuck with it, such as choreographing Val Kilmer's moves when he played Jim Morrison performing in The Doors (1991). 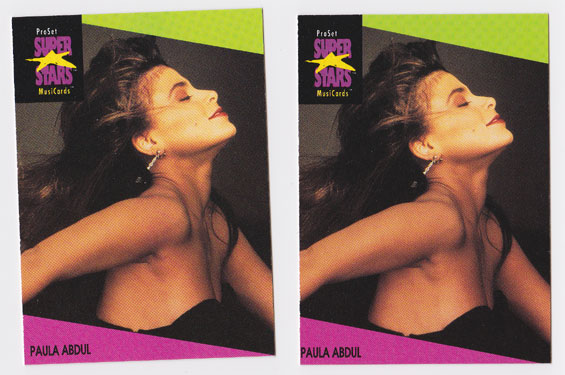 In putting this set together, I've come across a lot of MusiCards, and I try to keep an eye out among the dupes for any undiscovered variations or interesting printing flaws. I haven't found much, but one that was almost notable was a #26 that was slightly miscut. Notice how the "P" is all the way at the edge of the card. Again, not all that interesting unless you're really going through the set with a fine-tooth comb like I am.

As for Paula Abdul's music, I'll admit I was a fan as a kid back in the day. I owned 1988's Forever Your Girl on cassette and loved it. Even today, I consider her a "guilty pleasure" of mine and will give that album a play every so often.

We've still got 5 more Paula Abdul cards in the pipeline, so we can poke into her musical career more later. I'm going to keep this post short (no "Custom Corner" bonus artist today), but wanted to make sure I published something before September was over. One post per month is my bare minimum goal for this blog. Hopefully going forward I start getting through the set at a brisker pace.

My life was floating along pretty nicely back when this blog debuted a year ago (10/1/2019), but things took a turn for the worse shortly thereafter. My dog Annie got sick that month and had to be put down in early November, which really gutted me and my wife. Then just when things were getting back to normal for us, the whole covid-19 pandemic took hold of the planet and made things shitty for everyone. Figuring out how to do my job mostly from home took some work. Add to that US government bullshit, unrest over police racism, and Oregon wildfires uncomfortably close to my neighborhood, and it's been a stressful and depressing 2020. Plus we got a new puppy (Ruby) in July who's a mischievous stinker who needs a lot of attention. And we're in the process of buying our first house, with the big move on the horizon. So recreational projects like this MusiCards Blog get bumped to the backburner thanks to stuff like that, even if cranking out one of these posts isn't exactly a ton of work or super time-consuming, but I still gotta carve out some time and get in the right headspace for it.

Not that I think you few kind folks reading this care too much about the frequency of posts here, but as we hit the one-year mark at the blog, just wanted to defend the slow progress so far.

Big thanks for sticking with me! Hopefully year 2 of the blog covers more than 26 cards!