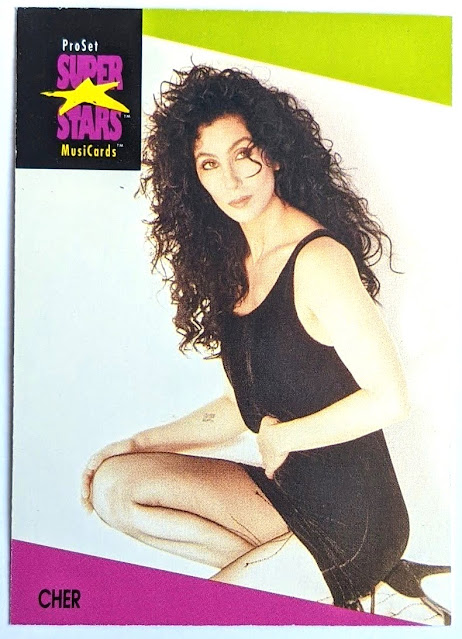 Here's Cher's second card in the 1991 MusiCards set, #39. It's her last appearance in the US version, but she's also got a couple in the UK set. Kind of an awkward photo of Cher taking a knee with a hand on her belly. Does she have a tummy-ache? Showing off how slim her waist is? Or just striking a variation on that old Napoleon pose? 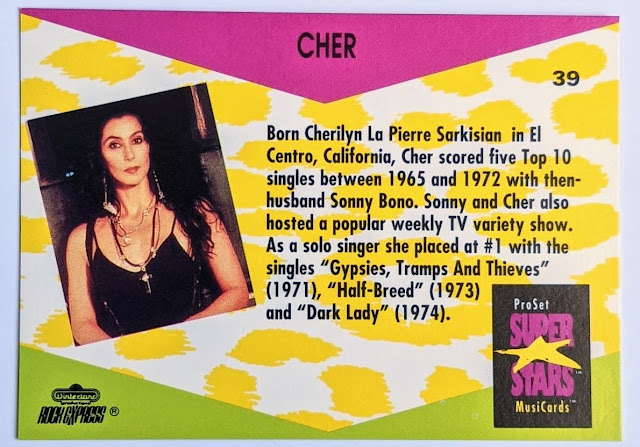 The back reveals her birth name and recaps her early career highlights. Actually, the birth name part isn't quite accurate, as she didn't pick up the "LaPierre" part until 1961 when her mother remarried. Note the extra space after Sarkisian.. wonder if that was copied/pasted in with an early word processor. LaPierre would have gone after Sarkisian, so maybe somebody moved it (erroneously) and forgot to clean up the extra space.
I didn't realize she was from El Centro, not all that far from my similarly-named hometown of El Cajon in East County San Diego. El Centro is about halfway to Arizona.

"Gypsies, Tramps and Thieves" was her first hit as a solo artist breaking away from Sonny Bono. I've been watching a thrown-together hour-long documentary that's streaming on Amazon Prime right now called Cher: Life in the Spotlight. I probably wouldn't go as far as recommending it-- It's just people talking about Cher plus some old clips; she wasn't involved personally-- but it was somewhat enlightening as to how she became who she is today.

She had always had wanted to be an actress, but fell into music and became known for cheesy comedy of her TV variety shows. Mask (1985) finally got her some respect in that field, receiving a Golden Globe Award nomination for her performance. In the film, she clashes with her son (who suffers from a disfiguring bone disorder) over his baseball cards, going as far as tearing up a 1974 Topps card of Ron Cey.

How cool/funny would it be if Ron Cey got some revenge and ripped up one of Cher's musicards on camera? LOL

Anyways, the pinnacle of Cher's acting career probably came a couple years later in 1987, winning the Oscar for Best Actress for Moonstruck. Gotta tip your cap to her, pulling herself up from a rough childhood with a desire to be famous to become a world-renowned singer and actress. 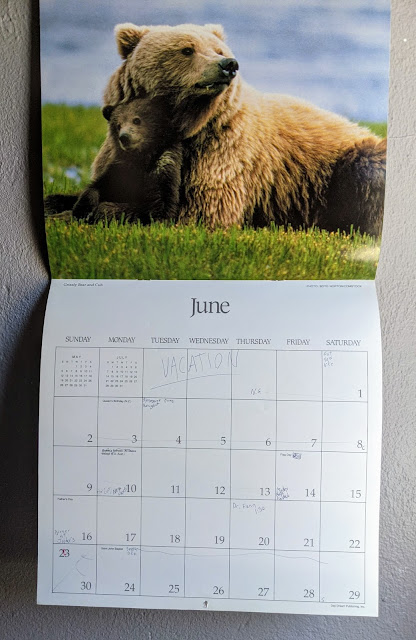 The old calendar I've managed to hang on to for 30 years. 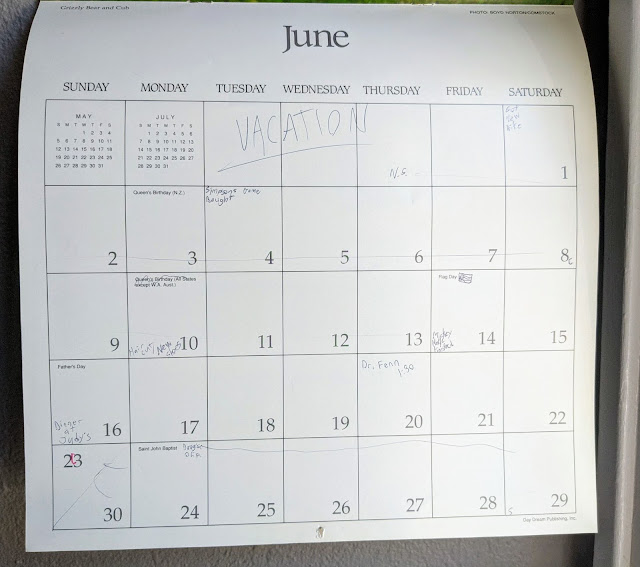 My comments here seem to translate to:
6/1 "Got new bike" (Follow-up to buying it on 5/30 [per last month's calendar].. must've taken a few days to get it in stock.)
6/4 "Simpsons game bought" (This must've been Bart vs. the Space Mutants [NES, released April 25, 1991], a game I have a love/hate relationship with. Fun but also very frustrating. Played through it again just a year or two ago, relying on Game Genie codes because otherwise it's way too hard. Hell, even with the cheat codes, it's a tough one, especially the last couple levels.)
6/10 "Hair cut / new shoes" (No recollection of these, sorry. lol)
6/14 "Mickey Magic (?) finished" (At first I was thinking this was in reference to beating the Nintendo game Adventures in the Magic Kingdom, but I had just noted I beat that game a couple weeks earlier on 5/31. Oh wait! I bet that actually says "Mickey Mantle finished" which is in reference to a Mickey Mantle book I read, My Favorite Summer 1956.. one of the few non-schoolwork books I read back in the day-- hardcover, no less. As young baseball fan, I enjoyed learning about a legend of the game. When I returned to the hobby as an adult, I scored myself a few vintage Mantle cards and eventually a certified autograph, which I'm sure would've blown my mind back then.) 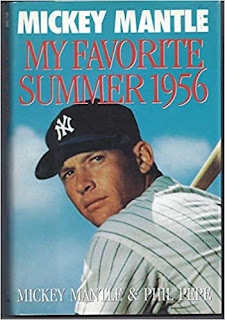 6/16 "Dinner at Judy's" (A family meal at my Aunt Judith's house on Sunday, probably for my grandfather's birthday that was coming up that week.)
6/20 "Dr. Fenn" (braces/orthodontist)
6/24 "Doug's off" (At first I thought this said "Drug's off" and I was like "Whaaa? Was I on drugs back then?", but pretty sure this references my best friend Doug being off school. Yeah, because I went to that weird private school for the first part of the year before we met back up at the same middle school for 8th grade later in the year.)

Ok, now as for the blog's gear shift, up to this point I've done a separate post for each card. But I've been averaging just a card or two per month, and at this rate I'll likely die of old age before I've covered the nearly 700 MusiCards I plan to blog about.

So, with your guys' permission, I think it'd be a good idea to start grouping multiples together. Not jumping around the checklist, but rather including consecutive cards of the same artist into one post. So I'd still be covering the set in order, just sometimes chunky style. For example, instead of two posts for Cher (the previous post and this post), I would probably have featured both cards in one post.

Coming up soon are 4 consecutive Debbie Gibson cards; and while I like Debbie Gibson fine, I probably don't have all that much to say about her. And Vanilla Ice has 15 total MusiCards (counting the Yo! MTV Raps ones), so what am I supposed to say in 15 separate posts about him?! Those are just a couple examples, but there are a lot of multiples in the set, and combining them will help us move along more swiftly.

But this is all moot for the next post, as it'll cover the only MusiCard that Taylor Dayne ever got. 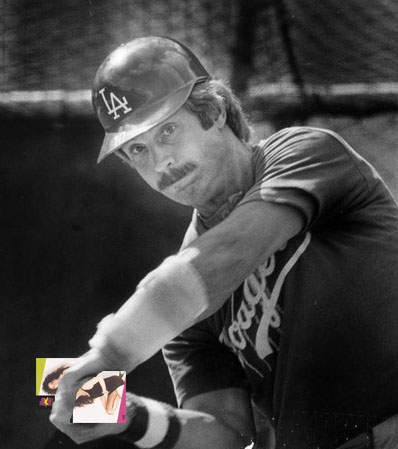