Ok, we're back! Neglected this blog for a few weeks, overshadowed by the covid-19 craziness we've all been dealing with since the previous post. But I'll try to get back on track. I promise this blog will never die until we reach the final card in the set or I'm physically unable to post for whatever reason (you know.. like death or significant mental impairment). But as long as I'm still kicking, this blog will keep inching forward, even if it takes us a freakin' decade or longer to get through the set! This I vow! LOL

Another reason that I was dragging my feet writing this post is I got to the end of the card images I had prepared, so that means the chore of scanning or photographing the next several cards in the set in preparation to post about them (Sure, I could find "stock" images online, but for whatever reason, it's important to me to use my own images with these MusiCards).

And another reason for my procrastination is it's hard to finalize those "desert island disc" lists (Best Of playlists) because sometimes I agonize over them more than I should. I know it's not a big deal, but I'm weird about it. I might try moving away from doing those lists since they're standing in the way of this blog moving along at a good pace.

But really, I'm looking forward to getting beyond the Legends subset that begins the set. Dealing with very popular bands means there's more history there to try to cover. And more notable songs to feature. More thoughts and memories of mine to ramble on about. So that makes the posts take longer to write. I'm anxious to get past the Legends and onto the pop acts of 1991.. especially lesser artists who were just a blip on the Billboard 200 radar and then disappeared forever. Bands I'm unfamiliar with. Bands where I'll struggle to have anything to write about. Those are the kind of posts I'm excited to research.. no offense to The Who and other greats of their ilk.

I'd say this card is a significant improvement over the previous card that featured a distant live shot of the band. Here we see the four fellows hunkered tightly together for a promo photoshoot, Pete and Keith looking at the camera, with John and Roger looking off distracted. 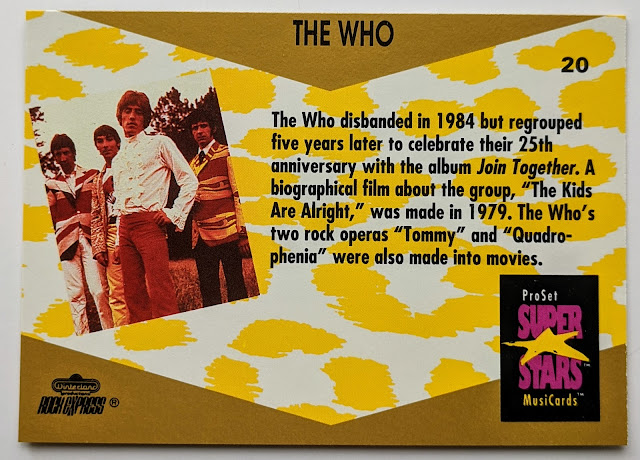 The back features another posed shot, this time with the guys dressed up a bit fancier.


"The Kids Are Alright" is a great song and I'm kicking myself for forgetting about it in the last post. (See what I mean about stressing over which songs I pick? haha) I don't think I've seen the 1979 doc with that title the card mentions, but I wouldn't mind catching it sometime. Honestly, I don't think I've watched Tommy or Quadrophenia either. Maybe someday. 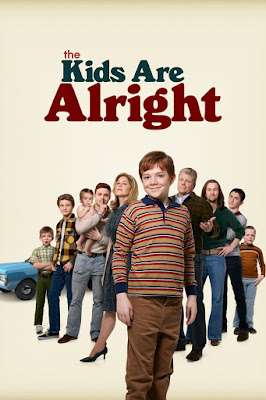 Something I have watched! The short-lived TV show from a year or two ago called The Kids Are Alright was a solid sitcom that took place in the 70s. (And it featured baseball cards sometimes!) Bummer it got cancelled. But that doesn't really have anything to do with The Who other than the title. 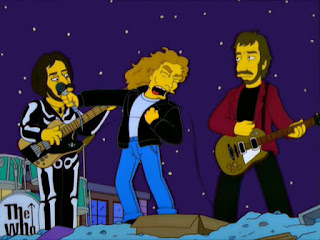 As far as The Who themselves on TV, well the first thing that pops in my mind is their guest appearance on The Simpsons. That was way back in 2000 ("A Tale of Two Springfields"). 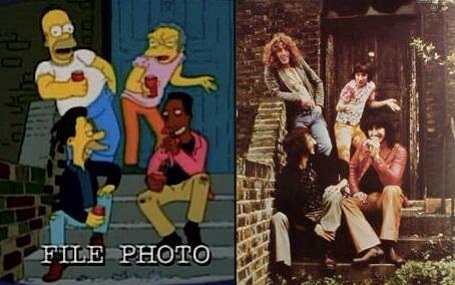 The Simpsons also snuck in a subtle Who reference in a different episode with this "file photo" from Springfield that's clearly an homage to the photo on the back cover of the album Meaty Beaty Big And Bouncy.

I remember my mom owned Meaty Beaty Big And Bouncy on cassette when I was a kid, and it was always very awkward whenever either of us said the title, as you can imagine. But yeah, that's a great Who best-of, originally issued in 1971 on vinyl (and 1980 on cassette).

I guess that's enough to say about The Who for now, but they'll be back on the blog with a pair of Historic Concerts cards coming up later in the set. 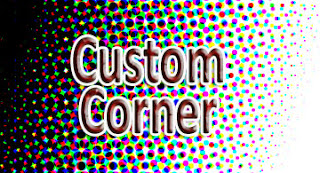 Hmmm... um... I can't really think of a band. Well, I was planning on a big Pearl Jam write-up (they were heavily influenced by The Who), but that would be a whole can of worms and I want to keep this short so I can hurry up and publish this post. So I'll save Pearl Jam for another day.

Tell you what, I'm just going to show off this custom set I made recently for Dimebox Nick's dad. A few years back, we worked out a deal where I whipped up some custom cards of a few of his favorite musicians in exchange for some decent baseball cards. And then he came up with a new list of names for "Series 2". He gives me free reign in choosing designs to use, though he digs 70s oddballs most of all. Here's how they turned out: 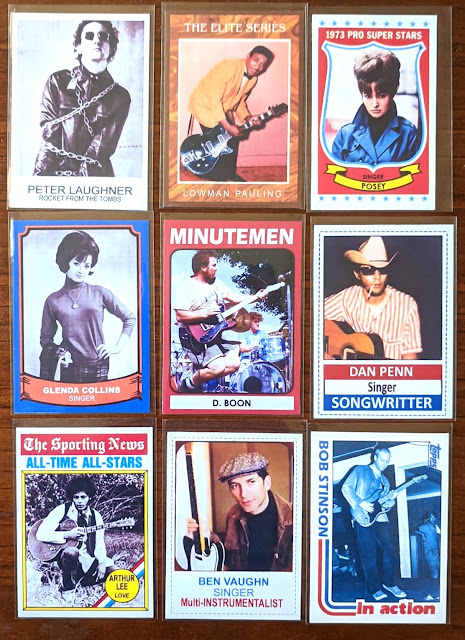 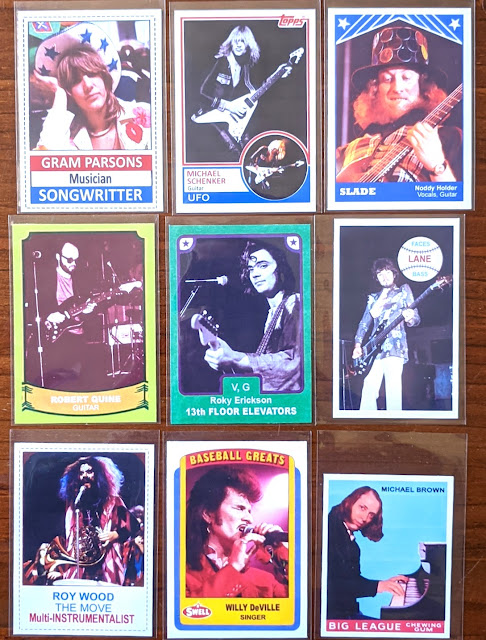 I wasn't familiar with many of these folks (best know the Minutemen and Replacements out of the lot), but it was cool learning about them all while putting the cards together (they all have backs, too).

Speaking of hooking people up with printed-out customs, I'm working on a limited special offer where readers can score a custom of their choice from me. Like a "MusiCards Blog Supporter Pack" thing where you throw a little "donation" to the blog and then I send you a custom card or two and other cool stuff like a mix CD and an exclusive "print edition" blogpost. I think it'll be fun!.. Stay tuned for this offer to show up in a future post once I get it all sorted out.

Next up on the blog, we kick off a stretch of Led Zeppelin cards. I'm hoping to bust thru them quickly, since as I mentioned, I'm anxious to get out of the Legends section and into the meat of the MusiCards set. See you soon!
at April 19, 2020 5 comments: