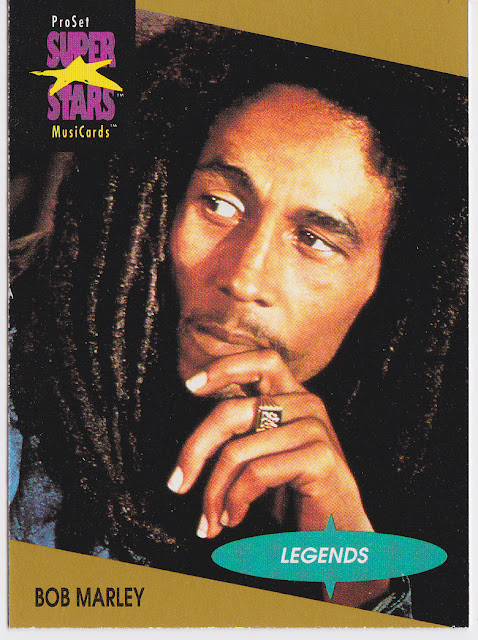 Number 16 in the 1991 MusiCards set is reggae legend Bob Marley. 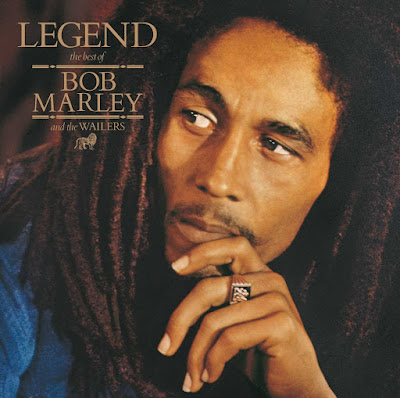 This same source photo also appears on the cover for his iconic posthumous greatest hits album Legend. Note the synergy of the Legends subset using an album cover of Legend on a card. Originally released in 1984, it's the best-selling reggae album of all-time.

As for the card, this is Bob's only card in the set, though his son Ziggy also has a card, coming up in a little while at #70. I think it's the first MusiCard we've come to that uses an album cover as the picture, though a card for The Doors came close.

And the same photograph was used on a popular poster that adorned the walls of countless college dorm rooms in the late 80s and early 90s. Maybe still today? 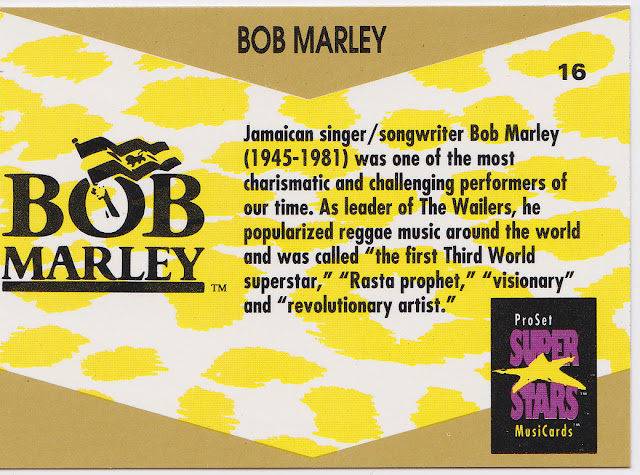 Dig that logo. As the TM would indicate, it's an actual logo that the Bob Marley foundation uses. Variations of it can be found on stickers, patches, and the like.

Marley, as you likely know, was an extremely popular musician from Jamacha who helped popularize the genre of reggae music worldwide. He was known for his rastafarian spirituality and outspoken support for the legalization of marijuana. His incredible life was cut short, sadly passing away from cancer in 1981 at the age of 36.


As for me, I love Bob Marley. I got a used CD of Legend as a teenager and listened to it a bunch.

Quick personal anecdote.. My mom took a vacation to Jamacha in the mid 70s before I was born, and among the highlights of her trip was discovering an impressive local musician. She brought home a vinyl copy of Catch a Fire and tried to introduce her friends to her discovery, only to realize that just about everybody in the US already knew about Bob Marley. lol

I'm not going to list out a "desert island disc" for him here, but if I did it would basically just be Legend, a damn near perfect collection of songs, though I'd probably swap out the edited live version of "No Woman No Cry" that fades out a couple minutes early for the full-length live version. Additional tracks I'd tack on would include "Lively Up Yourself", "Trenchtown Rock" (live), and "Iron Lion Zion"


I can't say I'm a reggae aficionado or anything (unlike my friend DJ Short Change), though I dig Bob Marley and a handful of other stuff, such as some tracks on the The Harder They Come soundtrack. I also enjoy the likes of The Congos, Lee "Scratch" Perry, and good ol' UB40. I can also get into some stuff from other folks out of the Bob Marley crew such as Bunny Wailer, Damian Marley, Ziggy Marley, and Peter Tosh.

That's it for today. How about you.. Are you into reggae at all? Any recommendations?
at January 28, 2020 4 comments: 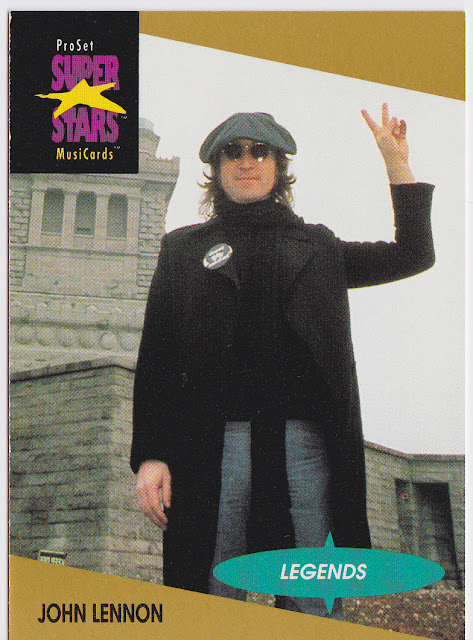 After a month hiatus (sorry 'bout that), our journey through the 1991 MusiCards set picks back up with John Lennon at card #15. Here he is flashing a peace sign in front of an old brick building. Can't quite read what the pin on his lapel says, but I'll assume it reflects an anti-war sentiment.

Hey, it's the first card in the set that features a variation!! 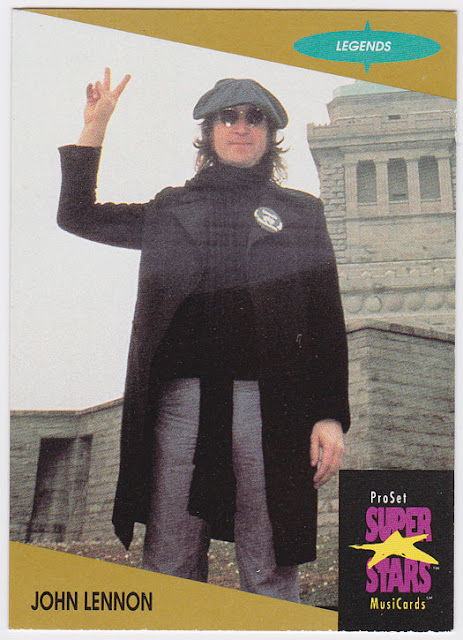 The variation flips the photo and moves the Super Stars logo box down to the lower right from the top left. The teal "Legend" bubble moves from near the bottom of the photo to up in the top border. My copy has some surface wear (scuff across his chest), so I'd like to upgrade it at some point. (Please let me know if you've got one to trade.)

According to TCDB hearsay (no image provided to corroborate), there's a third variation where John's left hand is giving the peace sign (as in the 1st card) and the logo is in the lower right (as in the 2nd card), but again there's no physical evidence of this and some have questioned if it actually exists. It probably doesn't. Hey, if you've got one of those, please let me know, send me a pic, and I'll make the update here. Otherwise, we'll assume that's just bullshit and there are really only two versions of this card. (No other MusiCard has more than 2 known variations.) 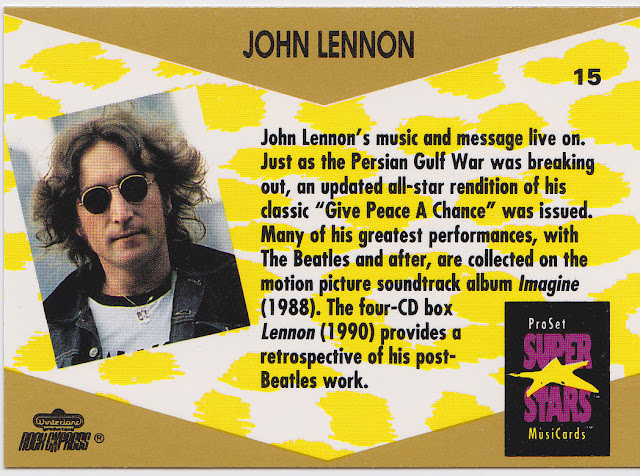 I'm a big Beatles fan, yet I had never heard of the 1988 Imagine soundtrack (not to be confused with his 1971 album by that name) nor the 1990 Lennon box set. But there have been no shortage of compilations of his music since this card came out, with remasters and rarities, which have surely built on and surpassed those two collections.


Here's the video for the 1991 update of "Give Peace A Chance" referenced in the second sentence on the back of the card. This version was credited to Peace Choir (spearheaded by Yoko Ono and Lenny Kravitz) and was originally released February 1, 1991. Lots of big names in there. I still remember when this premiered on MTV. Wasn't quite as big of a deal as say the similar all-star charity effort of "We Are The World", but I think it still had a strong positive impact.

Funny enough, this is the only true Beatles-related card in the entire main (US) MusiCards set. The UK edition has a Beatles card, however, plus a Julian Lennon card.. but that's it. I've already made a George Harrison custom, and will likely eventually whip up separate cards for Paul and Ringo.

I don't think I could pick a favorite between John and Paul.. they've both got a ton of songs that I love. From a personality standpoint, Paul would probably be more fun to hang out with, as John had a reputation of being a bit of a miserable asshole much of the time. But damn it if he didn't come up with some of music's all-time greatest songs during his tragically too short life.

I was too young to be affected by his murder, so by the time I "discovered" the Beatles (and non-children's music in general) around the mid 80s, he was already long gone. Such a huge bummer, though. I'd like to think there's an alternate universe somewhere with an elderly John Lennon still cranking out a solid album every few years, like Paul.

My main introduction to Lennon's solo work was when my mom bought the 1989 reissue of The John Lennon Collection, a greatest hits CD, during a brief Columbia House music club stint where she added several CDs to our household music collection. "Instant Karma!" and "Imagine" were my favorite songs then, and I suppose the same is still true today, though I've since dug deeper into his post-Beatles work and have found several more tunes I really like.

If I were to round up my favorite John Lennon solo tracks onto one CD/playlist, it'd probably look something like this:


I think my favorite cover of a John Lennon song is the Flaming Lips' chaotic rendition of "Nobody Told Me" from the mid 90s. I remember when it first came out on a tribute album called Working Class Hero that my buddy got an advanced promo CD of. Crazy to think that when that came out, it was closer to when Lennon died (15 years passed) than the length of time between when that tribute CD came out and today (25 years). Just yet another "make you feel old" moment.


I was planning to forgo a "custom corner" bonus section of this post, mainly because I'm ashamed/frustrated I've taken so long between posts and didn't want to drag it out any further. But screw it, I've already brought up the Flaming Lips, a band heavily influenced by John Lennon, so let's go ahead and whip them up a custom.

The Flaming Lips broke through to the mainstream with their wacky hit "She Don't Use Jelly" in late 1993, though they had been around since the early 80s, and are still at it today despite not having another U.S. Billboard Hot 100 hit since. Coming out of OKC, they are a wonderfully weird band who've done stuff like release a song that is 24 hours long, as well as release an EP "on a flash drive embedded in a bubblegum-flavored fetus made of gummy bear material."

I'm a big Lips fan, especially their output from the early 90s through the early 00s. I've seen them live once-- 11/19/2000 at 4th & B in San Diego-- and they always go all-out putting on a spectacle. I remember lots of balloons and confetti. Fake blood also.

It'll be tough culling my favorite songs of theirs down to just 20 or so tracks, but I'll give it a shot...

[...gavin goes and tries to narrow down his top 20 favorite Lips songs...]

Ouch, ok-- no, I'm not. Too tough! They've got a streak of 7 consecutive albums that I love and think are nearly perfect from start to finish:

Those albums are all classics in my book. So I think I'll try coming up with a list of my favorite Lips songs that aren't included on any of those 7 albums.

Flaming Lips - "The Switch that Turns Off the Universe"

Yeah, that'd work for me as a companion 8th cd to go along with the 7 albums previously mentioned.


Any feelings on John Lennon to share? Favorite songs of his? Or how about the Flaming Lips? Let me know in the comments if you wanna.
at January 19, 2020 5 comments: