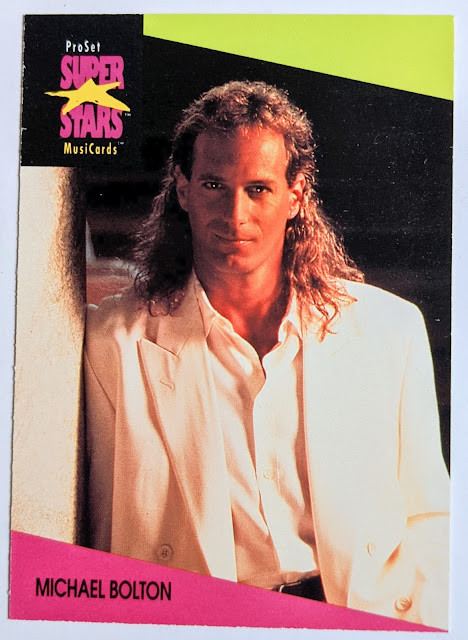 Our journey through the 1991 Pro Set MusiCards SuperStars set takes us next to #34 Michael Bolton. He's giving us his sultry stare as we admire that bold hair choice. Mid-age women really went bonkers for that look back then, I guess. Haha 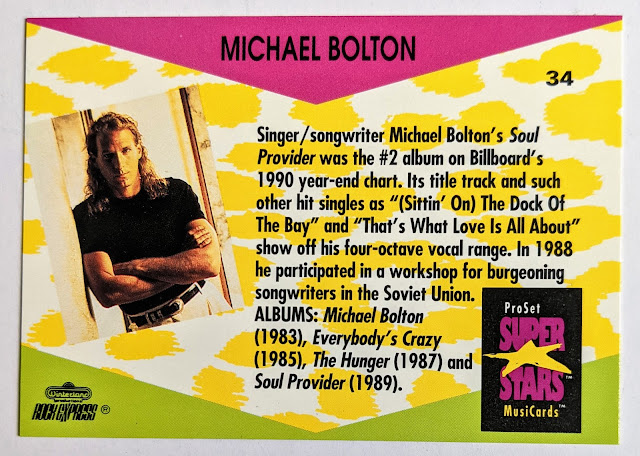 I'll admit that there was a brief moment when I was a kid that I regarded his "How Can We Be Lovers (If We Can't Be Friends)" as a pretty cool song. But that was fleeting and he soon became a target for everyone to rag on.

But hey, the guy can sing and to his credit he laughed it off all the way to the bank. Only Janet Jackson's Rhythm Nation 1814 was a bigger album in 1990 per Billboard.

It's funny that he started out as a hard rock singer before transitioning into the power crooning he's best known for.

"Maybe it's the Power of Love" is the most popular track from his early rock band Blackjack. 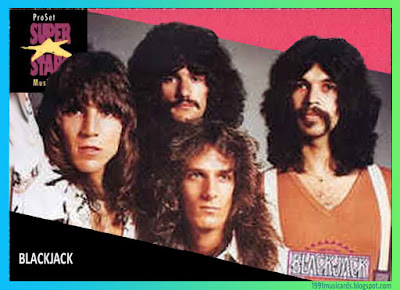 Sure, let's whip up a custom for them. Checking out their stuff for the first time now while drafting this post... Yeah, these guys seem to have put out some solid late 70s/ early 80s pop rock. I can dig it. You could picture them opening for the likes of Boston and Aerosmith back then. But I guess they just never got their big break and Michael eventually focused on catering to the ladies with soulful ballads.

That seemed to work out well for him. "Bolton's achievements include selling more than 75 million records, recording eight top 10 albums and two number-one singles on the Billboard charts, as well as winning six American Music Awards and two Grammy Awards." (wikipedia)

He still cranks out an album every few years. Folks in my demographic probably remember him best these days thanks to the film Office Space (where an unhappy character is stuck with also being named Michael Bolton) and the Lonely Island, with whom he guested on a funny Pirates of the Caribbean song that was featured on Saturday Night Live. He also released an amusing special on Netflix in 2017 titled Michael Bolton's Big, Sexy Valentine's Day Special.

Cool that he doesn't take himself too seriously.

Today's his 68th birthday, so I'm rushing to get this post finished in time to publish today. You know, my little cap-tip to the guy. lol

He's also got a card in the UK edition of the MusiCards set, so assuming this blog keeps motoring along, we'll eventually revisit him again on here in a few years.

Can any of you muster up any feelings one way or the other to share about Michael Bolton? If so, go ahead and leave a comment below.

Thanks for reading. Mr. Robert Barisford Brown is next up. 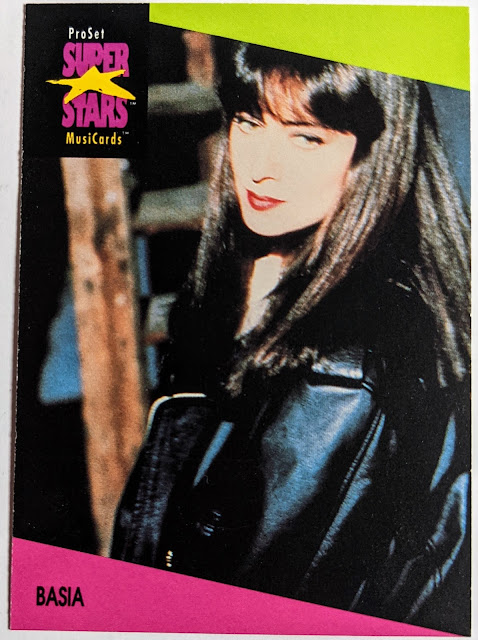 Basia is card #33 in the 1991 MusiCards set. I gotta admit I'm not very familiar with her, though I think I've heard a song of hers pop up on Spotify mixes. Nice enough photo of the lady here, though a little blurry. 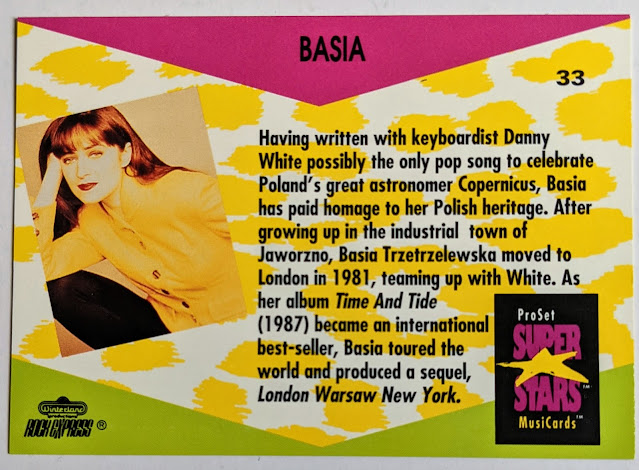 The write-up on the back does a good job presenting an overview of the artist's career (something not all of these cards do very well!). The back photo provides a better-focused look at her, reminding me a little of a young Gillian Anderson of X Files fame.
Basia - "Time and Tide"
Ok, this is a great song. I seem to recall hearing it back in the 80s when my mom would play the easy listening station in the car. It's a triumphant 80s pop song with lasting appeal, if you ask me.

Checking out some of her other popular songs now, I'm enjoying them fine, but nothing really grabs me quite as much as the "Time & Tide" track. A lot of her stuff has a nice chill Latin jazz vibe that I wasn't expecting. Really like the Jobim cover of "Waters of March".

Continuing a quick bio from where the back of the card left off, Basia's third album was 1994's The Sweetest Illusion, and she kept busy for the rest of the decade. She was inactive for a few years, but eventually returned with her 4th album, It's That Girl Again (2009). More recently, her latest release was popular in certain circles, with Butterflies (2018) hitting #4 on the US Jazz Albums chart and reaching the Top 20 in her homeland of Poland.

Feels good to learn a bit more about this singer who I was only vaguely familiar with before this. (More info on her wikipedia entry, if you want it.)

How about you readers? Were you like me saying "who?" at this card, or am I in the minority by not being all that familiar with Basia? 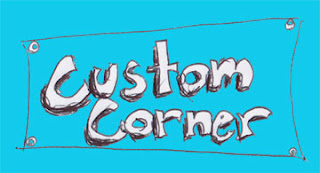 There's no shortage of bad news these days, but I'm hurting from word that Miles Seaton from the band Akron/Family died the other day. They've got like 4 or 5 songs I love and several more that I like a lot. Would have liked to have seen them live at some point, but unfortunately never did. 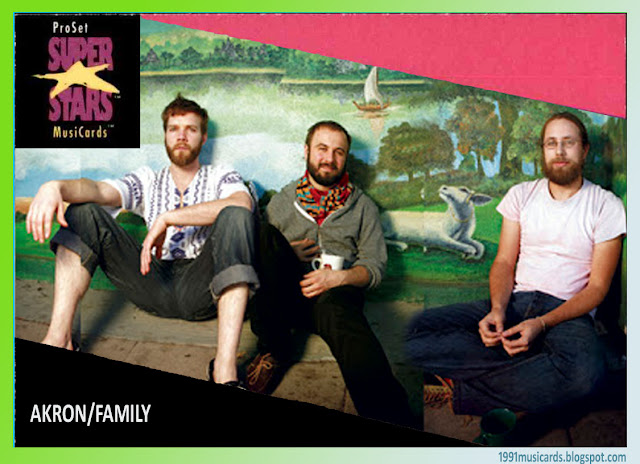 So I figured I'd give a little tribute with a custom.
Akron/Family - "Running, Returning"

"Running, Returning" was the first song I heard from them, included on an mp3 mixtape made by an online buddy back around the mid aughts. Kinda blew my mind back then, ain't gonna lie. Just really lost myself in that song.

Their 2007 album Love Is Simple is probably my favorite record of theirs. "Ed Is A Portal", "Don't Be Afraid, You're Already Dead", and the middle part of "There's So Many Colors" are songs that I would consider "must hear". I listen to that triforce of songs late at night and feel like I'm at some kind of trippy bonfire campout sing-along jamboree that I'm not entirely convinced isn't a cult but I'm willing to go along with it if just for one night.

"Ed Is A Portal"/"Don't Be Afraid, You're Already Dead"/"There's So Many Colors"

Man, a real fun band. Sort of like a Dead-inspired jamband vibe in an indie folk rock setting with this cool group of guys, sometimes also venturing into the realms of Arcade Fire or Animal Collective. Sometimes they might get a bit too improv/jammy for my taste (I'm generally only a casual fan of jam bands.. like, I've never seen Phish live or anything along those lines), but they catch some pure magic here and there.

I should listen to more of their stuff and try to check out their respective solo work too. Akron/Family didn't really have a traditional frontman, but Miles Seaton seemed to handle most of the lead vocals.

Rest in Peace, Miles Cooper Seaton. Not sure the cause of death, but regardless, 41 is too young. And he was a great dude by all accounts. Heartbreaking.

Well, to not end on a down note (and to give you something else to read while you hopefully continue listening to those Akron/Family videos), here's the next old calendar installment for this year.

Time for another look at what my life was like 30 years ago. 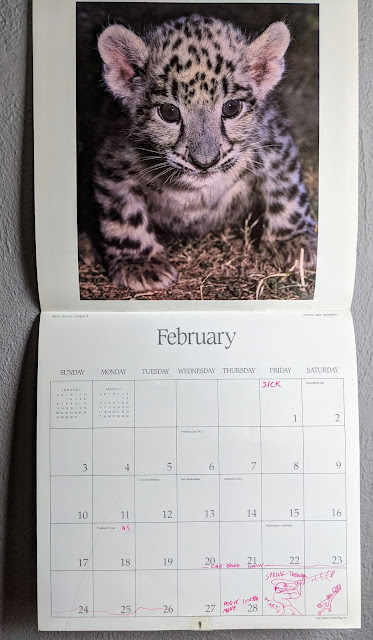 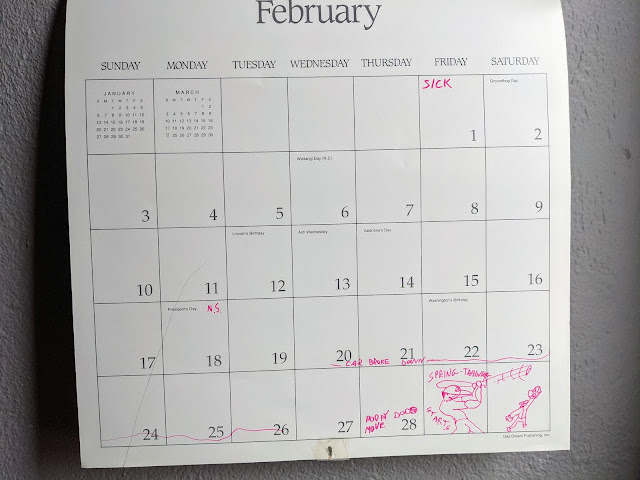 Looks like my February '91 wasn't all that notable other than family vehicle maintenance issues and some excitement at the end of the month.

Big life moment alert: "Poopy Doos move" -- The story there is that when we moved into the condo where I lived for most of my life, our neighbors beside us were a really nasty family of a husky couple and their two bratty daughters. They seemed to hate us from the very beginning, like they blamed us for the fact that the previous tenants (who they were close with) moved out, which is totally unfair. Our families really just did not get along at all. There were a few dumb incidents in my memory that still upset me to think about all these years later. Anyhow, I had nicknamed that awful family "The Poopy Doos", which while not very classy, fit them perfectly. (Funny, I don't even remember any of their real names now.) My friends and I would always refer to them as the Poopy Doos, and eventually even my mom started calling them that too.. which I thought was hilariously awesome because she tended to take the high road, being the reasonable human being that she is. So yes, it was a big day when they finally moved away! Honestly, I think I might have to open a bottle of champagne on the anniversary to celebrate 30 years of those sacks of crap being out of my life, lol!

But if I wrote a book about all the bad neighbors I've had over the years, they would only be chapter 2 of a thick paperback. I'm extremely thankful that I now live in a house and don't have to share a wall with anyone anymore. And our neighbors in the area all seem cool, happy to report. 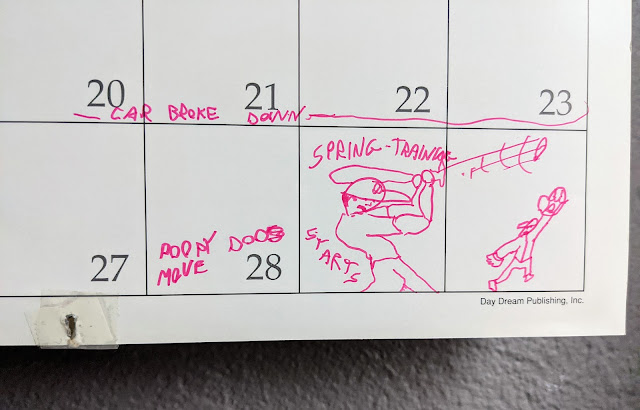 The "Spring training starts" drawing goes to show how I was really into baseball at the time. And I think my doodle shows that my artistic talents haven't improved much since I was 13. Haha, I really do wish I was a better artist, as I'd love to be one of those awesome sports art guys out there, but I just didn't have it in me. Still like to doodle, though!

That'll do it for this post. Please let me know in the comments if you've got any thoughts to share regarding Basia, Akron/Family, and/or anything else I've rambled about here.