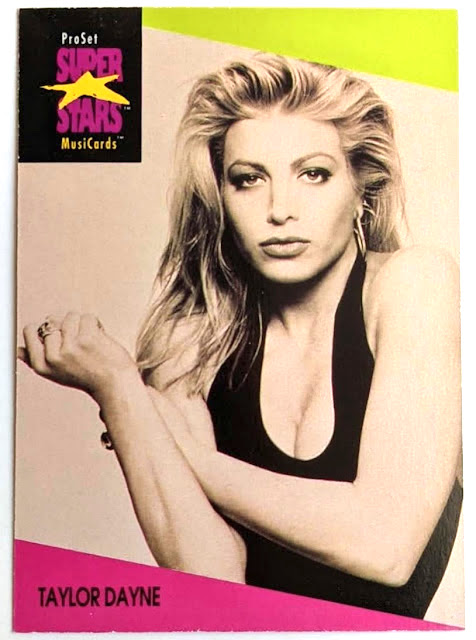 This is 40. Number 40 in the 1991 Pro Set MusiCards set, that is. Taylor Dayne is looking good here in a sepia shot that fills the photo area of the design nicely. 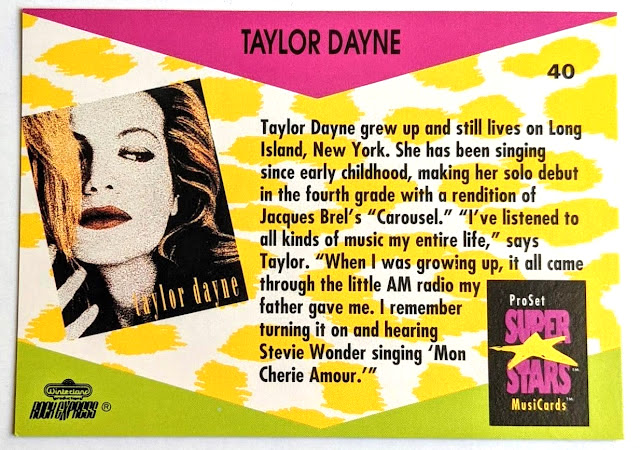 Flipping the card over reveals some background on Taylor's origins as a performer, name-checking Jacques Brel ("Carousel") and Stevie Wonder ("Mon Cherie Amour"). That's a cool looking picture on the back, one of the more "artsy" images we've seen in the set so far.
Taylor Dayne - "Tell It to My Heart"
These days Taylor Dayne is remembered with "Every Beat of My Heart" as her popular song, but I've always known her for 2 songs, with the other being "Tell It to My Heart". Ha, wait-- reverse that! Looks like "Tell It to My Heart" is the bigger song. It's far-and-away her top track according to Spotify, with over 124 million listens. Compare that to "With Every Beat of My Heart", which doesn't even make her top 5 list on Spotify, with only around 2 million listens. I remember hearing both a ton back when I listened to pop radio circa '87-91 and it's kinda blowing my mind that one is a much more popular song than the other today. 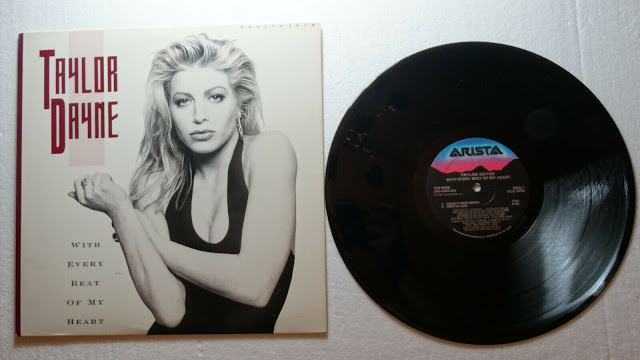 Oh hey, turns out the photo on the front of her MusiCard was originally used as the cover for the "With Every Beat of my Heart" single. (pic from eBay)
Taylor Dayne - "With Every Beat of My Heart"
Apart from those 2 songs-- both guilty pleasures of mine in the 80s pop area of my music collection-- I don't know much about her, so I'll go skim her Wikipedia entry.
Taylor's first two albums, Tell It to My Heart (1988) and Can't Fight Fate (1989), both went double platinum. 1993's Soul Dancing found a tougher reception in the post-Nevermind era, but still went to #2 in Australia. Naked Without You followed with little fanfare in 1998, and her latest LP to-date is 2008's Satisfied, though she's put out a few singles since. She still performs occasionally and competed on season 4 of The Masked Singer in 2020.
I'm listening to more of her stuff while working on this post... "Love Will Lead You Back" was her only #1 single in the US. Oh yeah, now I remember this ballad. It's just meh for me, though it does transport me back to riding in the car with my mom and the adult contemporary station on that played the crap out of this stuff when I was a kid. "I'll Always Love You" is another one of these from Taylor-- very familiar to me though I haven't heard it in decades. I like this one better. I appreciate a good sax solo. "Heart of Stone" is another good song I had forgotten about.
Please let me know if you've got any feelings either way to share about Taylor Dayne in the comments below. 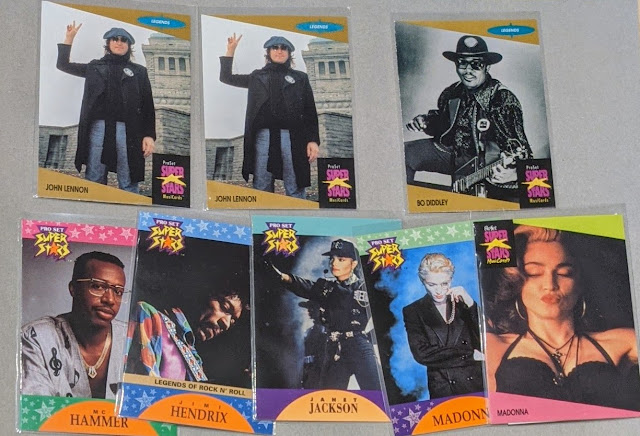 My big COMC shipment included a few MusiCards for my attempt at a "master set" of the things. I needed to upgrade my reversed Lennon, but accidentally bought 2 of them, lol. So now I have 3 counting the scuffed one. Bo Diddley (1st card of Series 2) was another condition upgrade for me. The bottom row are all promos. I've now completed all the promo cards ...well, all that feature artists, not just text/ads. Some of these I scored on eBay in nice lots in the time between when I bought them on COMC and when I finally received them. So if anybody out there is working on a MusiCards master set, I've got several of the (relatively) rare promo cards available for trade, including the Madonna error, which is probably the most desirable of the promo cards to land, though I don't think I'd go as far as to throw around the "holy grail" term. (The holy grail of MusiCards has got to be the hologram, right?)
I also sorted my base MusiCards recently. Verified that I've got complete sets of Series 1, Series 2, the UK Edition, plus both series of the Yo! MTV Raps MusiCards. Always good to confirm.
I might put together a second set of Series 1 Super Stars with my dupes (and have plenty of triples too), and if I did that I'd be tempted to go after another set of Series 2, but that one's tougher. Maybe it's sadistic of me, but I'd kinda like to try building Series 2 from packs. Might have to keep an eye out for deals on a sealed box or two. I need a Series 2 box for my master set anyways, if'n I decide to include more than just cards. (I have hung onto empty boxes of Series 1 and the UK Edition, plus I've got a sealed box of Series 1 and an open but seemingly-full box of Yo! Series 2.) And I've got an ulterior motive that I'll get into another day.
But as for my master set of cards, I'm down to just dumb stuff that mostly got thrown away back then:
NNO Promo Pack Header
NNO Advert - Pro Set MusiCards Collector Files binder ad (from UK Edition)
NNO Borden's Promo Pack Header (Fairy God Dude poster offer)
NNO Diamond Comic Distributors promo card
NNO 10¢ Coupon - Pink Spots (from Series 2)
If I was going to the National this year, it's crap like this I'd be hoping to find. lol
Not that they keep me up at night, but the completist in me would love to track them down and be crowned the undisputed king musicard dork.
Anyways, now onto the thing where we take a quick look at my old calendar from 1991. 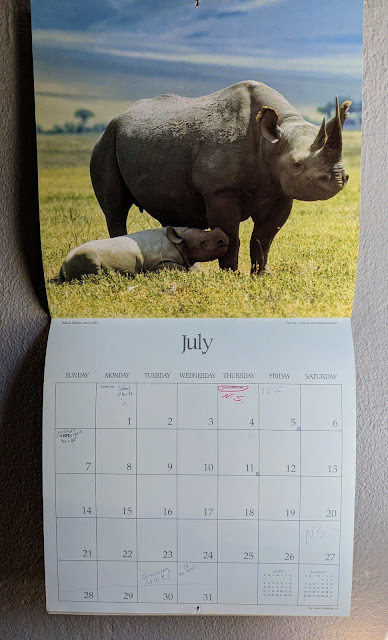 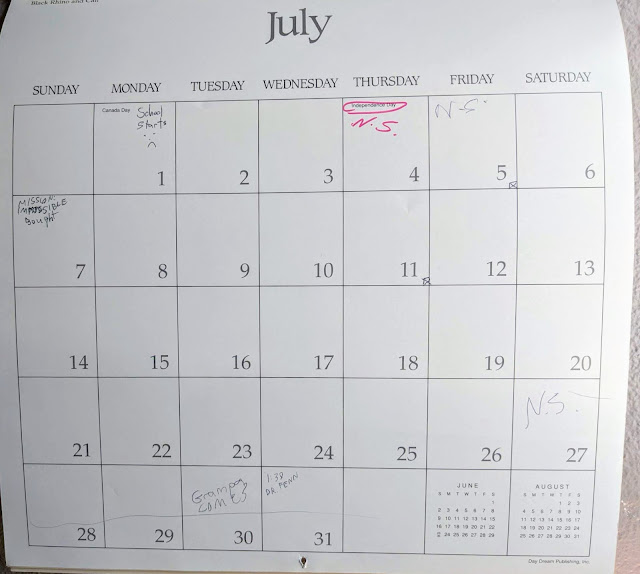 Not a very eventful July for me 30 years ago. Back to school on the 1st, sadly. Looks like I bought a new video game on the 7th.. no doubt during a Sunday evening Target trip with my mom. I only vaguely remember the Mission: Impossible NES game today, but maybe I'll play it via emulation one of these days for old times' sake. The meaning behind the little boxes on the 5th and 11th is a mystery now lost to time. Looks like my grandfather visited at the end of the month. He and my grandmother moved out from Florida to be near us and my aunt in San Diego not too long after this. Perhaps he was in town checking out retirement homes.

Then an orthodontist appointment on the 31st and that's it. For what it's worth, I peeked ahead and August has more action. That's coming up in the next post.. featuring the MusiCard of a forgotten singer who shares a name with a cartoon dinosaur dog. So stay tuned.