#54 Information Society (+ getting a MusiCards wantlist up) 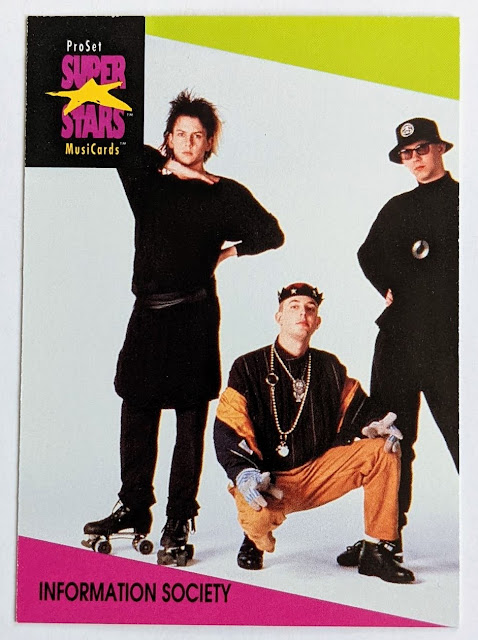 Information Society are #54 in the 1991 MusiCards set. The trio each have something quirky going on in this photoshoot, with one guy on roller-skates, one guy in gardening gloves and a Jughead hat, and the third guy in unusual headwear as well.
This card makes for a compelling argument that Pro Set really would have been better off being looser with placement of the logo box. It'd be a nicer looking card if the photo was centered better and with the logo in the lower right corner instead. But no, series 1 cards all have the box in the upper left-- with the exception of a handful of variations that were actually only available in series 2 packs-- while the cards in the series 2 checklist all have the logo box in the lower right. The UK edition also sticks the box in the lower right without exception. Sure would have made more sense to just decide which corner to place it based on what worked best with the photo at hand, but apparently that thought didn't jive with the Pro Set employee(s) who were making those calls during the design phase of the product, so we get some awkwardly framed cards like this, the lone Information Society entry in the MusiCard universe. I would whip up a custom variation if I could find this photo online, but I wasn't able to track it down. 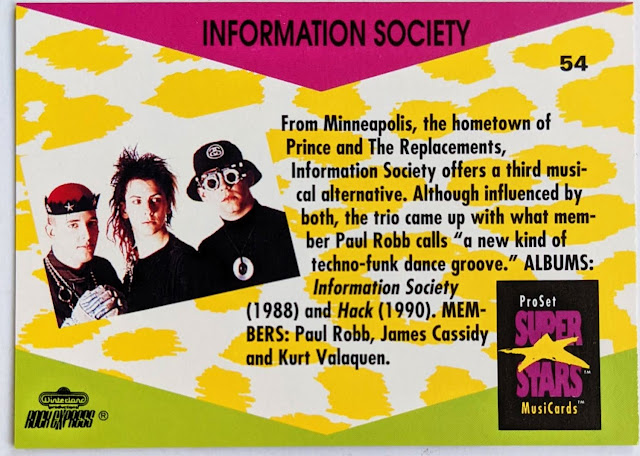 I did find the back picture, however, from the same photoshoot. Now the third guy has added kooky glasses to his ensemble. 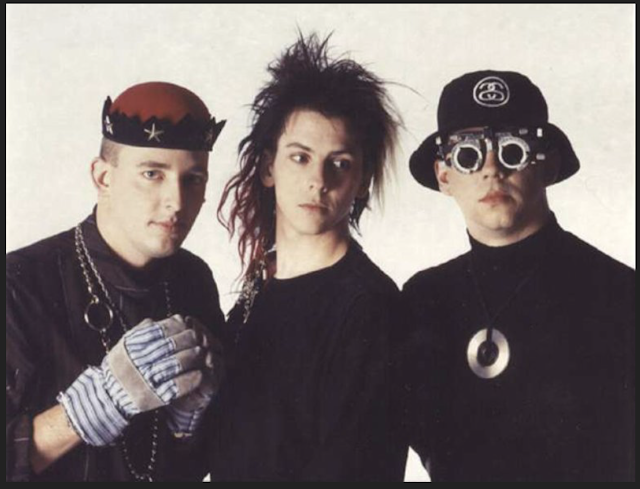 I think of Information Society as a one-hit wonder, with their "Pure Energy" getting played on the radio a ton when I was a kid. But I rarely, if ever, saw the video on MTV, or recall any other song from them, and just don't ever hear anyone mention them anymore, so much so that I had been wondering if perhaps it was more of a regional hit in the San Diego market. But nope, turns out they built up a decent following. Wikipedia is telling me they were active from 1982–1997 and then 2006–present, with these 3 guys still at it decades later.
Information Society - "What's on Your Mind (Pure Energy)"
It's a pretty cool song, though the video is laughably dated with late 80s ridiculousness. They had a woman in the band for a while, but she left sometime between this video and the aforementioned photoshoot. Fun fact: Apparently they were able to clear the Star Trek sample because Leonard Nimoy's son was a fan of the band. While "Pure Energy" is the only track of theirs I could name off the top of my head going into this post, according to Spotify they've got another song that's also very popular called "Repetition":
Information Society - "Repetition"

"Repetition" has 11 million plays (compared to 14 million for "Pure Energy"). "Repetition" doesn't ring a bell nor really do anything for me (and yes, I'm repeating "Repetition" a bunch as some dumb meta joke), but while checking out their other popular tracks, there was one song that perked me up in a "wow, I probably haven't heard this song in 30 years!" way...

Honestly I don't know if I'd go as far as to say I liked "Walking Away" back in the day, but I definitely remember it for its catchy, eye-rolling chorus. I remember joking with my buddies poking fun at it. Like, after turning off a Nintendo game, I might deadpan, "I am walking away from, walking away from, games that suck such ass," or something dumb like that.

Are you readers familiar with Information Society? ... like, beyond the "Pure Energy" song? Let me know in the comments, if you'd be so kind.

Getting a MusiCards wantlist up

I found some time over the past couple weeks to sort my duplicate 1991 MusiCards with the intention of putting together a 2nd set (Series 1 + 2 + UK). Got pretty close, but ended up short a few.. many of which are the common, garden-variety Series 1 cards, thankfully pulling the vast majority of tougher Series 2 cards from a retail box of the stuff. (I didn't luck into pulling a hologram insert, though.. which would be a dream of mine, but not enough to rip through dozens of boxes looking for one).

I figure having a second set would be nice to have around, not just as something productive to do with my many dupes, but also because occasionally when I pull out my set to get card images for the blog, I'll notice a printing flaw or condition issue hurting the card's appearance. So it'd be nice to know I've got a complete backup I could turn to in situations such as that.

Instead of listing my needs in this post, I went ahead and made a separate page for my MusiCards wantlist that I can link on the sidebar and update going forward. If you've got some MusiCards available, please take a look and get in touch if you've got any I need and wanna swing a little trade.

Also.. Anybody working on a MusiCards set or want to start? I've got lots of triples available from Series 1, Series 2, and the UK Edition that I'd be happy to thin out in trades without expecting much in return. Just let me know! 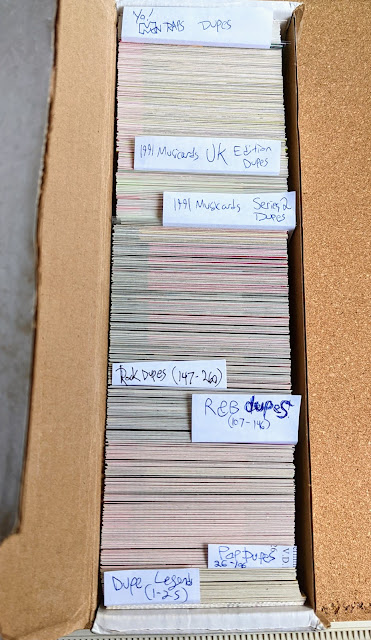