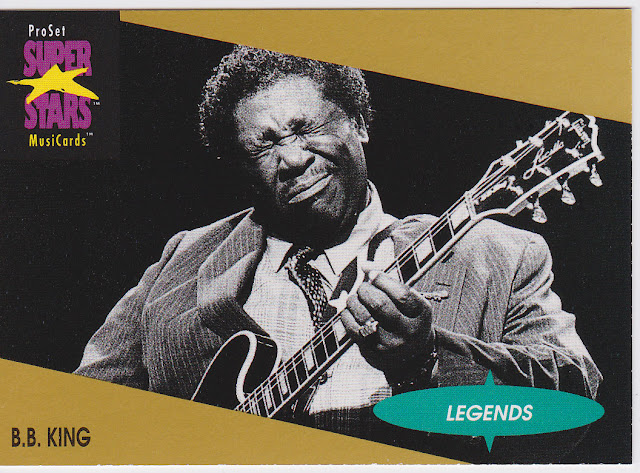 Blues great B.B. King checks in at #14 on the checklist for 1991 Pro Set MusiCards Super Stars. That's the type of image that pops in your head when you think of B.B. King, so can't really complain about that, though (as with many of the cards) the picture might be a little cramped by the design. 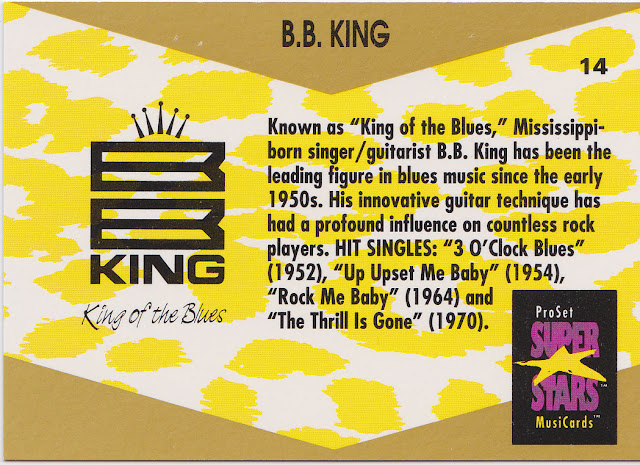 Hey, it's the first instance in the set where the back picture isn't a secondary photo but rather a logo/wordmark. There will be a decent number of these as we make our way through the set. Running a Google image search for "b.b. king logo" doesn't show this one in the results that I could find, so I'm not sure if it's an official thing or just something worked up by the team at Pro Set. Regardless, it's pretty cool looking.

In addition to this card, Mr. King pops up again at card #253 in the Historic Concerts subset.

I've never been a huge fan of the blues. I don't hate it, but it's too "samey" for me to listen to too much of it before tiring of the predictable chord changes and whatnot. But that said, I've got nothing but respect for the legendary B.B. King. "The Thrill Is Gone" is the only specific song of his that I could name off the top of my head, however. I recently also listened to his record with Eric Clapton (which I checked out back when we were covering Clapton near the start of this blog) called Riding with the King which is really good.

B.B. kept frequently performing well into old age, passing away in 2015 at age 89. I remember hearing that his shows in his final years were often pretty bad, but I suppose you need to adjust your expectations accordingly when you're going to see a performance from a guy in his late 80s.

In the previous post, I listed a few new/recent songs I've been digging in 2019. Now I'm going to share some older songs that've been in heavy rotation for me this past year. 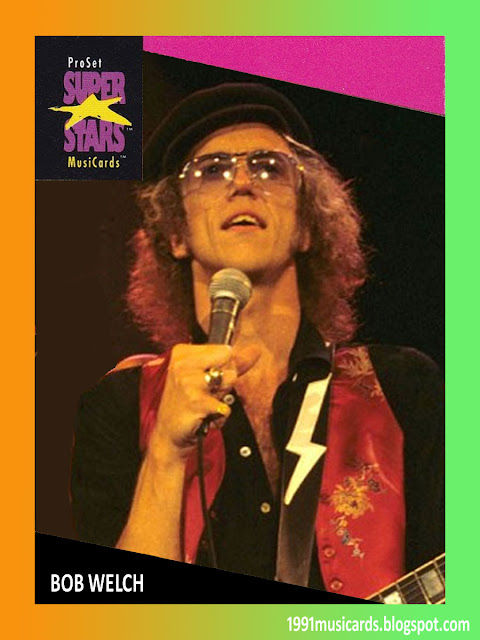 Bob Welch - Sentimental Lady
A few months ago, the name Bob Welch was known to me only as the pitcher who won the AL Cy in 1990 with 27 wins for Oakland. But turns out there was a popular musician who shared that name. This Bob Welch (Robert Lawrence Welch Jr.) was a member of Fleetwood Mac for a while in the early 70s and helped guide them towards the breakout success they'd achieve later in the decade. He also had some solo hits, with "Sentimental Lady" being the one that I've been into lately. I'm kinda embarrassed to admit that I was introduced to the song thanks to it being prominently featured in a recent episode of Family Guy. I heard it on the show and was like, wow, how have I not heard this song before? I was obsessed with it for weeks, one day listening to it probably over 20 times in one day, no joke! There are a couple different versions of the song, a 1972 Fleetwood Mac version and a shorter 1977 solo version. My preference is the latter version with the more-prominent Christine McVie "all I need is you" backing vocals. Facing serious medical issues in 2012, Bob took his fate into his own hands at age 66 rather than push through a few more years living in debilitating pain, which is sad but can't say I blame him. This gorgeous song of his lives on.


Jay Ferguson - Thunder Island
Dr. Hook - Sharing The Night Together
Like with "Sentimental Lady" these are a couple more songs that fit under the umbrella that is known today as "yacht rock". I know some folks don't like the term (sorry, Night Owl), but it's basically just a shorter way of saying "soft rock from the mid 70s through mid 80s". It's a genre I'm a big fan of, recalling the "easy listening" hits on the radio when I was a kid riding in the car with my mom. "Thunder Island" is another track I have Family Guy to thank for introducing me to. Not sure who on their writing staff is making it their mission to bring attention to these lesser-known smooth gems of the past, but hats off to them! "Sharing The Night Together" is a song I was familiar with, but hadn't heard in a long time until it was featured in the recent Breaking Bad movie El Camino. It's a great song and a peaceful scene in an otherwise tense film.


Phil Collins - Colours
Genesis - Misunderstanding
I had a bit of a Phil Collins/Genesis revival this year, though I suppose I never really stopped listening to him since the 80s. Surprisingly, neither Phil Collins nor Genesis has a card in the MusiCards set despite being big names at the time, so I'll have to be sure to feature each in upcoming Custom Corners. I had ...But Seriously (1989) on cassette back in the day and liked most of the songs a lot. The track that's stuck with me the most is "Colours" which is actually a couple different songs in one, with a mellow keyboard intro giving way to an anti-apartheid rock song with big horns and big drums. With the total length clocking in at nearly 9 minutes, it didn't get much radio play and was never much of a hit, but it's an all-time favorite of mine. "Misunderstanding" is an older Genesis song (1980) that had evaded me until earlier this year when noted cardblog reader (and Collins/Genesis fan) Mr. Haverkamp asked if I could make a custom card for him using images from the song's music video. It's a neat a song. Reached #1 in Canada, but not as big of a hit in the US.


B-52s - Follow Your Bliss
Teenage Fanclub - Is This Music?
Here's a pair of instrumentals from a couple bands that were active at the time of the MusiCards set (though neither got a card) and are still around today. "Follow Your Bliss" is a dreamy track that closes 1989's Cosmic Thing, a pretty darn good record that these days is mostly just remembered for "Love Shack". And another album-ending instrumental, "Is This Music?" came out in 1991 on Teenage Fanclub's Bandwagonesque record. It's crammed with distorted guitars buzzing away delightfully. I've got Spotify to thank for putting these songs on my radar this year by including them in "mix for you" playlists (Don't get me wrong; Spotify recommends me a lot of shit, but once in a while they hit a home run.)


Speed Round:
The Wrens - This Boy Is Exhausted - Catchy indie rock. I need to check out more from them.
Florence + the Machine - Dog Days Are Over - According to iTunes, my most-listened-to track ever.
Cymbals Eat Guitars - Jackson - I LOVE THIS SONG.
Deerhunter - Desire Lines - Another song I will sometimes listen to on repeat over and over.
Beck - Dreams / Beck  - Colors - That Beck album from 2015 was really good.
Kamasi Washington - Clair de Lune - I like to listen to this as an intro before listening to Dark Side of the Moon. (It's a whole thing I do once a month or so.. yes, weed is involved.. I'll probably talk about this more in a future post.)


And so... Those are some of my favorite songs I've listened to a bunch in 2019 that originally came out at least a few years prior. Good stuff; Check 'em out!

Next up on the blog is John Lennon.. which I'm going to try to post on Christmas Day to bring a little "Happy Xmas" to the blog, but we'll see if I'm able to pull that off. Don't have a whole lot of time for drafting posts this time of year.

Any thoughts on B.B. King you'd like to share, or any songs that you've had on heavy rotation in 2019? Sound off in the comments! Thanks for reading.
at December 20, 2019

Email ThisBlogThis!Share to TwitterShare to FacebookShare to Pinterest
Labels: B.B. King, Legends, my fav songs of the year