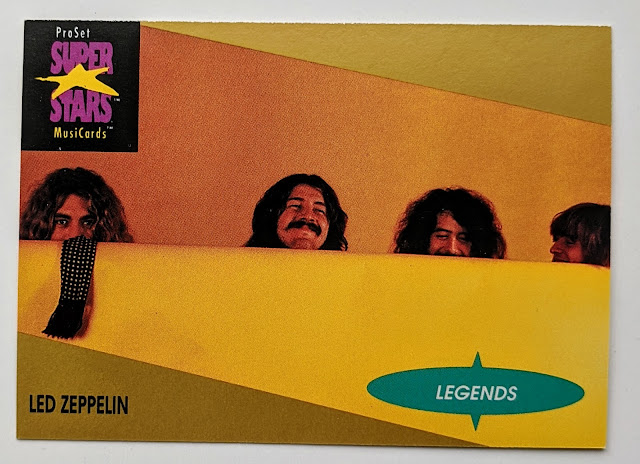 Here's probably the quirkiest photo we've seen so far, as we arrive at #21 in the 1991 Pro Set MusiCards set. John Bonham is playfully poking his smiling face above the yellow barrier, with the rest of Led Zeppelin being partially obscured. Works well with the design in a "modern art" type of way (step back and look at it.. It's pleasing, right?). If this was the Beach Boys, that'd be a big yellow surfboard, but Zeppelin don't surf, so who knows.. just a wall, I guess. 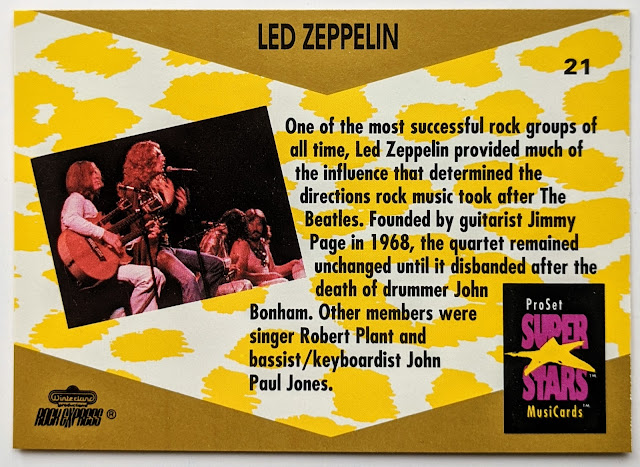 The back features a live photo.. Looks like an acoustic performance.. back before "MTV Unplugged" made that a trendy thing to do. Zep always ahead of the game!

Led Zeppelin has a total of 7 MusiCards by my count. This one kicks off 5 consecutive Legends cards, then they've got a Historic Concerts card later on in the set (#258), plus a promo card. Like with the previous band in the checklist, The Who, funny that these legendary Brit rockers don't have a card in the UK edition of the set. Gotta wonder what was going on in the Pro Set meetings when they were deciding which bands to feature. Licensing red tape played a part, I'm sure, but we're left with some head-scratching questions.

Oh, and Jimmy Page has already had a pair of solo cards, too! That brings the Led camp count up to 9 MusiCards. That might seem like a lot until you realize Madonna has a whopping 15 MusiCards. Geesh!
Led Zeppelin - Moby Dick (live drum solo)
Since John Bonham is the star of the featured card, I figure I'll spotlight him for this particular post.

I'm not going to go too deep here in these days of Wikipedia (Bonham's wiki), but the short version is John Henry Bonham was born May 31, 1948 in England. He never had a formal drum lesson, but started pounding away at an early age and along the way befriended Robert Plant, eventually joining him in the young band Led Zeppelin.
Bonham used big-ass drum sticks ("trees", he called them), and his heavy hitting is apparent on several of Zep's hits. I'll save listing off my favorite Zeppelin songs for one of the many future posts they've got in the pipeline, but there are plenty of good ones.
Led Zeppelin - "When The Levee Breaks"
As far as heavy-hitting hits of theirs, figured I'd go with "When The Levee Breaks". John really lays it down hard on that one. (And if you already started playing the Moby Dick clip above, that's fine.. just play this one on top of it.. it will add a unique touch to the rock!)
Unfortunately, John liked to not only hit the drums hard, but also party hard. And one fateful night in September of 1980 he partied a little too hard and passed away. The rest of the band were devastated by the loss and Led Zeppelin was no more after that (not counting a few half-hearted partial reunions over the years.. such as Live Aid in 1985, with both Phil Collins and Tony Thompson filling in on drums).

John left behind his wife Pat and their two children, Zoë and Jason. I was thinking I'd feature Jason Bonham, a distinguished drummer in his own right, in the Custom Corner section of this post.. but hold on, his 90s band Bonham does have a real MusiCard coming up at #153. LOL, oh well, looks like I've got to find another band for the custom.
CUSTOM CORNER
Yeah, I don't think I'll pick another band for this post, but instead here are a few John Bonham customs for ya!