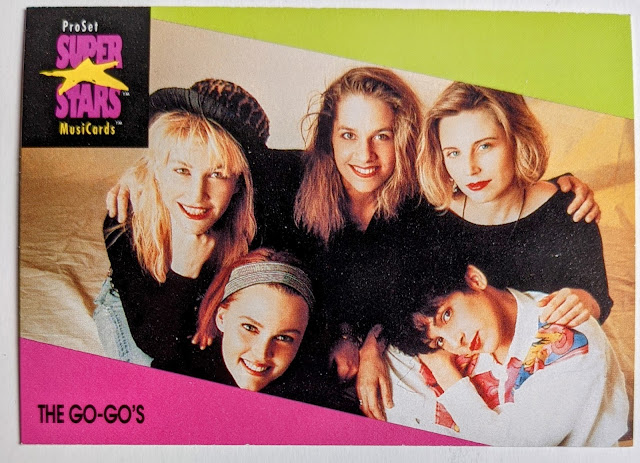 Card #47 in the 1991 MusiCards set features the Go-Go's. Nice huddled-together group shot with some big smiles. It's their only card in the set, though you may recall lead singer Belinda Carlisle also had a pair of solo cards back at #36 and 37. 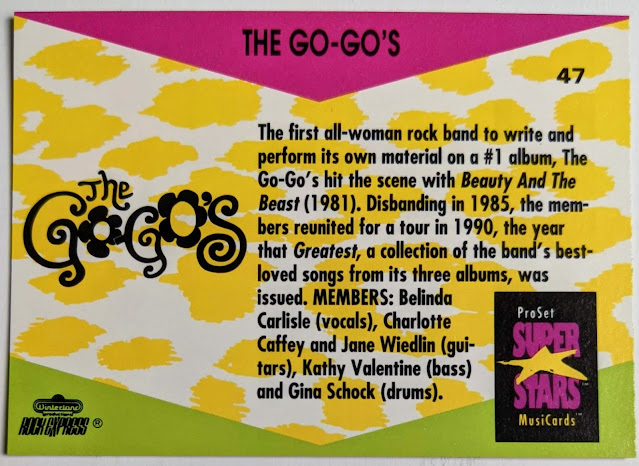 The back features a stylized wordmark rather than a photo along with the write-up.

The Go-Go's had pretty much already had their heyday by the time I was really getting into music as a kid, but their hits "Our Lips Are Sealed", "We Got the Beat", and "Vacation" were unavoidable, then and still today. In fact, I think I liked them more back in the 90s; at this point I'm kind of sick of those three songs, honestly. I've just heard them so much in my life, lol! And I don't think I could name another Go-Go's song off the top of my head.

But I poked around on Spotify in the interest of this post, listening to a dozen more songs of theirs trying to check out some deeper cuts, and while the songs were fine, I didn't find anything I felt compelled to add to my library. But still, the Go-Go's are A-OK in my book.

Looks like they still regroup for a tour every so often, so that's cool. In fact, they've got a tour kicking off later this year.

I've always thought Jane Wiedlin was especially badass. She did a little acting, but never quite popped as much as she probably could've/should've.

On the subject of popular 80s rock bands comprised by women, I'm surprised The Bangles never got a MusiCard. I'll have to spotlight them in a future Custom Corner. (That segment of mine has kinda been paused this year due to technical difficulties, but it should be returning to the blog in 2022. In the meantime, here's the bonus feature that's been filling in...) 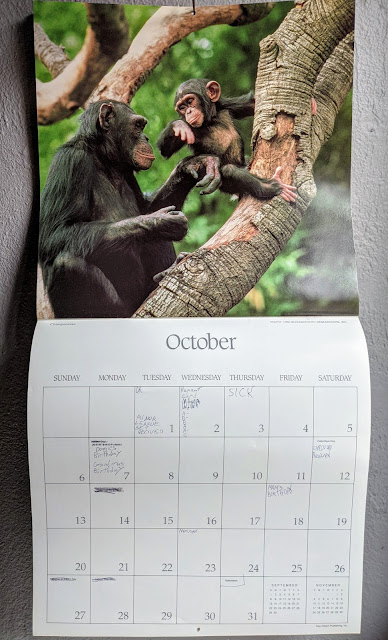 Chimpanzees rule the roost in October 1991. 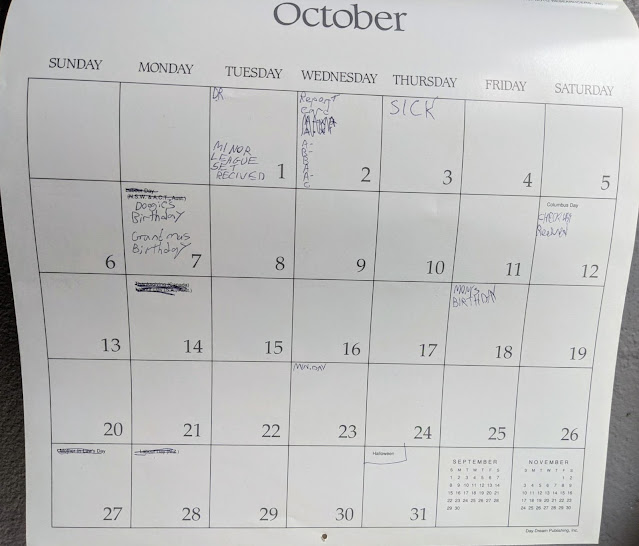 Not a very exciting month for middle school me. The novelty of these old calendar pages of mine has kinda worn off, but dang it, I've come this far, I want to close out the year! Just a couple more after this one. Don't worry, there will be no more old calendar pages in 2022!

So looks like October '91 featured some birthdays to go along with the Halloweentime later in the month. You also get a look at my report card grades, which I'd say are representative of my entire academic career. That's pretty good when you consider how many "sick" days we've seen on this calendar over these past few months. Goes to show you I've always been a slacker. Not a dummy, but not driven enough to ever really make something of himself. And I'm ok with that.

I believe the minor league set received on the 1st must've been 1991 Classic Best, which as I mentioned in a recent Baseball Card Breakdown post, is the only full-length set from my childhood collection that survived "the great possessions purge" as I prepared to move out-of-state years back. But I'm not sure what the checklist received on the 12th was. I wanna say it was maybe a big checklist for the 1990 Pro-Cards minor league cards. I was really into those for a few months back then.

Ok, I'd better hurry and get this published so I can keep up my quota of at least one post per month here. Next month will be Hall & Oates.. oh yeah!

Any of you readers big Go-Go's fans? Any lesser-known favorite songs of theirs to recommend?