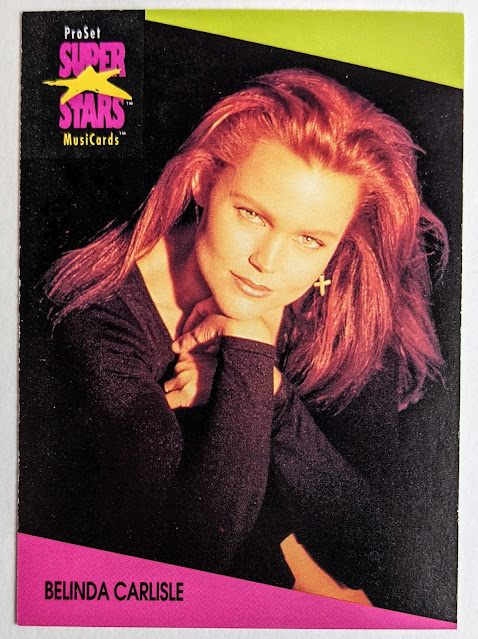 Belinda Carlisle makes her first appearance on the blog with card #36 in the 1991 Pro Set MusiCards set. She has another card right after this one, then her band The Go-Go's have a card ten spaces after that, plus she's got a card in the UK edition. 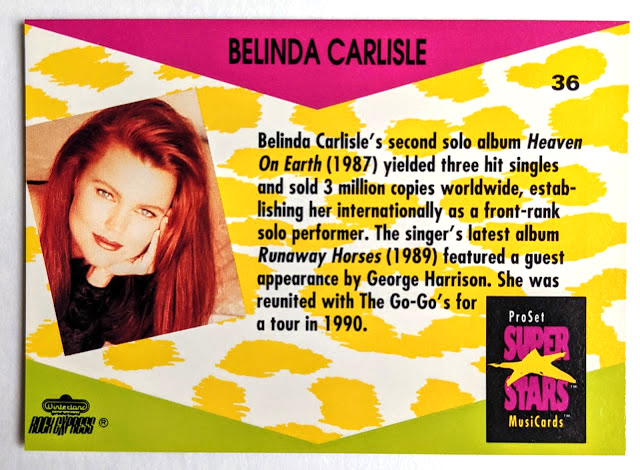 The back photo is pretty similar to the front, but now the background is brighter and the hand under her chin is touching her cheek as opposed to "the thinker" from the front.

"Front-rank" is a term you don't hear too often.

Prior to reading this cardback, hadn't known about the George Harrison collaboration. That's cool. Looking it up, the quiet Beatle appears on 2 songs: slide guitar solo on "Leave a Light On" and 12-string guitar and 6-string bass on "Deep Deep Ocean".

"Leave a Light On" stands as Belinda's last track to reach the US Top 20 (#11), following earlier hit singles "Mad About You" (#3), "Heaven Is a Place on Earth" (#1), "I Get Weak" (#2), and "Circle in the Sand" (#7). While her glory days as a "front-rank solo performer" didn't really continue into the 90s, she's kept busy over the years, both solo and occasionally reconvening with her bandmates in the Go-Go's.

I haven't really dug deeply into Belinda's catalog, but as a sucker for cheesy 80s pop, I love those aforementioned hit singles. And like most straight males who grew up in the 80s, I've always had a bit of a crush on her, the baby-faced cutie.

I think I'll try to check out some more Belinda Carlisle tracks between now and the next post, hoping to discover a hidden gem or two I didn't know about. Any of you readers fans of hers? What are your favorites?

Time to jump back three decades to see what I was up to as a middle school kid in 1991. 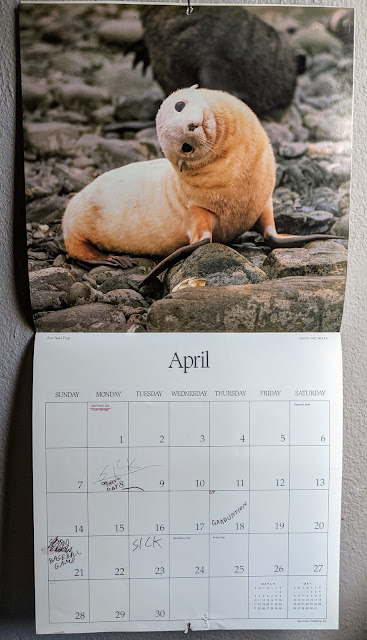 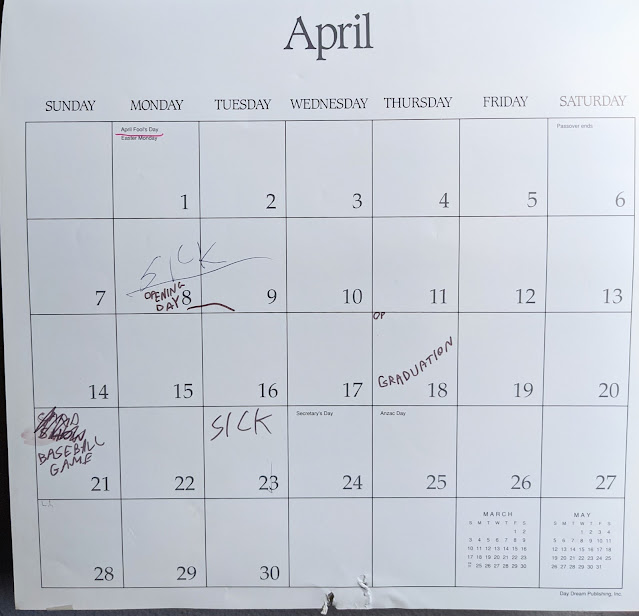 Looks like I played hooky to celebrate Opening Day '91.. probably watched any televised games I could find. Graduation seems a little early, noted there on the 18th. Oh yeah, I think this was the year I accidentally went to a weird private school. Then on the 21st, "card show" has been scribbled out, and looks like I went to a baseball game instead. I can't find a ticket stub and don't remember anything about it, but this was likely a Padres game at Jack Murphy Stadium, which looking it up, checks out as the last day of a homestand. Not a great outcome for San Diego, as according to the box score, Ramon Martinez tossed a shutout for the Dodgers. At least I got to see Tony Gwynn get a couple hits; and Darryl Strawberry went deep for LA.
Hold the phone. Belinda Carlisle dated Mike Marshall of the Dodgers in the early 80s. Ha! That ties the post together just fine.

Ok, I'll call it good here and be back with the other Belinda Carlisle card soon.