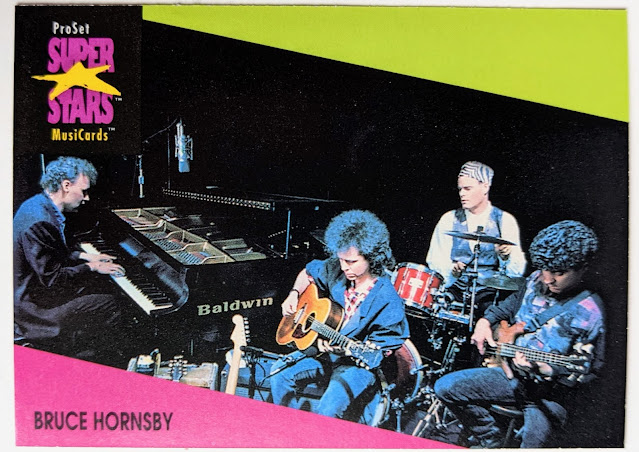 Hey everybody, 2022 finds us up to number 51 in the 1991 MusiCards set with Bruce Hornsby. Fine live shot here with Bruce at the Baldwin and The Range tucked in to his right. Seems a little cramped; is this an edited shot or are they really that huddled together? 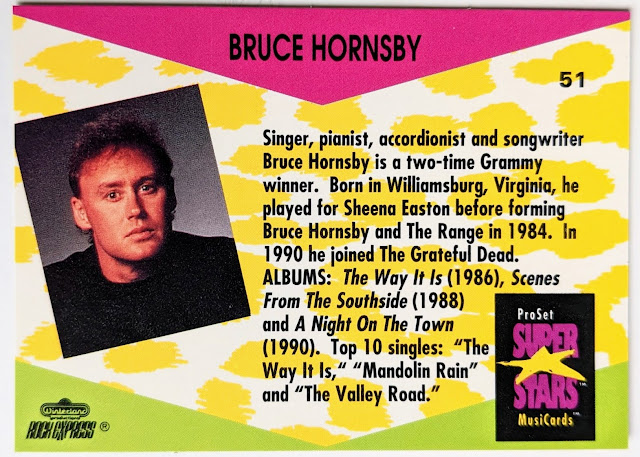 In case you didn't get a good enough look at him on the front, there's a clear headshot of Bruce on the back. I consider The Way It Is to be one of my all-time favorite albums. Just an incredible group of piano-forward Americana pop-rock songs to make you tip your cap to Bruce and his associates. That record had a couple big hits, and his collaboration with Don Henley on "End of the Innocence" in 1989 was another big hit for him. That's basically what I know him from, but he's kept at it for years, releasing over 20 albums and still going strong at 67.
Bruce Hornsby and the Range - "Every Little Kiss"
I should really check out more of his stuff besides the The Way It Is album. I bought the CD for my mom as a Christmas or birthday gift one year circa '91, and while she liked it fine, I liked it more and it eventually found a home in my music collection. (Not one of my better gifts, I suppose!) So I know that album like the back of my hand, but couldn't name you any of his other songs or albums off the top of my head. The only other thing from him in my music library is Intersections (1985–2005), a 4-CD collection of mostly unreleased recordings. Some lovely instrumental pieces there along with jam-band jams.
Grateful Dead ft. Bruce Hornsby - intro jam + "The Valley Road" (live October 30, 1990, Wembley Arena, London)
Back to the card, must have been really cool for Bruce become a touring member of the Grateful Dead after he was in a cover band in college with several Dead selections in their repertoire. With the Dead, he performed over 100 gigs from September 1990 to March 1992. (I'm always curious trying to nail down the deadline for the back write-ups, seeing how late into 1990 [or maybe even early 1991?] they cover.) Bruce also had the honor of inducting the band into the Rock & Roll Hall of Fame in 1994.

Strangely enough, the Grateful Dead aren't included in the 1991 MusiCards set, not even in the whole subset of concert posters of late '60s gigs from the Bay Area. (We'll start hitting those cards after we get into the 200s of the set.) Perhaps the Dead had already signed an exclusive card deal with Brockum, who put out a 10-card "Grateful Dead Legacy" insert set, which I assume was available in packs of 1991 Brockum Rock Cards, a competing line of music cards from '91 that focused more on metal of the era, but slipped in a few mellower oldies too.

Yes, it's the return of the Custom Corner! No more old calendars of mine! The technical difficulties that hampered me in 2021 have been mostly squared away and now I'm getting back into the groove of making customs in Photoshop. Seeing as I've noticed the Dead are conspicuously absent from the '91 MusiCards set, we've got a clear choice of who to feature in today's Custom Corner! 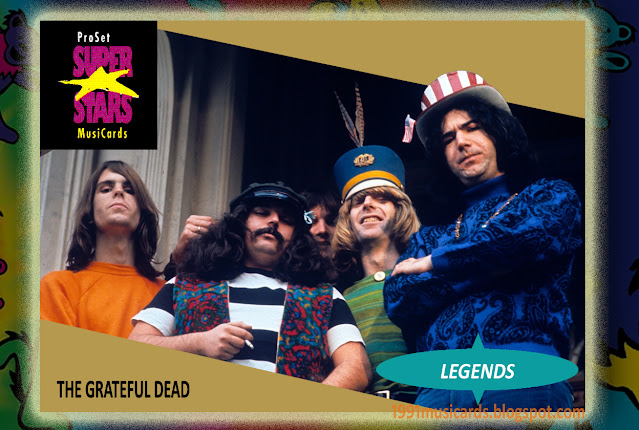 I decided to make this card in a "Legends" style to mix things up since we haven't had one of those in a while. 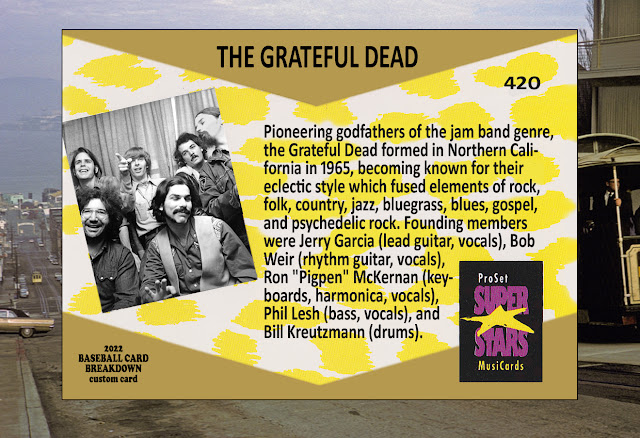 I was never a real "deadhead" though have been a casual Grateful Dead fan for a long time. As a teen, I bought their album American Beauty (though that was mainly because it includes "Ripple", which had been covered by my favorite band at the time, Jane's Addiction.) Some all-time classics on that record, with "Box of Rain"/"Friend of the Devil"/"Sugar Magnolia" making for a very strong opening.

My mom bought Workingman's Dead-- I believe a selection from the brief window she was signed up for the BMG Music Club scheme-- so I heard that one a lot growing up too, with "Casey Jones" and "Uncle John's Band" among the highlights. I eventually got Anthem of the Sun and Aoxomoxoa on CD as well and enjoyed the majority of those cuts. As an adult, I've checked out most of their other studio albums and of course some live recordings, but you've really gotta be deadicated (sic) to delve into their live recordings, as you could probably listen to nothing but live Dead for the rest of your life and still never listen to the same recording twice.

These days, I'd probably give the nod to "Bird Song" as my favorite Grateful Dead track. Technically it was originally released on Jerry Garcia's first solo album, though it became a frequent part of Dead setlists for years. I just now learned it was written by lyricist Robert Hunter as a tribute to Janis Joplin. (Hey, I'll have to feature her in a Custom Corner one of these days. She doesn't have a solo MusiCard, though Big Brother and the Holding Company has a concert poster card coming up at #254.) But yeah, it's a gorgeous song that I've turned to from time to time in recent years when I've needed to chill out from high anxiety getting me down. 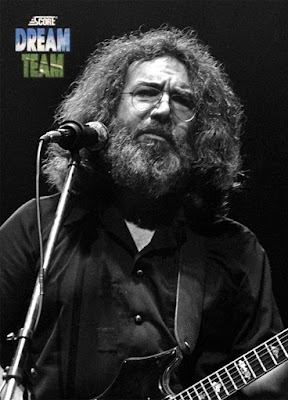 That'll do it for this post. Please feel free to share your thoughts on Bruce Hornsby and/or the Grateful Dead in the comments below.

Oh yeah-- update on last year's contesty-thing... All 4 "thanks for commenting" prizes were mailed out on Wednesday (1/26), so those should start arriving soon.