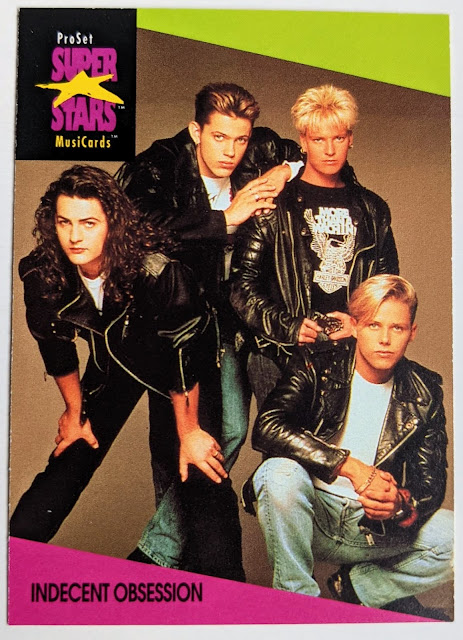 Indecent Obsession slot in at #53 in the 1991 MusiCards set. I've never heard of them, you? Guy on the bottom looks eerily like a young Tom Brady. The dude behind him is wearing a Harley Davidson shirt that reads "More Than a Machine", a statement that was so important for him to make that he went against the guys' trend of plain white tees under a black leather jacket. It's funny to imagine that being a source of contention at the photoshoot:
Young Tom Brady: "Bro, where's your white shirt?! Coach ain't gonna be happy."
Rebel with a Karen haircut: "I wanna wear my HARLEY SHIRT and that's that! And I'm not gonna hunch over for the photo, either! I'm standing tall and proud so everybody can see my badass shirt!"
Anyways, these guys are giving off a New Kids on the Block vibe, which is generally a bad sign. I try to keep an open mind with any act in the set I'm not familiar with, and am often pleasantly surprised when I hear them, but judging by the front photo, I'm assuming I'm not going to enjoy the musical output of this group very much. 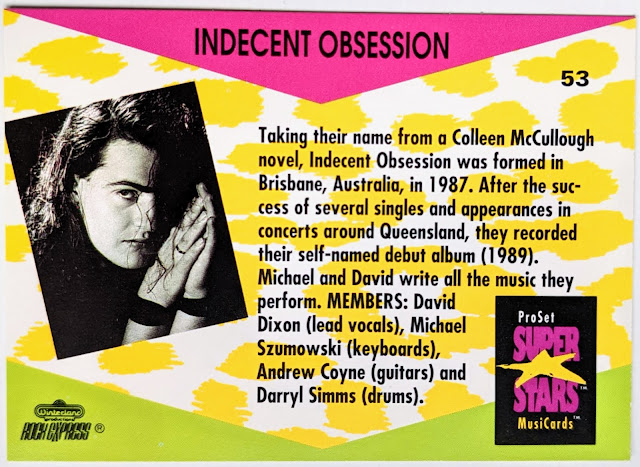 Well, they write all their own songs, so that's cool. And they're from Australia? Perhaps I dismissed them as a wannabe NKOTB prematurely. Looks like only the singer gets included in the back photo, with a moody black & white shot. The write-up doesn't provide any clue as to what they actually sound like, so I'm off to Spotify and YouTube to have a listen.
Indecent Obsession - "Fixing a Broken Heart" (Duet Version)
Spotify only has 2 of Indecent Obsession's 5 albums available. Their most popular track there by a wide margin is "Fixing a Broken Heart" (Solo Version), followed by the "Duet Version" of the same song, and a long drop-off to their 3rd most-popular track, "Lady Rain". Those all seem to be pop ballads.
Indecent Obsession - "Tell Me Something"

The upbeat "Tell Me Something" from '89 was their only single to crack the US charts, though they had moderate success in their native Australia before disbanding in 1995.

Listening to this stuff for the first time today, I'm not into it. But back in the day when I was regularly pumping tunes by the likes of Richard Marx, Paula Abdul, and Milli Vanilli? Sure, Indecent Obsession would've fit right in. (Hell, I'll admit their were even a couple New Kids songs I kinda liked for a brief moment as a young'un. [The best "dirt" I've got on my longtime best friend Doug is I clearly remember once in elementary school he told me New Kids on the Block were his favorite band. I never let him live it down! He denies it today, but it happened. That brief window when NKOTB were cool to all the kids in school, before quickly becoming a girls-only fandom.])

After watching these videos, it's apparent that the person featured in the card's back photo is not the singer as I assumed, but rather the guitar player, Andrew. So, it's neither the guy who sings (David, the Tom Brady-looking guy) nor the guy who writes most of the music (Michael), but I guess the person at Pro Set choosing photos just decided the guitarist looked the coolest of the bunch. lol

If you're wondering, the Harley shirt guy is the drummer, Daryl. Here's the link to their Wikipedia entry in case you're inspired to learn more about Indecent Obsession.

Australia will have more representation in the set coming up very soon with INXS a couple cards away. Scanning the checklist, looks like Men At Work show up later in Series 2, while Australian sisters Dannii Minogue and Kylie Minogue each have 4 cards in the UK edition.

Changing gears, Tears For Fears released a new album last month. They're one of my all-time favorite bands, and conspicuously absent from the MusiCards set, so I knew I was going to have to whip them up a custom eventually, and I figure I might as well do it now while they're back in the music press. 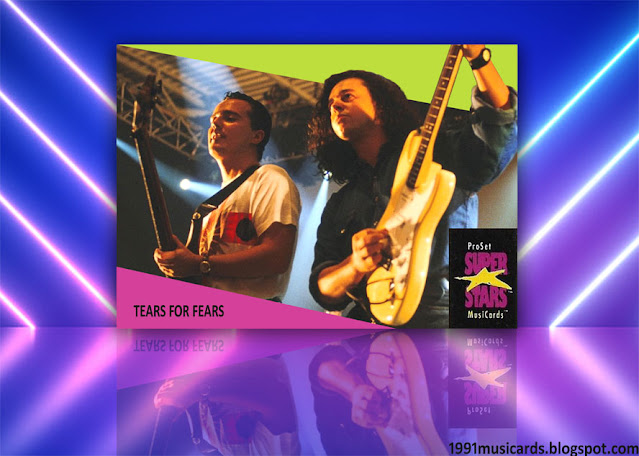 I know I took some liberties by breaking the photo out of the restrictive design, but this custom would have made a fine addition to the set, if I say so myself. I even used an era-appropriate photo from 1990. The Seeds of Love was released in late September 1989 and went on to be an international hit, riding high on the charts for several months in several countries as they toured the globe throughout 1990. Must've been a licensing issue keeping them from receiving a MusiCard, as I'm sure Pro Set would have loved to include one of the biggest bands in the world at that time in their product. (It's not like they were bumping Tears For Fears off the checklist so they could make room for Indecent Obsession, LOL.)
I know I've blogged about the story before, but one time when I was a young kid, I was at a friend's birthday party at the local roller-rink one weekend afternoon circa 1985... just having fun skating laps with the gang while the arena was filled with not only light beams bouncing off the mirrorball above, but also popular hits of the time playing over the soundsystem. I remember "Everybody Wants to Rule the World" came on and my eyes widened-- I was like "(WOW! This is great!)"-- a perfect song to go along with the perfect time I was having. Just an incredible feeling all around. It was like a grand awakening for me and basically from there I was on my way to music being a key aspect of my life. I'm sure you other music lovers have similar stories from when a song first "blew your mind" like that as a kid... That first "fix" that led you to become a music junkie.

If I had to rank the TFF albums by my personal preference, I'd say Songs From the Big Chair (1985) and The Seeds of Love are neck-and-neck for the top spot in a virtual tie. Love 'em start to finish. The Hurting (1983) is an excellent debut, but the production leaves me a bit cold compared to the lush, orchestrated albums that followed. 1993's Elemental is incredible, but the absence of Curt Smith sort of makes it feel like a Roland Orzabal solo album rather than a true TFF album.

Raoul and the Kings of Spain followed in 1995 and I didn't even bother to listen to it. I heard the single "God's Mistake" and didn't like it, mostly preoccupied with heavier alternative rock at the time. I finally listened to that record years later, and it's okay, but again, feels like it should have been released as a solo album. And yeah, I know Roland does the majority of the songwriting and singing in Tears For Fears, but it still feels off when Curt isn't around.

Thankfully the pair buried the hatchet in the following decade and 2004 saw the release of Everybody Loves a Happy Ending, which is among the best reunion/comeback albums I've ever heard; a forceful return to form.

I was able to catch Tears For Fears perform live in 2014 at a music festival here in Portland. It was a terrific set and my wife and I had a blast. During the show, once between songs they mentioned they were working on a new album. I waited patiently... and then waited less patiently... and now nearly 8 years later, The Tipping Point was finally released here in early 2022. I like it, though it hasn't grabbed me quite as much as Everybody Loves a Happy Ending did. --at least not yet, though I want to listen to it a few more times in the coming weeks and see how it grows on me.

Further illustrating my indecent obsession with the band, I've got some quirks with my preferred method of listening to TFF albums, with tweaks to the playlists in my music library: 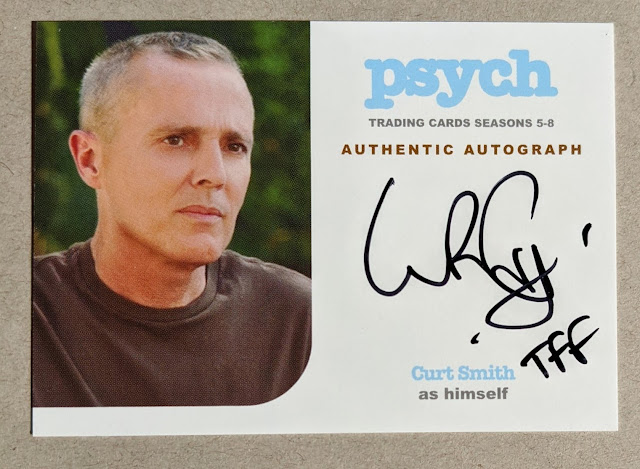 I've been slowly-but-surely watching through the show Psych on Prime, though I haven't gotten to the episode with Curt Smith's guest-spot yet. Happy to have his autograph along with a 7-Eleven lenticular disc from 1985 to represent the band in my card collection. Maybe I'll print out a copy of the MusiCards custom from earlier to complement the ensemble, and I'd love to score a Roland Orzabal autograph someday, but unfortunately he doesn't have a convenient auto card on the market like Curt does, so I might have to eventually settle for a signed CD cover or something. 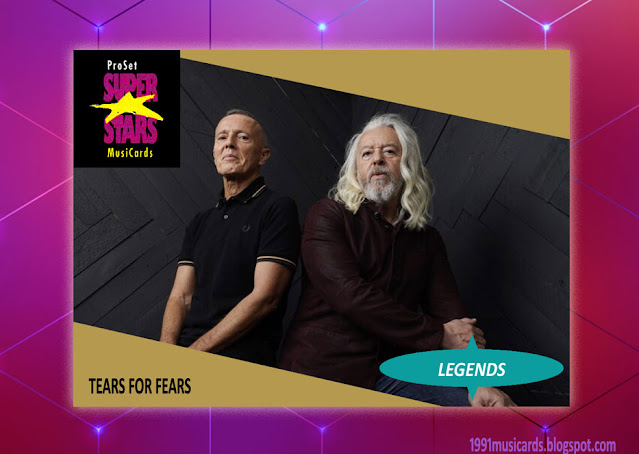 Let's wrap up the post with a bonus MusiCards custom, this time using a recent photo in the Legends subset design. These dudes are getting old! As are we all. Let's hope they keep thriving for many years to come.

What do you think? Favorite TFF song(s)? Any thoughts you might have to share regarding Tears For Fears (or even Indecent Obsession, or like the first time you really connected with music as a kid, or whatever), I'd love to hear it in the comments below.