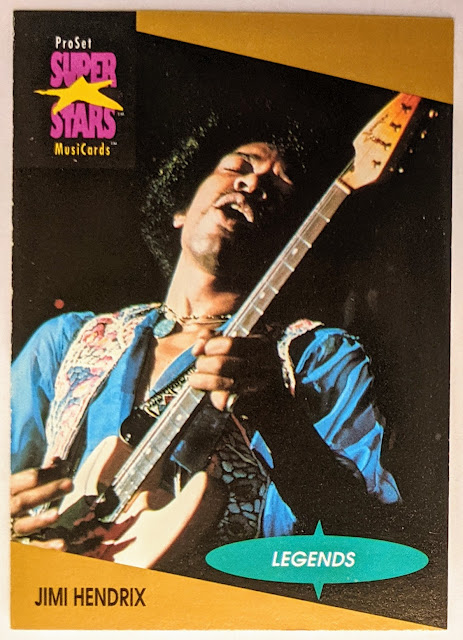 1991 MusiCards SuperStars #10 brings us to the legendary Jimi Hendrix. Great "in action" shot of Jimi doing his thing. I bet there are some superfans out there who could identify which specific show this was simply by the outfit. 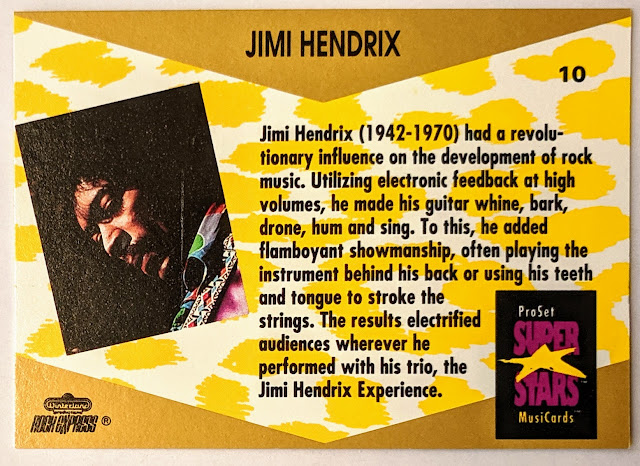 There you go. I don't really know what else I can say. I've been procrastinating writing up this post for a week now, I suppose because I'm a bit overwhelmed. What can I say? Jimi Hendrix was an amazing guitarist. It's hard to imagine rock music without what he brought to the table.

As for the knocks against his legacy? Well, he unfortunately died young. Would have loved to see what he came up with as he entered his 30s and beyond, but we'll never know. And many folks (including him) thought his singing left something to be desired, but by and large I'm a big fan of his work, including his musicianship and his lyrics/vocals.

As a teen in the early 90s, I owned the Ultimate Experience greatest hits collection, as well as his debut, Are You Experienced, on CD. I eventually picked up more of his albums and even a few live bootlegs. That really was some magical shit. While my favorites can mostly be found on his best-of compilations, I also love some of his more obscure stuff, such as his live covers of "Sgt. Pepper's Lonely Hearts Club Band" and "Like a Rolling Stone", and lesser known cuts like "Hey Baby (New Rising Sun)".

Ok, I had to make some tough calls, but I'm ultimately happy with this 24-track playlist to take with me to the ol' desert island.

As always, I'd be interested in hearing what your favorites are in the comments below, whether I picked them or not. 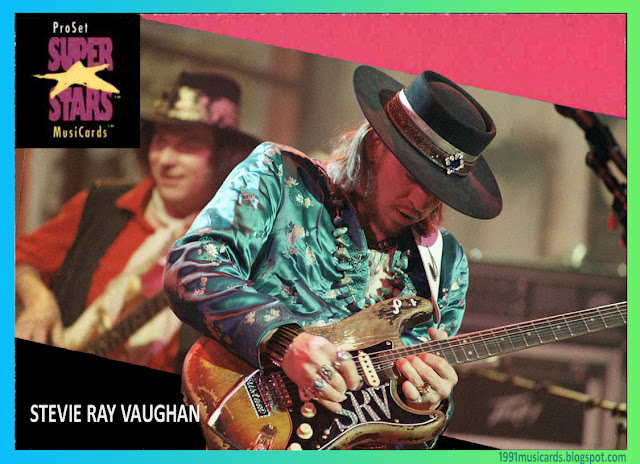 Stevie Ray Vaughan - 1991 MusiCards-That-Never-Were custom (Note that I had a little fun with the photo popping out of the design; Hopefully this doesn't offend any MusiCards purists out there. LOL)

Stevie Ray Vaughan is another big name left out of the 1991 MusiCards set. He had just recently died that previous August in a helicopter crash, so that might've played a part in his exclusion, though it wouldn't have been strange at all to see him in the Legends subset among the likes of his peers Clapton and Hendrix.

One of my favorite SRV tracks is the instrumental cover of Jimi's "Little Wing", so he felt like a good choice to be the custom pairing for this post.

Honestly I didn't really get unto SRV until later in life. I remember kinda liking his hit "Crossfire" in my younger days, but I didn't really check out his stuff until getting ahold of The Essential Stevie Ray Vaughan And Double Trouble in my 30s. Like Jimi, he was an incredible guitarist who sadly left us too soon.

All right, keeping this post tight rather than rambling on too much this time. Next up is the other Hendrix card in the Legends subset.
at November 17, 2019