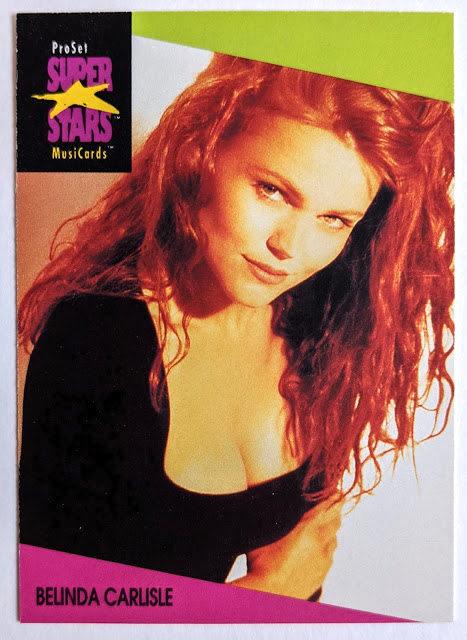 Belinda is back. You're looking at card #37 in the 1991 MusiCards set. Personally I like this photo a lot better than her previous card (#36) for reasons I can't quite put my finger on. (It's the boobs.) 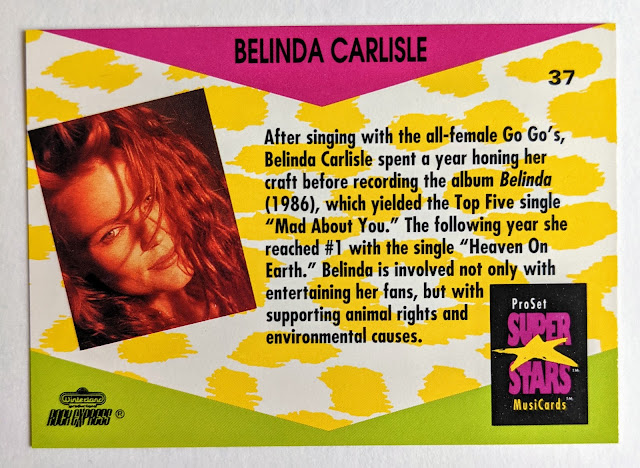 Ah, we should all be so lucky as to spend a year honing our craft.

"Heaven is a Place on Earth" is a damn catchy tune, gotta admit. Things weren't all that heavenly for her at the time, though, as she struggled with substance abuse issues behind the scenes for many years. But she's cleaned up these days, thankfully. Her and her husband of 35 years currently live in Bangkok and have a son together.

We'll get into The Go-Go's when we get to card #47, but for today I'm going to cut it short here and move on to the next thing....

A to Z Music Challenge

Chris The Collector recently kicked off a blogging challenge asking for your favorite band for each letter of the alphabet. I'm putting a spin on it by listing the artist with the most tracks currently in my iTunes. (Yeah, it's kind of a cop-out since I don't need to make any tough judgement calls with my heart, rather just going by the numbers.)

I'm kinda curious to see if this will equate to who I'd consider my favorite. I've been transitioning more to streaming for most of my music listening in the past year or two, but back in the 2010s I spent a lot of time fine-tuning my iTunes library. Like with my card collection, there's always room for more organization, and thinning out stuff I don't really want, and adding new stuff that interests me-- but overall it gives a decent representation of what I like. Of course some great bands only put out a record or two before imploding, and some "just ok" bands stayed together for decades, so quantity doesn't necessarily equal quality. But it's just a writing prompt, so let's not overthink it too much.

Technically their name starts with an ellipsis, but iTunes ignores that and lists them by "And" so here they are. I'm comfortable agreeing they're probably my favorite A band.

Lots of great bands starting with B, but the Beatles run away with this one.

This one surprised me. Sure, I like them, but I would not consider them in the running to be my favorite C band. Also showing up in this letter is Cracker, a Camper Van Beethoven offshoot, with 60 tracks.

Bowie floats to an easy win here, though if you want to get technically perhaps he should be considered a "B" artists. But people in my music library are generally sorted by first name, so here he is. If it were just down to bands, the Decemberists (77) barely edge out 90s alt rockers Dig (73).

This tongue-in-cheek rock band have consistently cranked out a new album literally every year since 2003, so it's no surprise they've got so many songs. ELO are a strong 2nd place (97 tracks).

Love me some Frank Black. Counting his late 90s/early 00s output with the Catholics, he's likely #1 overall in my music collection (especially if you also count his other band the Pixies, and his solo stuff released under the name Black Francis). Also hitting the 3-digit threshold for F are the Flaming Lips.

Guided By Voices' frontman Robert Pollard is notorious for cranking out songs like he's brushing his teeth. So even though I probably wouldn't put GBV in the running for my favorite G-artist, they've managed to narrowly beat out Guns N' Roses (72 tracks).

Another surprising one for me. They are a Portland-based band, though I dug them before I moved here. I'd probably say my favorite H band is Hum, but they're not very prolific (35 tracks).

Coltrane pulling off the upset here! He's probably my favorite jazz artists. Another John with a big total is Frusciante (129). If those guys were instead sorted by last name, the top J band would be Jane's Addiction (103).

Old favorites of mine. They've been around since the early 90s and are still releasing music, so they've got lots of songs.

Oh man, if I could only pick one letter for a desert island situation, I might have to go with N. Lots of strong showings here. Nine Inch Nails, New Order, Neutral Milk Hotel, to name a few others.

Looks like N has some competition for top letter. I'm not going to do the math, but P might have the most songs total. Pixies and Pink Floyd also break 100 tracks each. Pearl Jam with 69.

Not much competition for Freddie Mercury & company. Quinton Sung, a guy who did a bunch of 8-bit Radiohead covers, is second with 21.

Rocket From The Crypt - "Tarzan"

Wow, pretty sure R just topped P and N for most overall. San Diego's own RFTC take the top spot here, with Red Hot Chili Peppers close behind at 156. Rancid, Radiohead, Ramones, and Rilo Kiley all also break the century mark, with R.E.M. and the Rolling Stones not far behind.

That's a lot of songs! Billy Corgan isn't shy about releasing outtakes and demos-- probably half their songs in my library are of the "non-album" variety-- and they've added up for me. I wouldn't say they're my all-time favorite band despite what the numbers may indicate, though Mellon Collie and the Infinite Sadness would rank high up on my list of favorite albums.

Another result that surprised me, but I suppose TMBG have been prolific since the 80s. Tom Petty (usually joined by the Heartbreakers) is second with 91.

Bono and the boys are the obvious answer here. Urge Overkill gave them some competition with 40 songs.

I have a lot of tracks under V because I sort some miscellaneous stuff under "Various Artists" (300+ songs), and I also have 74 "video game music" songs (mostly old NES favorites of mine), but I can't count those as one artist.

"Weird Al" Yankovic narrowly beats out Wilco for second, both of whom I probably listen to more than Weezer these days, but I was a big Weezer fan in the 90s and early 00s.

Not a lot of competition here, but the band named X aren't too far behind with 29.

We have our first and only tie of this exercise. Of course, if you boot Yann to the Ts, that'd give the victory to Yo La Tengo (whose name is a baseball reference, I believe).

I also sort a lot of "one hit wonder" type stuff by decade. For example, I've got 300+ tracks listed under the artist "80s".

And now you've got a broad overview of my iTunes library. That was fun. Thanks for the idea, Chris.

Being a teenager in the 90s, it makes sense to see alternative rock from the likes of Nirvana and Smashing Pumpkins rise to the top. Looks like Charles Thompson IV is the top songwriter in my collection, penning around 400 ditties in my library spanning his work as Frank Black and Black Francis / Pixies. Interesting.

Anyways, thanks for reading. Back with another MusiCard soon.