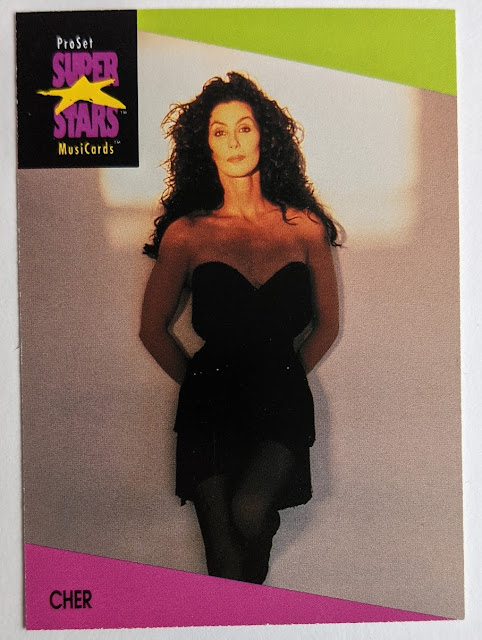 Here's Cher popping into a sunbeam at card #38 in the set. She appears again with the next card up and also has a couple cards in the UK edition. 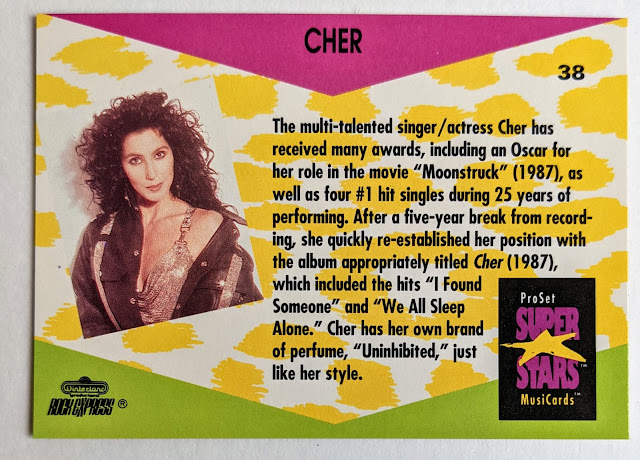 My introduction to Cher was pretty much the "If I Could Turn Back Time" video on MTV. It was like, "Who's this [relatively] old lady showing off her buttcheeks to all those horny sailors?" But I did like the song.
Of course she'd been a popular entertainer for long before that, going back to her Sonny & Cher days. "I've Got You, Babe" has been an unavoidable song my whole life.
The back of the card states she's had four #1 singles. That seems to include "I Got You Babe" (1965), plus her solo tracks "Gypsys, Tramps & Thieves" (1971), "Half-Breed" (1973), "Dark Lady" (1974). Years after this card came out, she made a surprising return to the top of the charts scoring a fifth #1 with 1998's "Believe".
The super-catchy "Believe" was a worldwide smash, selling over 11 million copies. Cher became the oldest female solo artist to top the Billboard Hot 100 chart and the song became the highest-selling single by a solo female artist in the UK. The song is credited with kicking off the auto-tune trend and featured Cher reinventing her sound to an upbeat dance-pop style.
As for the final line of the card back's write-up, doesn't look like her perfume Uninhibited is still in production, but it was a success back in the day, earning about $15 million in its first year. She released a second fragrance in 2019 called Cher Eau de Couture.
We'll continue our Cher talk with the next post. Let me know if you've got any favorite Cher songs or memories in the comments.

Now for the self-centered series I've been doing on the blog for each month of 2021. 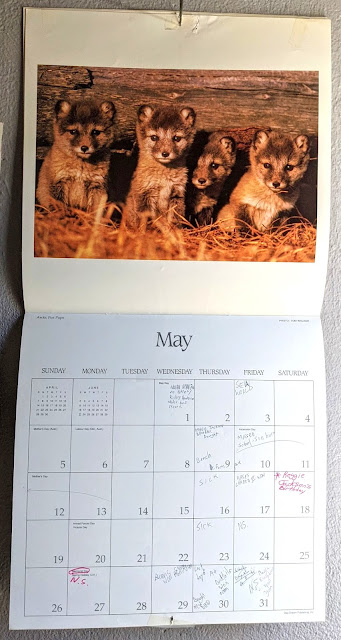 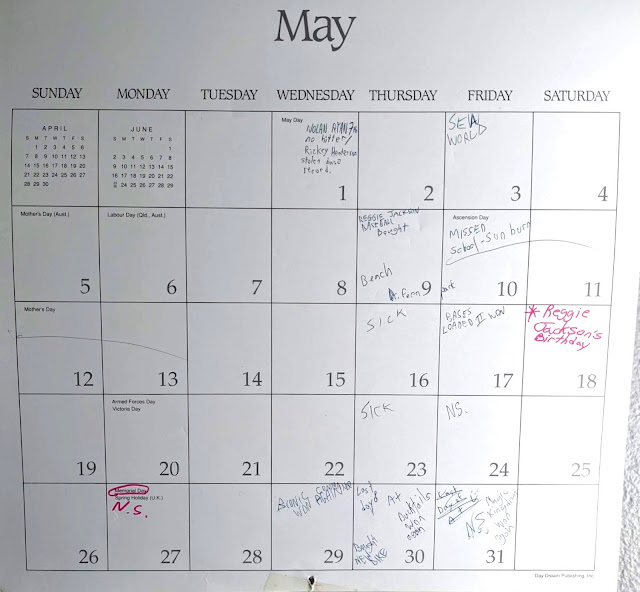 You can tell I was big into baseball at the time, as I've noted the legendary events of 5/1/91 when Nolan Ryan tossed his 7th (and final) no-hitter and Rickey Henderson broke Lou Brock's all-time stolen base record. Man, what an exciting day that was! I was glued to ESPN.

Looks like I had a couple fun outings in May, with a trip to SeaWorld followed up the next week with a day at the beach. But I was stupid (and very pale) kid and sunbathed that day without any sunblock and I paid the price. The next few days were among my most uncomfortable of my life as I got sunburned to hell. Since that day, I've been one of those guys who almost always wears a shirt at the beach/pool and I give zero fucks if anyone thinks I'm a dork because of it. The sun and I have a shaky alliance. It allows for life on my planet but it's also out to kill me. I'm amazed I haven't had to deal with any skin cancer scares yet. I should probably find myself a dermatologist to start going to every year or two.
That beach day was a field trip with that weird private school I went to for 7th grade. The fact that the adults in the group didn't bother to maybe express concerns about the pasty white kid baking himself in the sun-- you know like be a voice of common sense to maybe cover up and/or be better about sunscreen-- goes to show what a shitshow of a "school" that was. But that bizarre chapter of my life came to a close on May 30th, my last day at A+ Academy, returning to public school after summer break that year.
Looks like I got a celebratory new bike on the last day of school. It was a really cool Mongoose that looked great and was a joy to ride, but tragically it got stolen out of my back patio one night a few months later in one of the most heartbreaking moments of my childhood.
Geez, this calendar page is digging up some bad memories for me! :( And Dr. Fenn (5/9) was my orthodontist, so that reminds me of the burden of having braces for a year and how terrible that whole experience was.
But for happier memories, well, it was the golden age of video games for me. While Nintendo was king, I also had a Sega Master System back then. On the same fateful beach day, I got Reggie Jackson Baseball for Sega, likely as a "reward" for the dreaded orthodontist appointment. 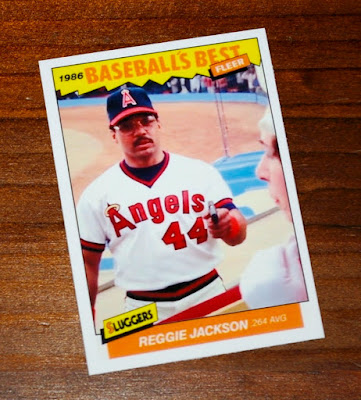 Reggie Jackson was my favorite player back then, with his birthday (5/18) being a red letter day in my world. He had been retired for a few years already, but was still among the best-known names of the game, with his celebrated role in Naked Gun helping keep him in the public eye even after his playing days were done. I remember his Baseball Heroes inserts in 1990 Upper Deck being a big deal in the hobby then, not even considering in the birth of the pack-inserted autograph card craze they ushered in that has eventually seen "hit" chasing grow so unwieldy that Target and Walmart won't even sell baseball cards anymore now for safety reasons. 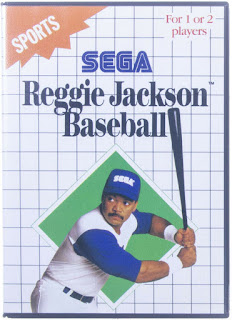 But back to Reggie's baseball video game, I barely remember it today. Out of the 3 baseball video games I remember playing most as a kid, I'd rank it in the middle with Roger Clemens' MVP Baseball being the worst and my favorite being Bases Loaded 2, which thanks to keeping this calendar, I know I beat for the first time back on 5/17/91. And it's a long game.. playing a full season of baseball games.. so it probably took me a few months. I'm pretty sure I led the Boston blue-guys all the way to a World Series victory.

I'm actually now in the middle of playing through Bases Loaded 2 again (via emulation on computer hooked up to the big living room tv), again picking the Boston blue-guys as my team for sentimental reasons. I know it probably wouldn't rank highly on any list of all-time best baseball video games, but it's what I grew up with and what I'm most familiar with. The game was originally released in Japan in 1988, but not in North America until early 1990, so it lined up with when I first got obsessed with baseball. Some quirks about the game include the crack of bat clearly sounding aluminum, and a few speech words (which was pretty cool at the time), with "Strike", "Ball", and "You're!" (which was apparently the closest they could come to "You're out!") That said, the game doesn't have great music and truth is I often play it muted and listen to music on the stereo instead.

When I was a kid, I'd rarely if ever save (write down the password) after a loss, though now as an adult, I'm playing through a season win-or-lose, though I probably win 8 or 9 times out of ten. (I'll admit there are occasional games where I turn it off midway through a losing effort because I'm not having any fun.) The last ballgame I played was a few days ago and man, it was a classic! The opposing team had a really tough pitcher and I was struggling. I had resigned myself for a loss and was just trying to hurry up the game to advance the schedule. But then I had a thrilling top of the 9th to comeback to a 1 run lead. And after a dicey bottom of the 9th where the bad guys had me on edge, I pulled off a couple defensive gems and sealed one of the most rewarding victories in my very long career of playing Bases Loaded 2! 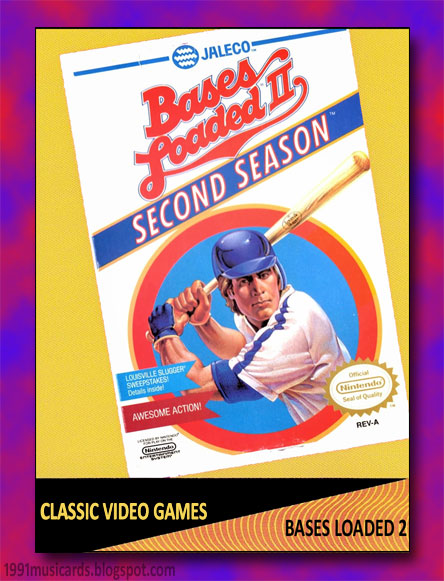 Another fondly remembered Bases Loaded 2 victory is the one time as a kid I threw a no-hitter. It was a mercy-rule shortened game (if one team is 9+ runs ahead by the 6th inning, it's a called game, and I was having a good day at the plate)-- but still! The baseball league in my mind declared it an official no-hitter. It can be really tricky to play good defense in that game, so the accomplishment is as much about making plays in the field as it is for pitching, if not more. I was over the moon to have pulled off the no-no! I don't think I walked or hit anybody either, so it was probably a perfect game too, but I was just focused on the goose eggs on the scoreboard.

Anyways, I've played the game occasionally over the years, but I think my current campaign, begun July 2019, is only the second or maybe third time that I've played through a full season as opposed to just random exhibition games. I remember having lots of fun playing against my best friend Doug back in the day, too. I'll have to remember to challenge him to a game this summer for old time's sake now that he's living in my neck of the woods again. But I'll have to go easy on him since I'm in mid-season form and his skills are undoubtedly rusty at this point, though even as kids I recall being the victor in most of our faceoffs.

Other Nintendo happenings for me in May '91 were again beating Bionic Commando, Ducktales, and Adventures in the Magic Kingdom (a Disney game) in consecutive days to end the month. Funny enough, those games were all made by Capcom, a popular game designer company perhaps best known for the Mega Man and Street Fighter franchises. That Magic Kingdom game kinda sucked, but Ducktales and Bionic Commando are easily among the all-time best NES games if you ask me. In fact, I consider Bionic Commando my all-time favorite video game (or at least tied for the top spot with Maniac Mansion), and had planned to ramble about that game to fill up this post, but it seems I've already rambled enough about Reggie Jackson and Bases Loaded 2, so I'll have to save blathering on about Bionic Commando for another day.

Back with more Cher soon. Thanks for stopping by the blog!