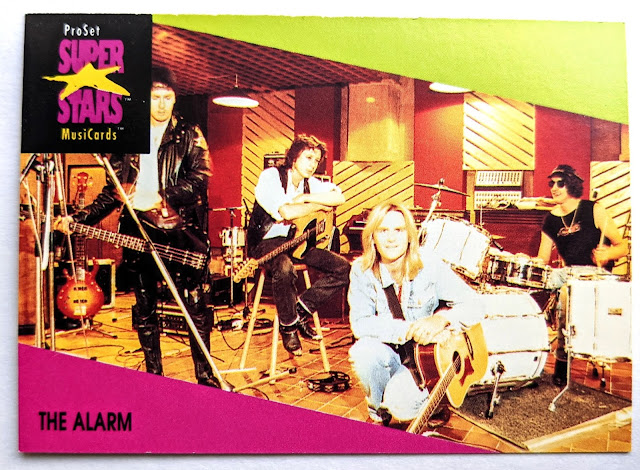 The Alarm makes the 1991 Pro Set MusiCards SuperStars set at card #31. While I've enjoyed songs from the band over the years, honestly I don't think I've ever seen them before this. So that's cool. Interesting shot of the guys in a studio. Wonder if this was taken during a rehearsal or recording session or what. 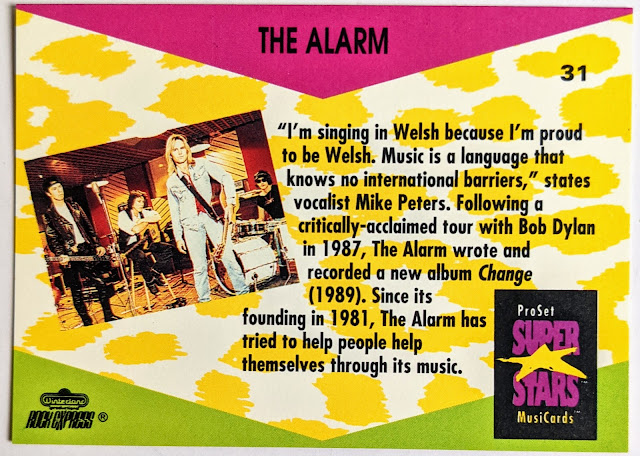 The back photo here was taken very near the same time as the front. I got a kick out of the guy in the middle who hasn't moved at all between shots. Must've been deep in thought! Or maybe he's just patiently waiting for the photographer to finish up so they can get to the next song.

And how about that write-up? If you weren't familiar with the band before reading it, you'd have to assume they do Bob Dylan-inspired self-help songs about Welsh pride.

This is the Alarm's only MusiCard in the set(s)-- not in the UK edition despite having more success on the UK charts than US. And it's funny that they're in the pop section of the checklist, not the rock section, but I suppose they could go either way as a new wave pop band.

The band's origins begin in '77 with a punk band called The Toilets before eventually morphing into The Alarm in 1981. They had early minor hits with "The Stand" (inspired by the Stephen King novel) and "Sixty Eight Guns", and the band opened for U2 on the War tour in the US. They kept busy touring and recording throughout the 80s, scoring their lone US Top 50 hit with "Sold Me Down the River" off 1989's Change. That album had an alternate Welsh-language version, which is what the quote on the back of the card was talking about. The band suddenly broke up in '91, but eventually reformed by the end of the decade and.. wow, are still active today.

The radio station I listened to as a teen (91X) played a lot of The Alarm, so I grew up on their hits in the 90s, but I was always a little confused about how they weren't more popular. I don't recall ever seeing their videos on MTV, for example. But yeah, tunes like "Rain in the Summertime",  "Love Don't Come Easy", and "Rescue Me" are all classics in my book. But I'm more like a "Greatest Hits" fan, as I don't think I've ever dived into their back catalogue, but maybe someday I'll give them a deeper listen.

Here's a new feature for the blog in 2021 where I'll celebrate the 30th anniversary of the set by looking back to 1991.

The big news of January '91 was the beginning of Operation Desert Storm. Hit songs topping the charts included Madonna's "Justify My Love" (I never liked that one much), Bette Midler's "From a Distance", and Damn Yankees' "High Enough". Home Alone was king in theaters-- feels like its legacy is a Christmas movie, premiering the previous November, but it held the top spot at the box office until February '91.

In baseball, the Hall of Fame announced Rod Carew, Ferguson Jenkins, and Gaylord Perry had been elected to Cooperstown by the BBWAA on January 8th. Current free-agent ace Trevor Bauer was born January 17, 1991.

As for me, I was a middle school kid into video games, baseball cards, and MTV. 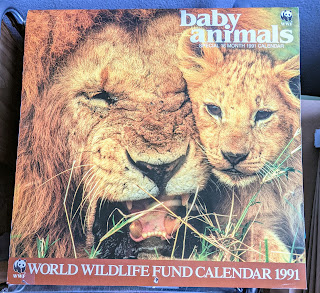 And baby animals? Turns out I've still got the wall calendar I used in 1991, so I thought it'd be fun to look back at what I was doing 30 years ago. 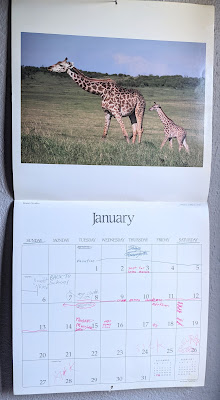 Not only did I mark upcoming events, but also used my calendar as something of a journal, often writing down notable happenings in my 13-year old life. Let's take a closer look at my January '91... 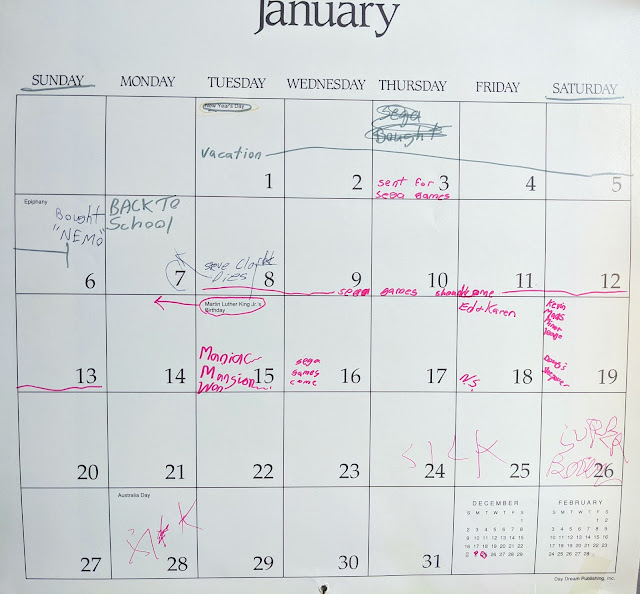 The year started off well with the the last few days of winter break.

On the 3rd, I ordered some Sega games. I think that was a Sega Master System, but at some point I also got a Sega Genesis. Perhaps upcoming months will provide clues to figure out which Sega console I was talking about here. You can see I estimated the games arriving sometime between the 8th and 13th (Sunday? Dummy. This was pre-Amazon, of course!), but my estimate was a little optimistic, as they didn't actually get delivered until the 16th.

Another video game I bought-- must've been spending that xmas/b-day gift money-- was the NES game Little Nemo: The Dream Master on the 6th (Probably at Target). I do still love that game (despite a few frustrating parts), and in fact played through it again a couple summer's ago (7/21/19, to be exact.. yes, I've started keeping a video game journal in recent years.)

My favorite band at the time was Def Leppard, which explains the "Steve Clark Dies" notation for Jan 8. He was the principal songwriter and lead guitarist for the band until his alcohol-fueled death. That was a major bummer. Def Leppard doesn't have a MusiCard, but I'll have to cover them on the blog at some point.

Jan 15 was notable not just for MLK's birthday, but also for being the first time I beat the NES game Maniac Mansion. 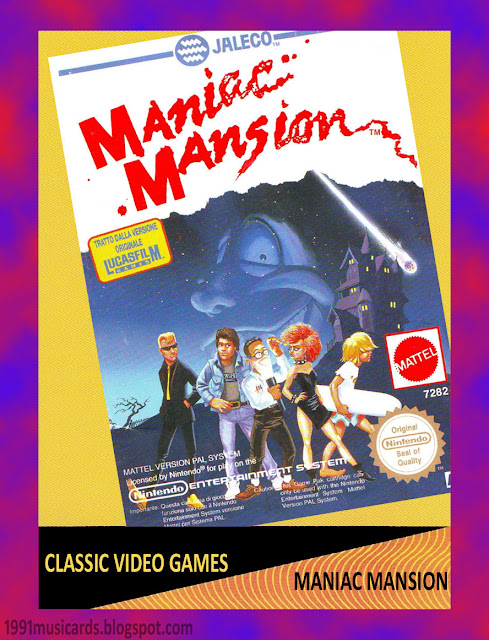 I had gotten the cartridge 3 weeks earlier as a Christmas gift. To this day, I'd say it's my all-time favorite video game, or at least tied for the top spot with Bionic Commando. It's a lot of fun and the music's great, too. Any other Maniac Mansion maniacs might appreciate that younger me tried to mimic the font used for the game's title. I've played through the game 5 times already just since I started keeping track of my video gaming about a year and a half ago. These days I can finish the game in one evening, but you can pick different characters to play as, and there are different strategies you can use to complete the game depending on which kids you picked, which helps with replayability. Some people know Maniac Mansion from the 90s TV show of the same name, but the show doesn't really have anything to do with the game. Oh, and the NES game has some notoriety for being known as the game where you can explode a hamster in a microwave, a naughty bit of violence that managed to slip by Nintendo's overzealous censors at the time. But I just think the game is a lot of fun, plus as I say, I love the music in the NES version, and playing that game for me is very much like listening to a favorite record.

Closing out my Saturday with some Maniac Mansion on NES. Best/hardest-to-get ending: Sally at the talk show with the Meteor Police. Nice. pic.twitter.com/au3CqfL9ze

Like I said in the tweet, to me, the hardest-to-get, longest, and best ending is to get both Sandy and the Meteor Police at the talk show. That's the ultimate way to beat the game, if you ask me, and plus I love the music at the talk show, so I often try for a talk show ending. That ending requires killing off Wendy and Bernard. But I'm just nerding out on Maniac Mansion now, ha. 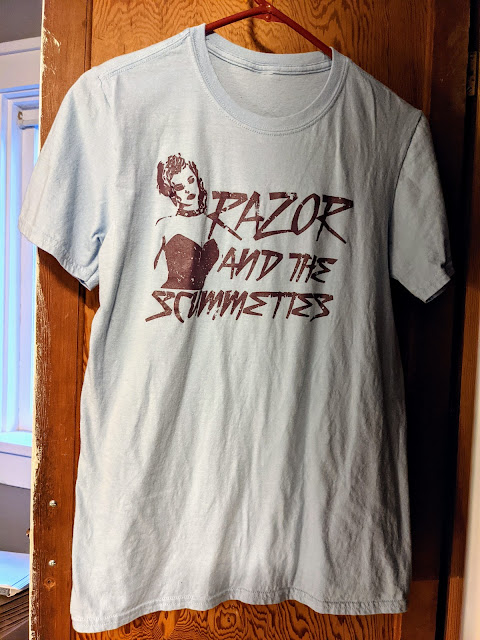 I'm not usually a "clever t-shirt" guy, sticking mostly to a boring, nondescript wardrobe, but a few months ago I got this shirt featuring an image from the hint poster that came with the game. Not sure if anyone will ever get the reference should I be wearing it out and about, but I think it's incredible.

Ok, enough about Maniac Mansion; back to the calendar... Friday 1/18, I had no school ("N.S.") and apparently my Uncle Ed and Aunt Karen were in town from Chicago. That's nice. Haven't seen them in years, sadly. They had a bit of a falling out with the rest of the family around the turn of the millenium, though I'm still on good terms with them at least. 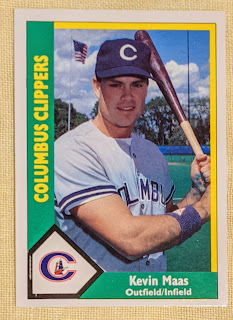 Saturday the 19th was highlighted by pulling a Kevin Maas minor league card-- a big deal at the time! He was coming off his impressive 1990 debut where he hit 21 taters in half of a season, so obviously that translates to 40+ HR every year for the duration of his career, right? LOL-- and then a sleepover at my best friend Doug's house. Those childhood slumber parties were some of the best times of my life.. having fun hanging out late into the evening and occasionally getting up to mischief under cover of darkness.

Looks like I had a 5-day weekend as the month came to a close, thanks to a sickness (very possible I was exaggerating a minor discomfort in order to play hooky). I've noted Super Bowl Sunday Saturday?, but I didn't give a shit about football at the time, perhaps evidenced by the squiggly writing, which I think was meant to convey eye-rolling. But anyways, that game was Scott Norwood's heartbreaker, with the Giants squeezing by the Bills, 20–19. Whitney Houston sang "The Star-Spangled Banner" and it became a hit single.

So that's how my life was going 30 years ago. Hope that wasn't too self-whatever-ing on my part and you readers got a kick out of the look back, because I hope to do the same for the next 11 months as we get to them.

In addition to the '91 calendar series, I've got big plans for a special reader appreciation event this year to help celebrate the MusiCards milestone. Basically it's a contest/giveaway with your comments over the year being key for getting cool stuff. Hopefully it'll help motivate some lurkers to chime in with their thoughts regarding the artists/cards/etc we cover here. I always appreciate hearing what you all think. Anyways, I'll have more details on this contest thing later on.

That'll wrap up this post. What were you up to in early 1991? Ever play Maniac Mansion? Any thoughts to share on The Alarm, or favorite songs or specific memories of the band?