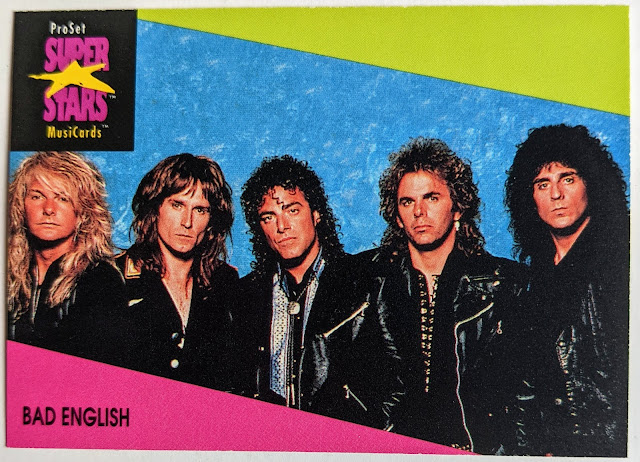 We're up to #32 in the set: Bad English. This photo feels like a throwback to the hair metal bands of the 80s.. you know, a few fellas looking tough in leather jackets with long, poofy hair. There are a few MusiCards along these lines, but such acts were on the decline by the time ProSet was shipping these cards to retailers in 1991. I still dig a lot of that stuff, even if the look hasn't aged particularly well. 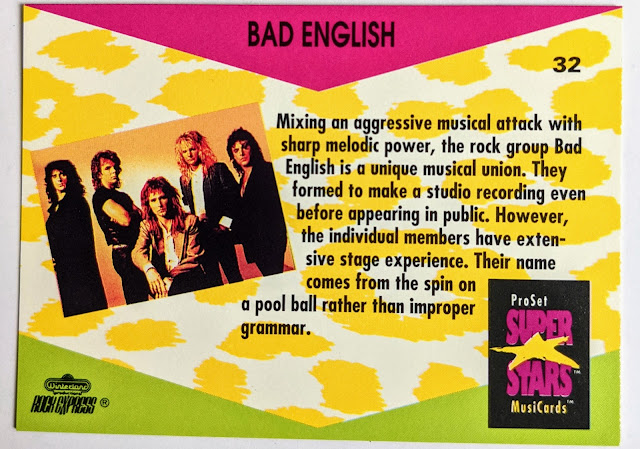 Bad English is vaguely familiar to me, but I couldn't name you any of their songs off the top of my head. I want to say "Bad Company"... but no, that's a different rock band with a similar name.

The write-up indicates they were something of a supergroup, with guys coming from other established bands. That's John Waite on vocals, right?

Ok, I just looked up the band on Spotify and their most popular song by a wide margin is "When I See You Smile".

Oh yeah! When it gets to the chorus, now I remember this song. I heard it a lot back then, and occasionally still get that chorus stuck in my head these days even though I forgot who the artist was.

So yeah, seems these guys' bread & butter are power metal ballads. Not my favorite genre, but I can still appreciate a cheesy love song with big guitars.

Reading up on the band, turns out they were an offshoot formed after Journey broke up. And yep, I was right about John Waite, so that's cool. (Loved his "Missing You" song back in the day.) Their self-titled debut came out in June 1989 and did pretty well, with "When I See You Smile" going to #1 on the Billboard Hot 100 among a few successful singles. The follow-up record, Backlash, came out in August of 1991 but the band dissolved around that same time with the guys all straying to other projects, and that was it for Bad English.

I think I'll use this moment to clarify for myself the difference between Bad English and Bad Company.

Bad Company are an English band, adding to the confusion. lol 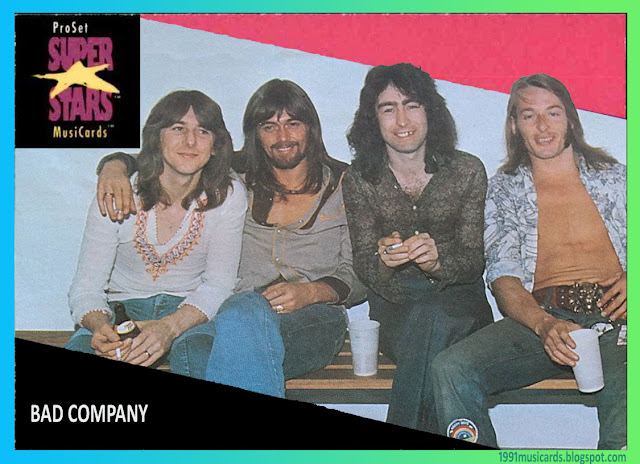 But no, Bad Company is best known as the rock and roll outfit behind the classic rock staple "Feel Like Making Love" and a few other solid hits in the 70s including the eponymous "Bad Company". Like Bad English, you could call them a supergroup: two former members of Free, singer Paul Rodgers and drummer Simon Kirke; former Mott the Hoople guitarist Mick Ralphs; and ex-King Crimson bassist Boz Burrell.

They were before my time, and I'm only familiar with their hits, but I like what I've heard from them. If I had to pick between Bad English and Bad Company, hands down I'm going with the Co.
And I'm sure I'm not alone there.

Around the new year last year I shared my favorite songs of 2019. But I don't really have much to share regarding my favorite songs of 2020. The time during my commutes to and from work is where I typically check out new music, and seeing as I've been mostly working from home, I just haven't been listening to much new stuff since corona. I should probably break the habit and try listening to more music while I'm at home.

But when I put on music at home, it's usually old favorites that my wife doesn't mind, rather than drag her along for the ride digging up unfamiliar stuff. I also listen to music on headphones nearly every night when I go to bed-- I'm one of the unlucky people who take a while to fall asleep once my head hits the pillow, so I can usually get an album in before I drift off to dreamland-- but I tend to stick to familiar favorites in that situation rather than challenge my sleepy ears with new stuff.

One old song that I only first discovered last year was "Johnny and Mary" by Robert Palmer. What a cool song! From 1980. Doesn't sound like the later "Simply Irresistible" and "Addicted to Love" stuff he's best known for.

Anywho... any of you readers find any new favorites last year?
What do you think of Bad Company and/or Bad English?