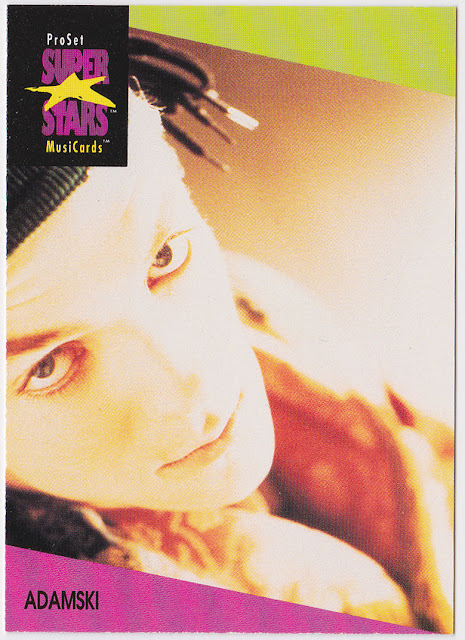 Adamski is back with the second of his two cards in the 1991 ProSet SuperStars MusiCards set at card #30. I think this is the tightest headshot we've seen in the set so far, with his face taking up about half the card. 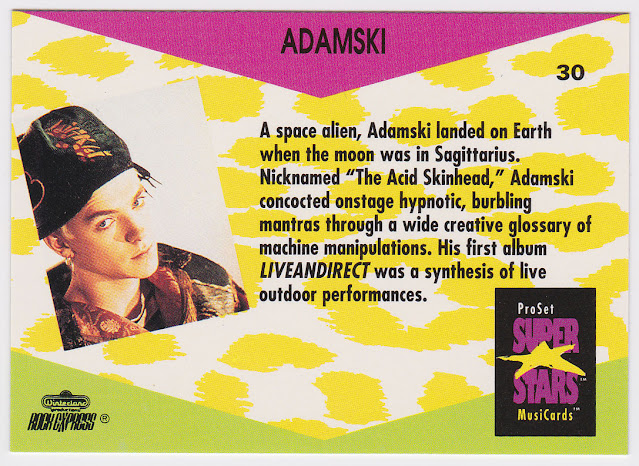 Ha, and that's probably the weirdest back write-up in the set so far. I think the bit with Pro Set claiming Adamski is a extraterrestrial would be known as "kayfabe" in wrestling-- going along with the made-up storyline for the benefit of the fans.

The comments on the previous post pretty much confirmed my suspicions that the vast majority of North Americans aren't familiar with him, but he was big in the European rave scene in 1990. "Killer", a collaboration with then-unknown Seal, went to #1 in the UK and Belgium, #2 in the Netherlands and Germany, and #5 in Ireland and Sweden.

But before we go labeling him a one-hit wonder, well, the follow-up single "The Space Jungle" went to #7 in the UK and broke into the top 30 in a few other countries, so I guess technically there's another Adamski hit. Despite the title, the song is effectively a modernized cover of the old Elvis Presley tune "All Shook Up" (written by Otis Blackwell in 1956).

I was thinking maybe Otis Blackwell for today's custom, but instead let's pencil him in at #237, pairing him with The Smithereens, a band Otis toured with in his later years.

Adamski's real name is Adam Tinley, so I thought I might try to think of other Adams in popular music. Musicians with that first name popping to mind for me are Adam Ant, Adam Yauch and Adam Horovitz of the Beastie Boys, and U2 bassist Adam Clayton... all of whom are featured on MusiCards already.

I took a look in my iTunes library and found songs from a couple Adams in my music collection. 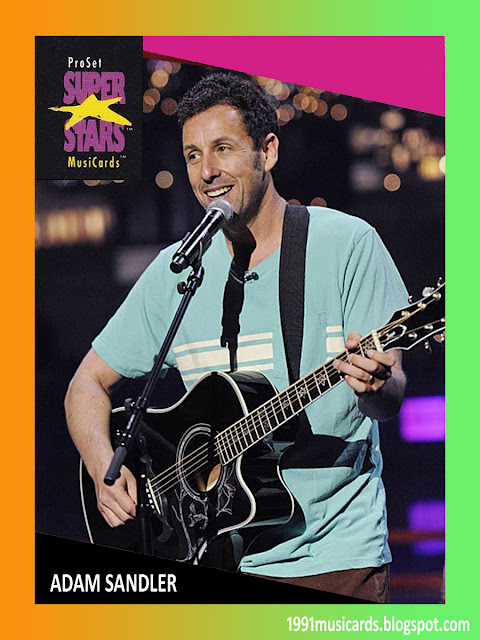 Adam Sandler has had quite the career, getting his start as a popular cast member on Saturday Night Live in the early 90s and going on to a successful string of comedy films. His lowbrow humor might have worn thin for many by this point, but he still cranks out projects on a regular basis, and received universal praise for his dramatic turn in 2019's Uncut Gems.

At some point I ended up with his first 3 albums. I may have bought one of them, but the rest were hand-me-downs from friends who stopped listening to them.

"The Chanukah Song" is probably his best-known song, debuting on SNL's "Weekend Update" and later featured via in-concert recording on What the Hell Happened to Me?

Another song off that album, "Ode to My Car", got some censored radio play on the main station I listened to back then, San Diego's 91X, and I liked it well enough to buy the CD. Or maybe a friend of mine bought it and I just borrowed it.. hard to remember at this point. Another favorite song is "The Goat Song" from What's Your Name? which is kind of a rock opera callback to an earlier skit ("The Goat" from What the Hell Happened to Me?).

Switching from a very well-known Adam S. to an obscure one, Adam Snyder is the other Adam to feature today. Not to be confused with the football player with the same name, this Adam Snyder was the keyboardist in Mercury Rev for a stint and helped create their most successful record, 1998's Deserter Songs. That's how I'm familiar with him, but my curiosity lead me to check out some of his solo demos, which I think I got on CDR from a guy who was friends with him. Turns out when left to his own devices, Adam comes up with Americana folk songs. Don't sound much like Mercury Rev (one of my all-time favorite bands), but some quality ditties none the less. He went on to release a couple records, Across The Pond (2001) and This Town Will Get Its Due (2006). The albums feature a full band, though honestly I think I prefer the earlier versions I first heard where it was just him singing while playing acoustic guitar. Those recordings sound super intimate, perfect music for when you're not 100% awake, like late at night or early in the morning. My favorite songs of his are "Leaves of Grass", "Until it Comes", and "Thru Til Morning" off that early demo CDR titled Until it Comes. But the finished versions aren't bad either. If you're into mellow folk music, might be worth giving a listen.

Not sure what Adam Snyder is up to these days, though in his career he's worked with luminaries such as New Order and The Waterboys. Looks like he had a band called The Red Cars in recent years, though I can't find much about them.

That'll do it for today. I'm excited for the next post... where we sound The Alarm. 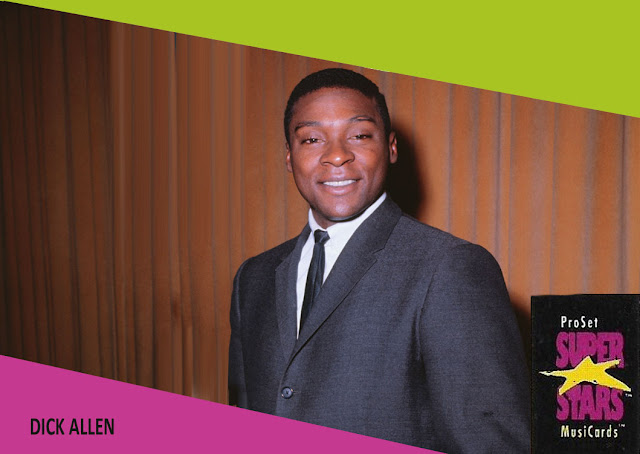 I was heartbroken to hear of Dick Allen's passing today. He's one of my favorite baseball players to collect, as has been documented over the years on my main blog, Baseball Card Breakdown. Hurts to lose him. Man, what a rough year. :(
This above MusiCard custom isn't as far-fetched as you might think. One thing I learned about Dick Allen recently is that he had a brief recording career. Yep, in the 60s he sang lead with a doo-wop group called The Ebonistics. They performed in the Philadelphia nightclub scene and occasionally had a high-profile gig, such as halftime at a 76ers game.
"Echo's of November" was the group's biggest hit.
The guy won NL Rookie of the Year, AL MVP, and had a successful recording career on the side. That's pretty impressive. Rest in peace, Mr. Allen.
at December 07, 2020