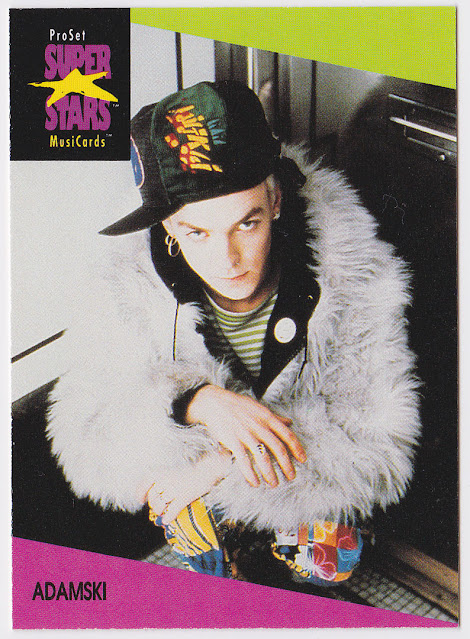 Card #29 in the 1991 ProSet MusiCards SuperStars set features the first unfamiliar name for me so far. I can say as I type this opening paragraph that I don't recall ever hearing of Adamski (beyond perusing the checklist for this set) and if my ears ever came in contact with an Adamski song in the past, well I have zero recollection of it.

My first impression based on this photo is he looks like the missing link between Vanilla Ice and Eminem, though a little more "glam" with his fashion sense. But is that what he sounds like? We'll find out soon enough. 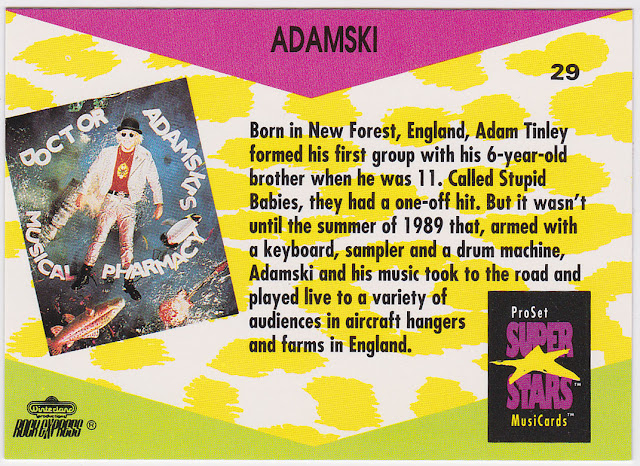 The back gives us a good introduction. There's an odd "Doctor Adamski's Musical Pharmacy" picture and a write-up of how this performer got his career started. Perhaps he was bigger in the UK and that's why I never heard of him? He has 2 MusiCards: this one and another one immediately after it. He's not in the UK version of the set, funny enough. I'm still not sure what to expect when I press play on his music, but based on what I know from this card, I'm expecting something along the lines of Jesus Jones and EMF.. other UK electro-pop from that time that I'm familiar with.

Here's the point where I go to Spotify and listen to what they've got as the most popular few songs of his available.

Oh wow, looks like he's still active, with a release out just this year. Good for him!

Looks like his biggest hit by a wide margin was "Killer" off the Doctor Adamski's Musical Pharmacy album (1990) [that explains the card's weird back picture.. it's the album cover]. The song's got over 10 million plays! I was thinking, "Wow, he sounds a lot like Seal." But no, it actually is Seal providing guest vocals on an Adaminski track.

The 2020 release is called Free to Kill Again and looks to be an album of remixes of that "Killer" song. Hmm, that's kinda sad.

His second most popular song on Spotify is a modern remix of "Killer". I like this "re-dub" version a little more than the LP version, but honestly neither are really grabbing me.

Seal, by the way, has no cards in the standard MusiCards set, but has four cards in the UK edition. I hope I live long enough to eventually cover those on the blog-- let's be real, at the pace I'm going, it'll be several years from now-- because I really like a few Seal songs (and get chagrined whenever anyone refers to him as a one-hit wonder... I remember a few of his songs getting lots of radio play when I was younger, not just "Kiss From a Rose".) 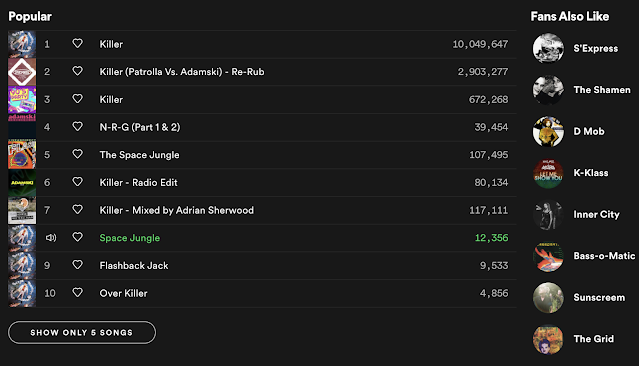 So (over) half of the top 10 songs on Adamski's Spotify page are versions of "Killer".. I guess it must've been a big hit overseas, but I don't recall ever hearing it before. It's getting a "meh" from me today, but maybe if my local radio station was playing it regularly back in the day, it would have won me over eventually. I mean, I love me some Paula Abdul songs, as we've covered over the previous three posts, but if I was hearing them for the first time today, I doubt they'd do much for me. Timing is everything. He just didn't seem to hit in the US. (Again, funny he got a US MusiCard, but not a UK one.)

I'm trying to go into it with an open mind, but yeah, not really feeling the Adamski songs I'm listening to right now as I draft this post. Not terrible, but nothing I see myself ever wanting to give a second listen. If any big Adamski fans are reading this, I feel like I should apologize to you, but hey, nothing personal. I'm also not really familiar with any of the artists in the "Fans Also Like" (pictured above, far right), so maybe this just isn't my scene. Never been much of a raver.

According to his Wikipedia entry, as of early 2020, Adamski "has been spending time in the studio writing and producing songs for the next highly anticipated Kylie Minogue album." That's cool. (Like Seal, Kylie isn't in the US MusiCards set, but has 4 cards in the UK edition.)

I think my initial assumption of him sounding something like Jesus Jones and EMF was pretty close, honestly.. but with less guitars. And by the way, those are a couple more artists not in the US set but in the UK set. Really adds to my feeling that Adamski is out of place in the US checklist and would have made a lot more sense in the UK edition. Kids opening packs of the stuff in England at the time would have likely been much more familiar with him than American kids were, I'm sure.

I think I'm just going to end this post here with no Custom Corner, but seeing as I've run out of things to say about Adamski, I should come up with a good accompanying Custom Corner for the next card-- Adamski again-- or else it'll be a very short post, lol.

What do you say, readers.. Are any of you Adamski addicts? If so, any favorite tracks besides "Killer" (or the other few songs in the above top ten) that I should check out? Or are you like me and are only now learning about him for the first time thanks to this card?

Email ThisBlogThis!Share to TwitterShare to FacebookShare to Pinterest
Labels: Adamski, pop, Seal, who?