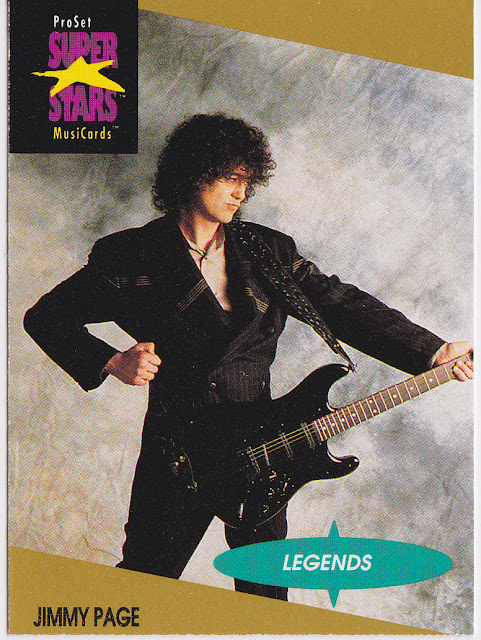 Led Zeppelin guitarist Jimmy Page graces card #17 in the 1991 Pro Set MusiCards set. This is obviously from a promo photoshoot based on the backdrop. Kind of an awkward pose. Can almost picture him singing the "I'm a Little Teapot" song.

Buckle up, because we're entering The Zeppelin Zone with this set. Jimmy has another card up next at #18. And shortly following that (after a couple cards for The Who), his band Led Zeppelin has a DiMaggian run of five consecutive cards. Plus we'll later hit a Historic Concerts card for them and then later a promo card (I plan to hit the promos at the end, giving me ample time to scoop them up-- I'm still working on building a "master set" of MusiCards). But yeah, that's a whole lotta Led. 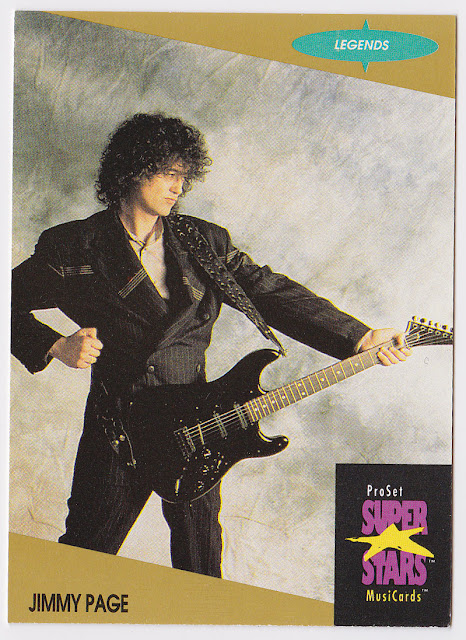 Yep, we've hit another variation. As with most variations in this set, the Super Stars logo travels from the upper left down to the lower right. The photo shifts to the left (revealing the head of the guitar) and the teal "Legends" banner shrinks a little and jumps to the top.

For easy comparison, here's a gif of the two cards. 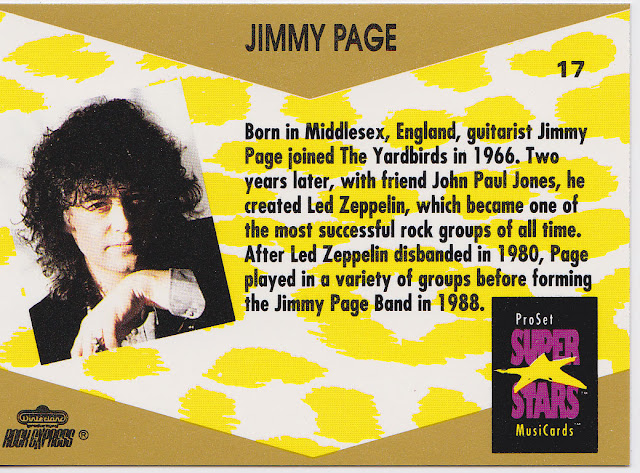 Of course I'm familiar with Led Zeppelin, but gotta admit I've never heard of the Jimmy Page Band. Seems like his career has been relatively quiet since Zeppelin broke up way back in 1980. I know he's popped up once in a while here and there over the years, but seems he hasn't really done anything big in the past 40 years, which is kinda surprising for a guitarist of his stature.

Well hey, we've still got a whopping 8 cards in the pipeline to cover Page and his main band's work, so I'm just going to put a pin in it for now and jump right into the Custom Corner.

Today's bonus band was likely influenced somewhat by Zeppelin, with many sprawling rockers in their catalog, but mainly I'm choosing them to feature now because I saw these guys live just the other day and wanted to post about it here. 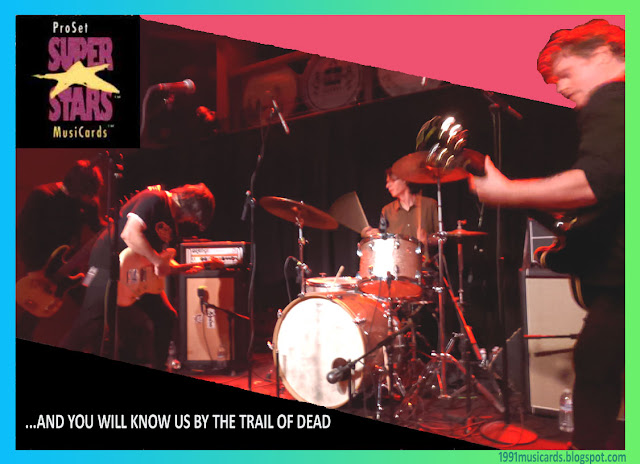 ...And You Will Know Us By The Trail Of Dead (often shortened to Trail of Dead) might have a long, scary name, but they're a band of good dudes who rock out. They're not super well-known, but they make my short list of bands I would enthusiastically recommend to anyone into rock music.

I was first introduced to their music in the late 90s by my friend David DeVere who was a big fan of theirs. Dave wasn't at all shy online, so I'm sure he wouldn't have a problem with me using his full name here. We were online buddies for a few years and shared a lot of cool music with each other, but eventually we lost touch. I tried to reconnect a while back, but his email address had gone bad, and attempts to find him on social media have been a dead end. Davy, if you're out there, drop me a line and let's catch up!

As 2019 was winding down, I came to the grim realization that I hadn't been to a concert all year. And yep, 2019 ended up being the first year since 1994 that I went a full calendar year without going to at least one live music show. (I went to 3 stand-up comedy shows during the year, for what it's worth, but it's not the same thing.) Man, the younger version of myself would be sickened by this! I love live music, damn it! Feeling the need to end my dry spell, I secured a ticket to Trail of Dead for January and I'm glad I did.

It was such a great show. Sold-out crowd. I got lucky with a front-row spot and had a great time up in the thick of it. They were loud as fuck so I'm glad I brought ear plugs to protect my hearing (sorry; old fart alert). But man, having the drums/bass thumping away in your chest during a badass jam is such a great feeling. The band rocked to perfection, and it was cool how the guitarists all took turns on drums (3 of them).. impressive versatility. I had to wake up early the next day for a work thing, but no regrets.

What's really cool is I get to use my own photos for the custom(s). Sure there are countless better photos of the band to be found online, but it's awesome to be able to make it a fully in-house project. I've made hundreds of custom cards at this point in my life, yet I think these are the first made using photos I took myself. Pretty neat. 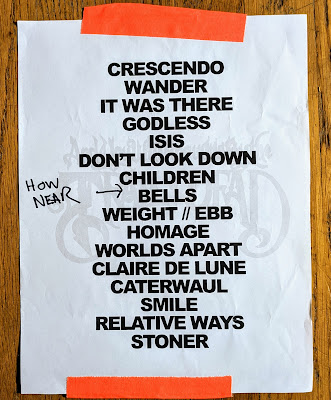 I even snagged a setlist from the stage immediately after the show. I've got a decent little setlist collection (highlighted by Weezer, Mercury Rev, and Rocket From The Crypt), but I don't think I've added to it in the past several years (not since I moved to Portland in 2009?).


Trail of Dead - "Into the Godless Void"

As far as a rundown of the band's history, well here's the first paragraph of their Wikipedia entry:
...And You Will Know Us by the Trail of Dead (often abbreviated as Trail of Dead) are an American alternative rock band from Austin, Texas, formed in 1994. The chief members of the band are Jason Reece and Conrad Keely. The two alternate between drumming, guitar and lead vocals, both on recordings and live shows. The band is known for their wild, energetic concerts. Their tenth studio album, X: The Godless Void and Other Stories, was released on January 17, 2020.

Now I'll try to narrow my favorite songs of theirs down to an album's worth.


Ok, there's a solid "best of" collection right there, but man.. every album is a banger. Engaging music, thoughtful lyrics, a few "out of left field" sounding songs to shake things up.. just great stuff. Again, I can't recommend them enough if you're into alternative rock at all. Terrific band.

If I ever end up doing a podcast/youtube version of this blog (which I probably won't, but never say never), "Summer '91" would be a perfect theme song to use. Its cautiously nostalgic head-nod to 1991 fits right in with our look back at the 1991 MusiCards set... plus it rocks. So yeah, I could totally see that being used as intro and/or outro music in a podcast-type situation.

That's going to wrap up this post. Sorry if I layed on my love for Trail of Dead a little thick! Over the past few years, they've really risen up the rankings of my all-time favorite bands, so I hope I've at least convinced someone reading to give them a curious listen, and maybe even find themselves being a new fan.

As always, please comment away below if you have any comments to comment. Otherwise, see you soon with card #18 which is Jimmy Page again.
at February 04, 2020

Email ThisBlogThis!Share to TwitterShare to FacebookShare to Pinterest
Labels: ...And You Will Know Us By The Trail Of Dead, Jimmy Page, Led Zeppelin, Legends, variation alert