Pro Set showed plenty of love to The Doors, and now we're on to the 3rd (of 4) consecutive cards they got in the Legends subset. It's a pretty standard band promo photo. Nice of Ray to hunch down a bit to fit in the SuperStars logo. 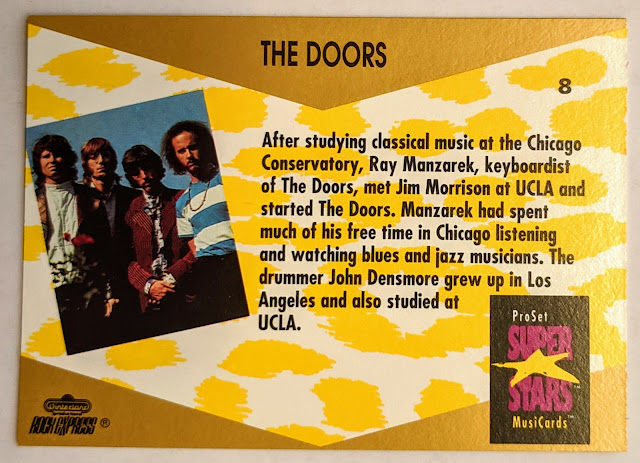 The back features another posed band photo and a little write-up on how the guys got together.

Since I've said pretty much all I've got to say about the Doors over the previous couple posts, I thought I'd take a look at other trading cards that card-collecting Doors fans might have on their radar.

As far as I can tell, there aren't other mainstream Doors cards out there (please correct me in the comments if I'm wrong), but I've found a couple Jim Morrison oddballs:

If you go searching for Jim Morrison cards, there are plenty of results that pop up... but they're mostly of other people named Jim Morrison who might seem strange to Doors fans: 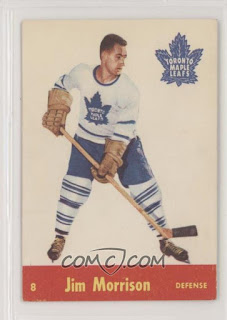 In hockey, Jim Morrison (James Stewart Hunter Morrison) played in over 700 NHL games in a career on the ice that stretched from 1952 to 1973. 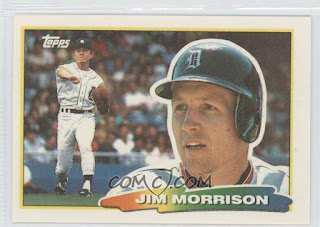 In baseball, Jim Morrison (James Forrest Morrison) was an infielder who played in the majors from 1977-1988. 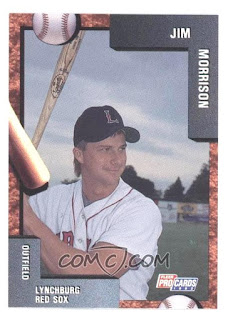 Another Jim Morrison (James H. Morrison) played in the minors 1986-1993, though he never made the bigs.

And there are plenty of other prominent Jim/James Morrisons in history who probably don't have trading cards.

I think you'd have to be a majorly obsessed Doors fan to collect cards of other guys named Jim Morrison, but it could be a fun "minicollection" to work on. The hockey Jim Morrison cards can set you back a few bucks (with many of which being vintage hockey cards from the 50s and 60s), though the baseball Jim Morrison cards are plentiful and generally inexpensive.

Other than any Jim Morrison cards in my baseball setbuilds, I've got only one other card in my collection that makes me think of the Doors... 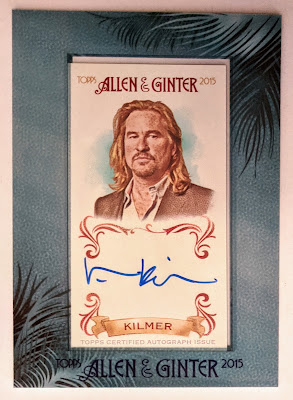 Scored this 2015 Allen & Ginter framed mini autograph in a big trade a few years ago. Val Kilmer of course portrayed Morrison in the 1991 biopic directed by Oliver Stone. 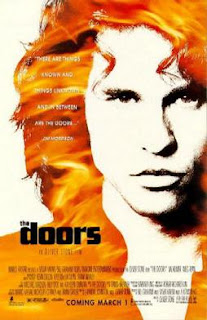 The film received mixed reviews, but I liked it a lot. My buddy Doug owned it on VHS and would pop it in from time to time.

The Misfits might not have a direct link to The Doors, but I've always thought Glenn Danzig's voice reminded me of Jim Morrison. Like, if a young Jim Morrison started a punk band, it'd probably sound something like the Misfits. (Ultimately, both probably owed a debt to Elvis Presley for their vocal style.) And plus, this is my Halloween post here on the blog, and as a band in the "horror punk genre", the Misfits felt like a good fit for today.


As I mentioned in the previous post, I was personally never much of a punk rocker, but still enjoyed a handful of punk bands. The Misfits were a band I was aware of-- that creepy logo was frequently seen on patches sewn onto jackets and backpacks of punkers in high school-- but I didn't really check them out for myself until well into my 20s.

If you care to dig into the history of the Misfits, I'd point you to their Wikipedia entry, but I'm not the guy to ask for details. But I can tell you they originally formed in New Jersey and were active 1977–1983. Then after a period of inactivity and legal spats, the band was resurrected in 1995 without Danzig (who drifted away from punk and towards metal for his subsequent albums-- I'll have to take a closer look at his solo career in a future post). Misfits fans are generally much less enthusiastic about this later version of the band, but I suppose that's to be expected. In 2016, Danzig reconciled with the other guys and "The Original Misfits" reformed and did some touring. I think they're still doing shows together as of 2019.

Since the first Misfits custom I whipped up features the early incarnation of the band, I figured I'd also do one with a more recent photo.

Tracks 1-13 are from the classic-lineup run, while this hypothetical compilation is rounded out by a few later (non-Danzig) tracks, 14-20. These are just my personal picks, likely to upset any diehard Misfits fan, but hey, it's my blog. lol

Any of you readers into the Misfits?
In any case, hope you have a Happy Halloween.
at October 31, 2019

Email ThisBlogThis!Share to TwitterShare to FacebookShare to Pinterest
Labels: Legends, Misfits, The Doors