The fourth card in the set is Crosby, Stills & Nash. This monochromatic shot seems to be a contemporary photo. It's their only card in the set (though related band The Byrds have a Historic Concerts card at #256). 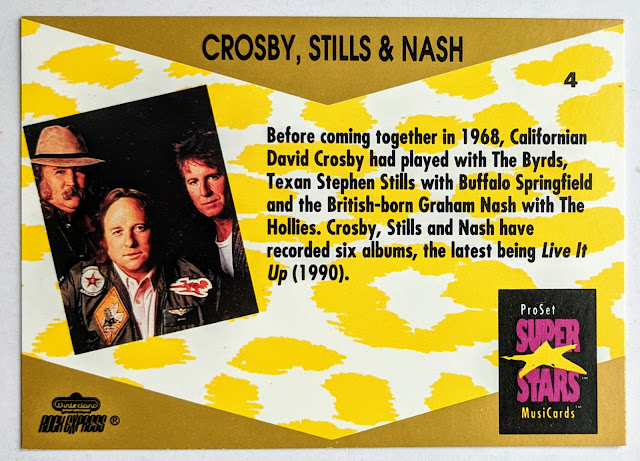 I think Crosby, Stills & Nash were one of the first "supergroups" in rock, made up of singer-songwriters David Crosby, Stephen Stills, and Graham Nash. These guys are all twice-inducted in the Rock & Roll Hall of Fame, both for their earlier bands (mentioned on the back of the card) and as members of CSN.

Check their Wikipedia entry for more of the band's history, but the short version is the three heavy-hitters teamed up in 1968 and became a major force on the folk-rock scene with their self-titled debut album in 1969. It spawned two Top 40 hits ("Suite: Judy Blue Eyes" [#21] and "Marrakesh Express" [#28]). Other great songs followed on subsequent records, including "Teach Your Children", "Our House", "Just a Song Before I Go", "Long Time Gone", and "Southern Cross".

I like all these hits of theirs, with "Suite: Judy Blue Eyes" probably being my favorite of the bunch. It makes you wait for it, but when that satisfying last part kicks in ("do do do-do do"), it can't help but put a big smile on your face. That's another instance of where I was familiar with a short clip as a kid thanks to it being used in a TV commercial (either for a Time-Life Music collection [Freedom Rock, perhaps?] or maybe a spot advertising a radio station). It was an epiphany when I eventually heard the full song finally years later. The ending part kicked in and I was like, "Oh hey, it's that one song from TV!"

Crosby, Stills & Nash has been on-again/off-again as an active band for over 50 years now. They've released two studio albums since this card came out: After the Storm (1994) and Looking Forward (1999). As of 2019, all 3 members of CSN are still kicking in their 70s (Who would've thought David Crosby would make it this far?!). They've performed together as recently as 2015, though some bad blood between members may make further reunions unlikely.

Neil Young was/is an occasional member of the band over the years (transforming them into Crosby, Stills, Nash & Young when he's in tow.) On November 3, 1991, CSNY reunited to play the Bill Graham memorial concert at Golden Gate Park in San Francisco. But as reflected on the '91 MusiCard, Young wasn't a regular member of the group at the time. 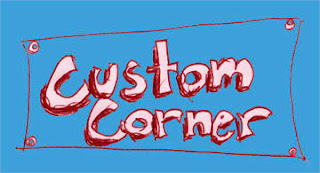 Not only is Neil Young not featured on the CSN card, he doesn't have his own card in the set (nor is there a card for his bands Buffalo Springfield or Crazy Horse). So he's the obvious choice for this post's custom card creation.

That would have been a cool card to pull from a pack!

I like CSN fine, but I really like Neil Young. Growing up, my mom owned After the Gold Rush (1970) on vinyl, though I don't remember us listening to it very often. Then as a teenager in the mid 90s, my buddy Doug bought a used cd of the hits/rarities compilation Decade, though it was only the second disc of a 2-cd set. Back then, I was somewhat familiar with Neil Young, but mostly because his songs had been covered by some of my favorite bands at the time, such as the Pixies recording "Winterlong" and "I've Been Waiting For You" as b-sides, and Pearl Jam often performing "Rockin' in the Free World" in their live sets around that era. But I also dug that badass "This Note's For You" video that MTV or VH1 played once in a blue moon. Oh, and my mom owned the Philadelphia soundtrack cd that included Young's title track.. I liked that tune ok.

But yeah, that Decade (disc 2) was really what turned me onto Neil Young. I burned myself a copy of Doug's cd.. it was one of the first burnt cdrs in my music collection and it got a lot of play from me. I'd often listen to it while falling asleep, since it has a lot of good mellow songs-- though inevitably I'd be shaken awake when "Like a Hurricane" started blaring. LOL. I might have to go with "Cortez the Killer" as my favorite cut.

I eventually got my hands on more of his stuff, including Harvest (1972) and On the Beach (1974), later diving deeper to his discography. 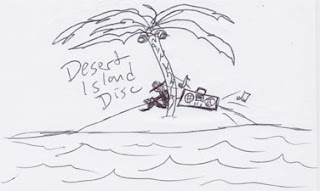 
I like a ton of Neil Young songs, and so trying to narrow down my favorites to 20 tracks is gonna be tough. Here we go...

This is sort of "disc 2 of Decade on steroids", as over half these songs are from that cd. It wouldn't be too hard for me to do another disc coming up with 20 more of his songs I like a lot, but we'll call it good with this.

How 'bout you? I'd be interested to hear what your favorite CSN/CSNY/NY songs are in the comments.

Love this cover of "Winterlong" with Kim Deal on lead vocals.

And speaking of Neil Young tunes sung by women, here's a bonus cover: Fiberoctopus-Harvest_Moon.mp3 - This is a recording of "Harvest Moon" I made back in 2010 with my friend Karie on lead vocals. My guitar work is a bit sloppy as usual, but overall I'm pretty happy with how the track turned out.

Next up are the Doobies.