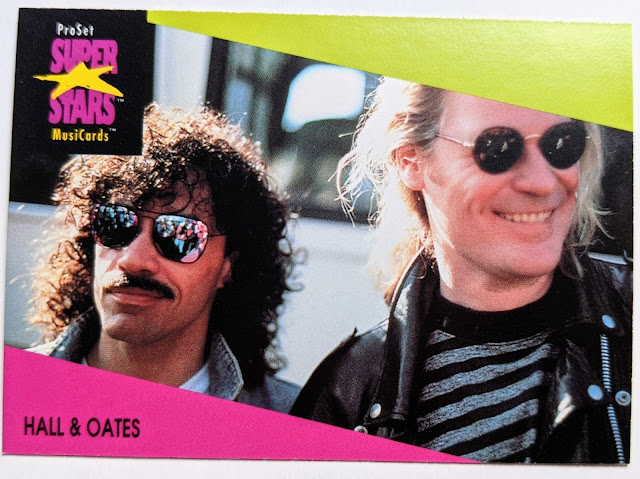 Today's forecast calls for a double dose of Hall & Oates. We start with 1991 Pro Set MusiCards #48. This photo feels cramped, like it probably should have been zoomed out instead of blocking out chunks of the duo's heads. John Oates smirks while Daryl Hall seems a little out of focus. Best thing about this photo might be how you can kinda see the photographer in the sunglasses reflection. 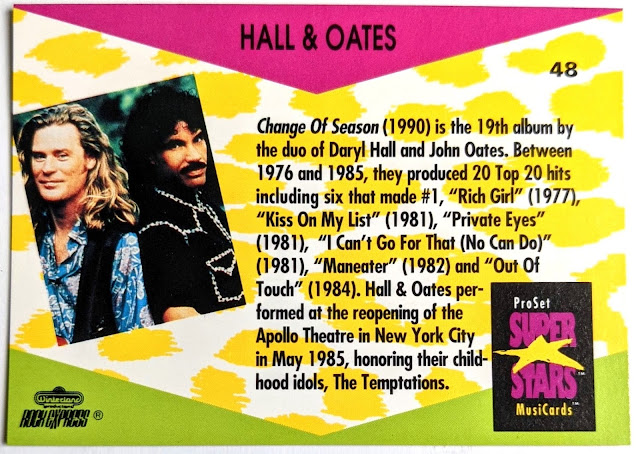 The glasses are off on the back photo featuring a classic back-to-back pose. The write-up reminds you they were a hit-song powerhouse from the late 70s through the 80s. Their days lingering in the Top 10 were behind them by the time this card was being pulled from packs, though their current LP at the time, Change of Season, did spawn the #11 single "So Close", their final Top 40 hit.
I liked "So Close" a lot.. not enough to buy the CD or single, but enough to tape it off the radio in my waning days of tuning to pop music stations. In fact, the version I'm most familiar with features the local San Diego DJ chatting over the intro section (not the slow part in the video, but the main part that starts with the drum hit), smugly talking about how the Dodgers lost... but he stumbles on his words a bit and ends up finishing his sentence over the first line of the song-- one of the worst sins a DJ can make! 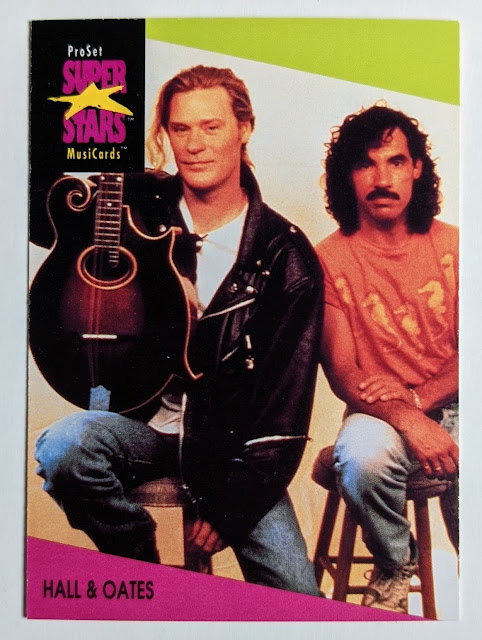 Here's card #49. The guys seem to be bored of posing for the photoshoot. Oates smirking in the background again, while Hall shows off the unusual guitar in his possession. 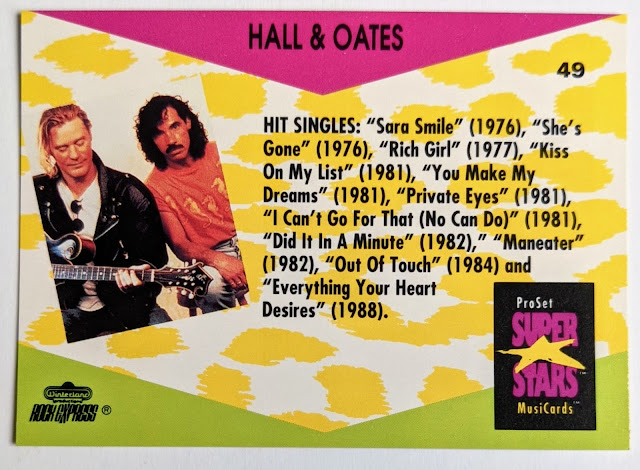 The back photo is from the same shoot, but now Hall is messing around on the ax (Is that an 8-string guitar? crazy), while Oates dares you to talk smack about his seahorses t-shirt.

Only the coincidentally titled "Say Say Say" by Paul McCartney featuring Michael Jackson managed to keep "Say It Isn't So" from the top spot for a span of four weeks on the Billboard Hot 100.

Things quieted down for the band after these MusiCards came out, not releasing another studio album until 1997's Marigold Sky, which didn't make much of a splash. (I'm listening to it for the first time while drafting this post, and it's not too bad.) But they're still at it all these years later. They've both put out a few solo albums, too. I've heard good things about Live from Daryl's House, the show where Daryl Hall jams with other great musicians, though I haven't watched much of it yet.

What's your favorite Hall & Oates song? "You Make My Dreams" (peaked at #5) is probably mine.

Just a fun song that always seems to improve my mood, even if somewhat overplayed at this point. 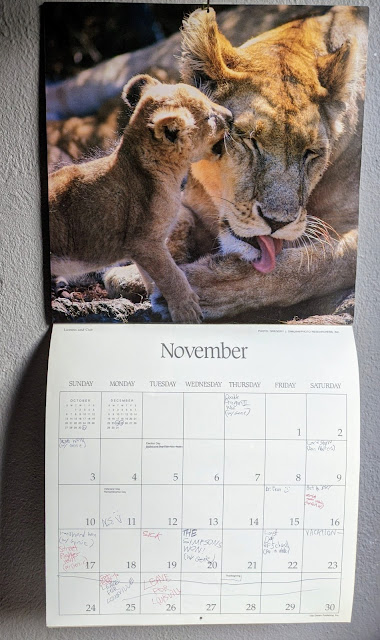 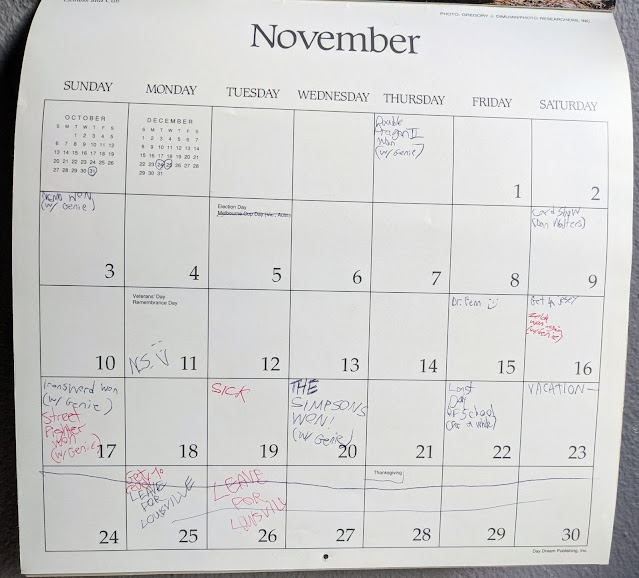 Lots of NES action for me this month, playing through Double Dragon II, Little Nemo: The Dream Master, Legend of Zelda, Ironsword: Wizards & Warriors II, Street Fighter 2010, and Bart vs. the Space Mutants. You can see I wasn't above cheating using a Game Genie. If you're not familiar, it's a device you plug a game into that lets you enter cheat codes for stuff like infinite lives or mega jump. I've never been that great of a gamer, or had the patience to play games for hours on end to really get better at them, so I was happy to get a leg-up thanks to cheat codes, and still to this day I'm not above codes and save-states when I play video games. I realize it's more rewarding to beat a tough game fairly, but for me it just doesn't outweigh all the time and frustration of dying a hundred times. But I feel guilty enough to notate "(w/ Genie)" when I make the claim to have beaten a game, even though that's usually my default, lol. Bart vs. the Space Mutants (the first Simpsons game on Nintendo) is an especially brutal game to complete, even with Genie codes, so it's worthy of the all-caps and exclamation point I've given it here on the 20th.
Oh hey, cool for me to discover the specific day I got Dan Walters' autograph (11/9/91). I wrote a big ol' post about it on Baseball Card Breakdown last year after he passed, but I had misestimated the timeline as summer of '92. I've now added a little note with the card in the Walters PC so I won't forget again. I got a total of 4 in-person baseball autographs during my childhood stint of collecting, but my memory is blurry as to the order I got them, and I'm hoping to one day have it all sorted out. At least now I can confirm Dan Walters came before the still-unidentified old-timer Indians coach I got at a spring training game in '92.
Dodgers fans like Night Owl may be pleased to see I acquired a Los Angeles jersey on 11/16. I really was a "baseball fan" first-- back then and still today but less so-- rockin' gear of several different teams, naively unburdened by any rivalries.
Then we took a vacation to Louisville for a big family Thanksgiving. That trip was notable for meeting my cousin's newborn Alexis. She's all grown up now, finally getting married next year to her long-time baby-daddy. (I only remember this trip now from looking at my old photo album. I bust it out to confirm '92 was a year I went to Arizona and therefore the year I caught a spring training game in Yuma. I was also curious if the smiley face I doodled by my orthodontist [11/15] signified me getting my braces off that day, but no, looking at photos from Xmas '91, I was still a metal-mouth.)
Anyways, we'll close out this old calendar shtick next month with December 1991 and another MusiCard. Thanks for stopping by and don't forget to let me know what you think about Hall & Oates in the comments if you wanna.
at November 28, 2021