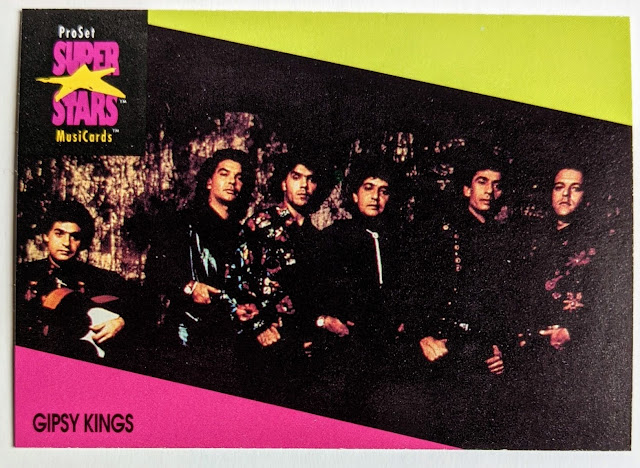 I wasn't familiar with the Gipsy Kings outside of putting this set/blog together, but turns out they've been at it with a poppy interpretation of flamenco music since well before this card came out and they're still active today. 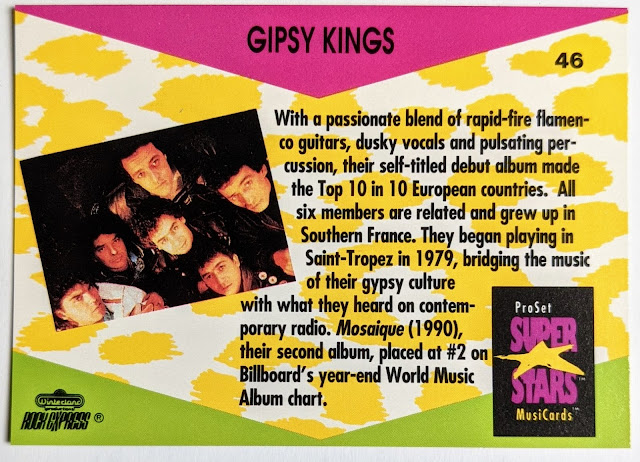 Their recordings have been used in popular movies, so I'm sure we've all heard them even if we don't realize it. The Big Lebowski ("Hotel California"), Toy Story 3 ("You've Got a Friend in Me"), and 2016's Sing ["Bamboleo"].

I don't mind this type of music, though I don't typically seek it out or know much about it. I've listened to a couple Gipsy Kings albums on Spotify while drafting this post, and I've enjoyed it all fine, but not sure they'll stick in my regular rotation or anything.

So yeah, not a lot for me to say about MusiCard #46 here. You can read more about this long-running family band at the Gipsy Kings Wikipedia entry.

Oh, here's something I whipped up for a quick Custom Corner... 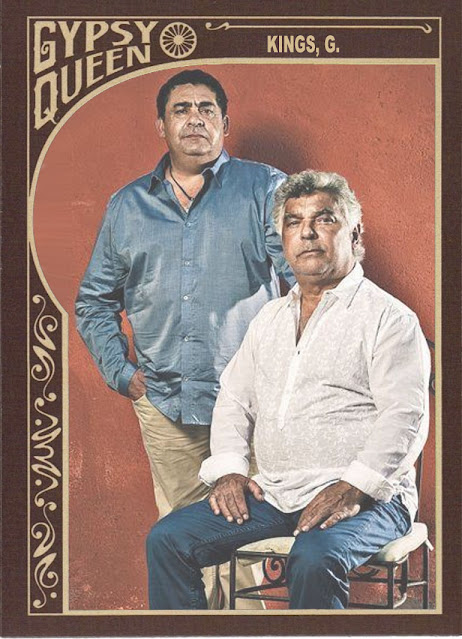 How could I not?! Had to make a Gypsy Queen Gipsy Kings card. I believe these gentlemen are the remaining original members. 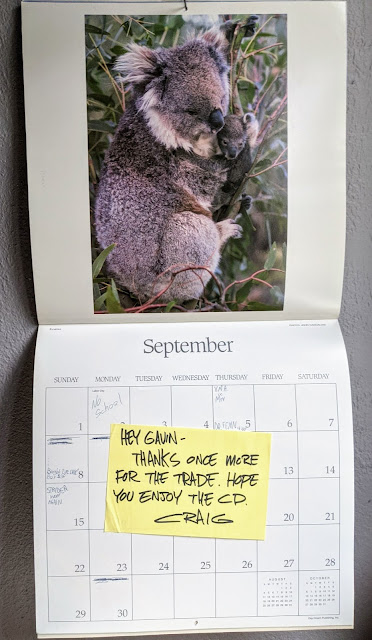 Ha, I had no idea that note was hiding in this old calendar of mine until I went to take a photo of September. Must've stuck it there for semi-safe keeping. I generally don't save "thanks for the trade" notes (though I appreciate them, don't get me wrong), but this one is from a famous person, so it was too cool for me to throw away. Craig here is Craig McCracken, best known as the creator of The Powerpuff Girls and other very successful animation work. We were online acquaintances for a few years back around the turn of the millenium, brought together by our shared love for the music of Frank Black. I traded him plenty of rockin' live recordings and oddities I'd collected of Mr. Black, and Craig hooked me up with lots of cool Cartoon Network swag and other fun stuff, such as a copy of the Heroes & Villains compilation CD he put together with some of his favorite bands contributing songs about the Powerpuff Girls, which I believe is the context of this note.
Craig also drew a couple original pictures for me and gave me a PPG animation cel, all among my most-treasured collectable keepsakes. (I've showed off some of these a few years ago on my other blog.) His new show on Netflix is called Kid Cosmic and I don't think you can find a better "for the whole family" cartoon out there these days. Very well done all around and worth doing yourself a favor by watching. (I'm still finishing up season 1, though season 2 recently dropped to rave reviews, and a third season is forthcoming.)
Anyways, let's remove the sticky note and take a look at what I was up to 30 years ago.. 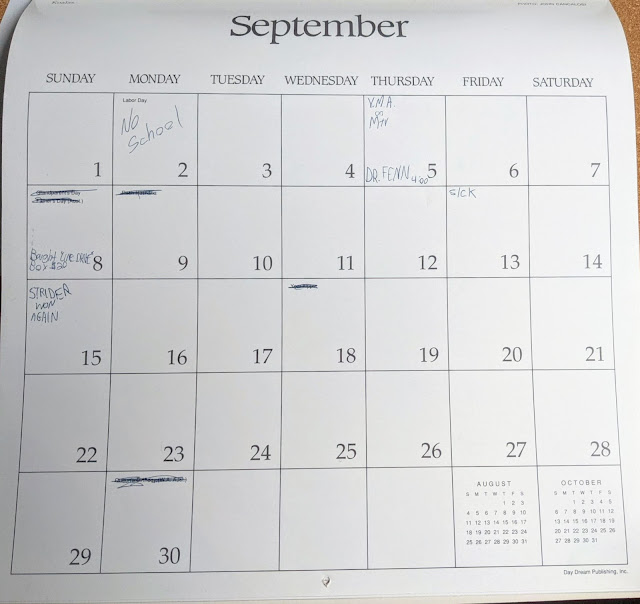 Pretty slow month compared to August from a couple posts ago. Summer fun gave way to back-to-school. On the 5th, I got to endure sore teeth from a braces tightening before tuning into the Video Music Awards on MTV later that evening.
Highlights from the VMAs that year included the return of Pee-wee Herman after the unpleasantness in the naughty movie theatre. Notable music numbers performed at the Arsenio-hosted show were "Poundcake" by Van Halen, "Enter Sandman" by Metallica, and "Gett Off" by Prince with his butt-cheeks out. 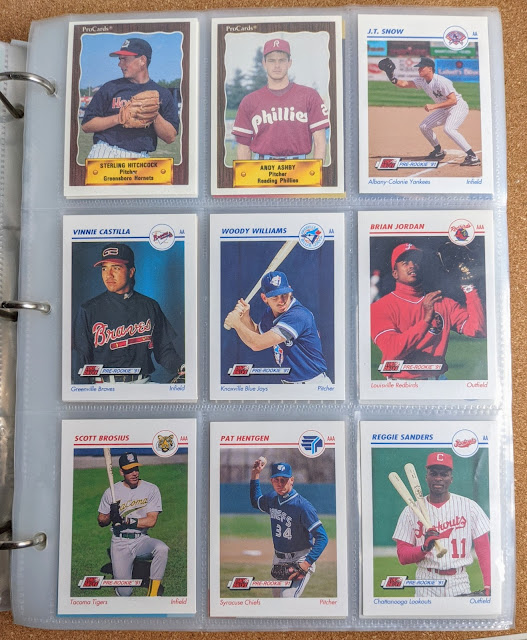 I bought a box of Line Drive minor league baseball cards on the 8th for $20. It was probably a situation where I was browsing at the local card shop, PV's Baseball Cards, and I made Paul an offer of $20 for the remainder of an open retail box. I remember doing that occasionally as a kid. Not quite ponying up for a sealed box, but getting a nice per-pack discount by taking a half-full box. This was the 1991 Line Drive "Pre-Rookie" set that mixed AA and AAA players. The above 7 cards might be all I've hung onto from the 30-year old purchase-- a few guys who went on to solid careers-- found in an old binder of mine. 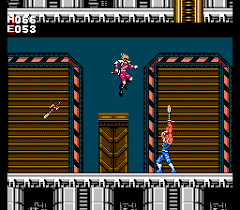 Then on the 15th, I beat the NES game Strider again (so, not for the first time, but not sure if 2nd, 3rd time, or what). Strider is still one of my all-time favorite video games. I just played through it yet again one evening last month. I consider it almost a companion game to Bionic Commando, another late 80s game Capcom put out for the Nintendo Entertainment System. Both have great music, engaging action, semi-non-linear gameplay, and are a lot of fun. The jumping control might be what prevented both games from being more popular. Your guy can't jump in Bionic Commando, but rather you swing around with a go-go-gadget robotic arm, sort of like Spider-Man and his web slinging. In Strider, you can jump, but the game designers kinda shit the bed on the jumping control and it gets a little glitchy at times. But besides that occasional frustration with tricky jumps, and perhaps some bugs with special item usage, it's a terrific game. It's not exactly a well-remembered game today, at least not the Nintendo version, though the arcade and Genesis versions (both plenty different than the NES port) tend to get more respect.

I didn't have it marked on the calendar, but 9/26/91 would become kind of an important date for me because it marked the final concert of Jane's Addiction, who I would get really into as the 90s progressed. Basically for the years that I wasn't collecting baseball cards, I was collecting Jane's Addiction bootlegs instead. At my peak, I owned damn-near every live recording of theirs that was in circulation amongst fans (and several super-rare ones that hardly anybody else had). Over the years, my obsession faded and the band has done various half-hearted reunions, but 9/26/91 still sticks in my head as an important date, and since I notice it's the 30 year anniversary as I write this, figured I'd mention it.

That's it for this post. Any of you readers into the Gipsy Kings? Ever rip any '91 Line Drive packs? Ever play Strider?