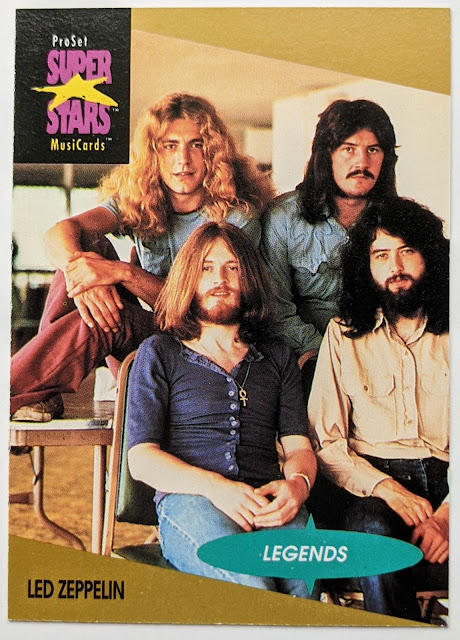 Number 24 in the 1991 Pro Set MusiCards set is another Led Zeppelin card. This one features a wholesome posed photo looking not too far from a Sears shoot for a family Christmas card or something like that. 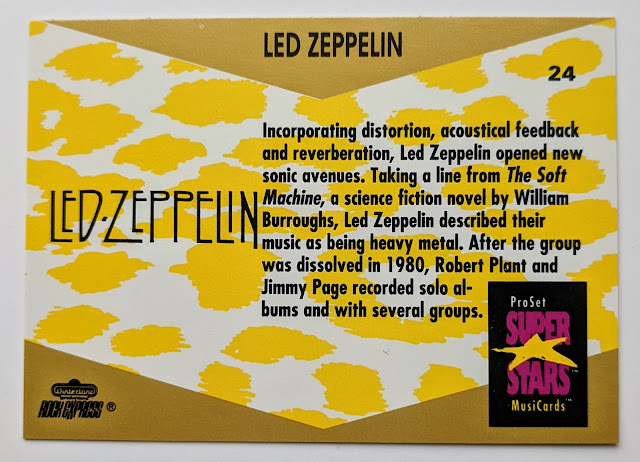 No second photo on the back this time, but rather a wordmark/logo. The blurb seems to credit Zeppelin for coining the term "heavy metal" for hard rock music, though I'm not seeing anything to back that up on Wikipedia's heavy metal music entry, instead crediting producer Sandy Pearlman for using the term to describe The Byrds. 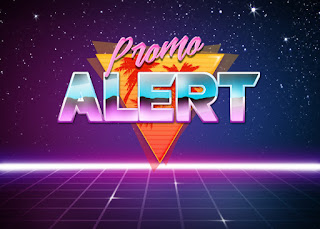 We've come to the first card that has a corresponding promo! Let's take a look at the relatively-rare early version of this card... 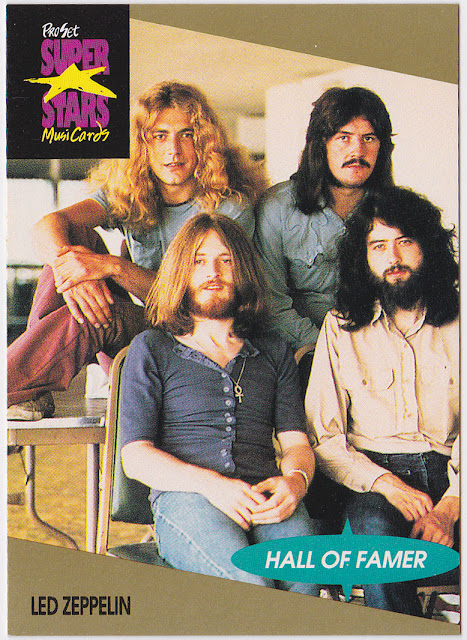 The front is very similar to the base card, though note the different font for "Pro Set" and "MusiCards" in the logo, plus instead of "Legends", it's marked "Hall of Famer" in the teal bubble.

The Rock and Roll Hall of Fame Foundation was established on April 20, 1983. The museum in Cleveland didn't open till 1995, which was the same year Led Zeppelin was inducted. So technically they weren't Hall of Famers at the time this card was created, which might be a reason Pro Set switched the subset name to "Legends" instead. 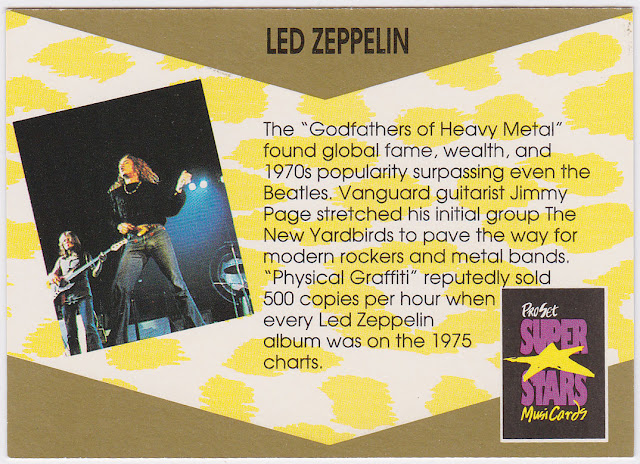 The easiest way to spot these promos is they are unnumbered. Some other minor differences on the back, but the basic layout isn't too far from the mass-produced finished product.

I believe these promos were available with the Pro Set Gazette magazine/catalog thing, but couldn't say for certain. There are another group of MusiCards promos with a completely different design (that are numbered), but that's for another day. Actually those would be the "first promo set", so this Zeppelin is actually part of the "second promo set". Kinda confusing.

Since the back of the promo card mentions Physical Graffiti, here's one of the best-known tracks off that double LP.

"Kashmir" was an idea from Page and Bonham, and was first attempted as an instrumental demo in late 1973. Plant wrote the lyrics while on holiday in Morocco. Jones played Mellotron on the track, and arranged strings and brass parts that were played by session musicians. The song was one of the most critically acclaimed on the album, and was played at every gig from 1975 onwards. Page and Plant played it on their 1994 tour, and it was reworked in 1998 by Sean "Puffy" Combs for his single "Come With Me" which featured Page on guitar. [wiki]

The back of the featured card in this post mentions the origins of the term heavy metal in regards to music. So let's go with Steppenwolf, who were the first band to mention "heavy metal" in lyrics.


Steppenwolf - "Born to Be Wild"

"Born to Be Wild" was a solid hit for Steppenwolf in 1968, and the song gained even more popularity by being featured in the 1969 film Easy Rider. It's sometimes described as the first heavy metal song, and the lyric "heavy metal thunder" (describing a motorcycle) marks the first use of this term in rock music. 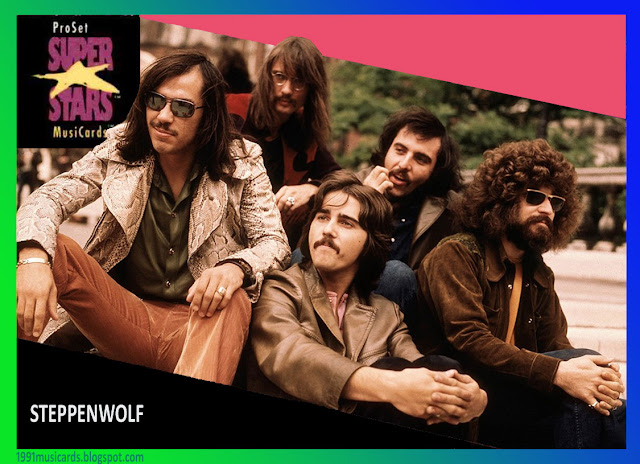 The band originally split after a farewell concert in Los Angeles on Valentine's Day in 1972, but later reunited in various forms over the years. Lead singer John Kay (now 76) is the only original member these days, and he announced last year that the band would no longer perform live.

I don't know much about Steppenwolf other than their few hit songs, but let me know in the comments if you've got any lesser-known favorites of theirs I should check out.

Just one more Led Zeppelin Legends card up next, then we'll dive into the pop music section of Series 1. Stay tuned!
at July 25, 2020